Utility CenterPoint Energy Inc. said on Thursday it agreed to sell its natural gas distribution businesses in Arkansas and Oklahoma to Summit Utilities in a $2.15 billion cash deal that could help fund the seller’s transformation strategy. 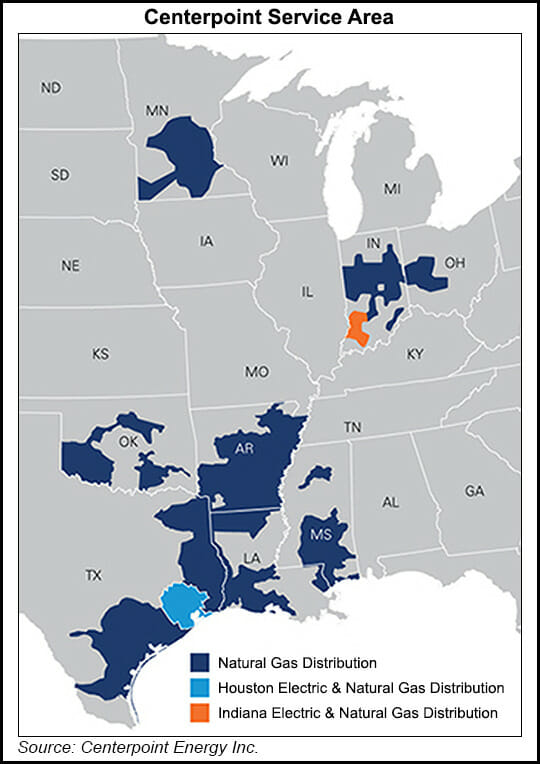 The assets include 17,000 miles of pipelines in Arkansas and Oklahoma, serving more than half a million customers. The sale is expected to close by the end of 2021.

The sale could hasten CenterPoint’s efforts, launched last year, to become more of a pure-play utility as it aims to grow annual earnings by up to 8% while adding renewable energy to its portfolio.

After selling its natural gas retail business to what is now Houston-based Symmetry Energy Solutions LLC last year, CenterPoint management in December told analysts it intended to sell the pipelines in Arkansas and Oklahoma as part of a plan to ramp up investments in the electric power business.

Companies across the energy spectrum are looking for ways to capitalize on consolidation opportunities in the wake of the pandemic and amid mounting pressure on public companies to divest or spin off carbon-intensive assets and reinvest in new growth paths. This includes renewable energy avenues that are likely to present long-term potential as the United States and other leading countries look to shift away from fossil fuels to slow climate change, said investment banker Jacob Thompson of Samco Capital Markets.

“Companies are really starting now to look harder at the future, what it will look like and what they may need to buy or sell to better position themselves,” Thompson told NGI.

President Biden in April pledged during the Leaders Summit on Climate that the United States would double its nationally determined contribution for greenhouse gas emissions to a 50-52% reduction from 2005 levels by 2030.

CEO David Lesar said CenterPoint, through the deal, would eliminate the Oklahoma and Arkansas storm-related costs “from our balance sheet.”

Houston-based CenterPoint said it would use the nearly $1.73 billion in cash proceeds to help fund $3 billion in previously announced new capital spending to drive growth opportunities in its electric business in Texas and Indiana.

The sale plan “demonstrates not only our ability to efficiently recycle capital across our utility footprint, but also our ability to execute on our commitments to our shareholders,” Lesar said.

Referring to a plan outlined at the company’s investor day in December, he said, “Our commitments include delivering annualized utility earnings per share growth of 6-8% and growing our rate base at a 10% compound annual growth rate. The ability to efficiently redeploy this capital and the eventual exit of the midstream investments will have no impact” on the targeted earnings growth rate.

CenterPoint said the sale proceeds represented a multiple of 2.5 times its 2020 rate base and 38 times 2020 earnings.