Permian Basin pure-play Centennial Resource Development Inc. expects a tsunami of natural gas within the next five months or so, which may force shut ins by any players not equipped with firm transportation (FT) agreements. It doesn’t plan to be one of them. 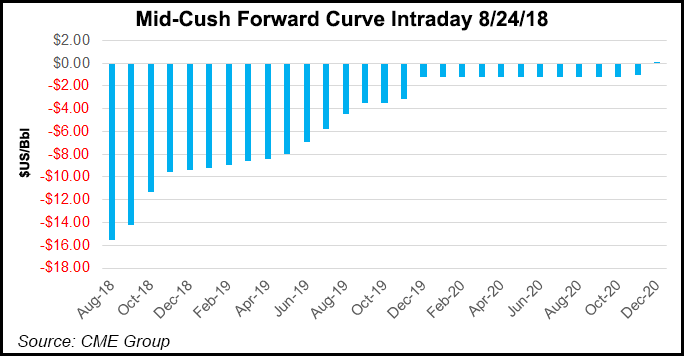 COO Sean R. Smith discussed Centennial’s progress in the Delaware sub-basin, where it plies its oil and gas development during a recent presentation in Denver at EnerCom Inc.’s The Oil & Gas Conference.

The company, which launched as a public exploration and production company in 2016, holds about 80,000 net acres in the Delaware, 90% operated. The main zone for development today is the Wolfcamp A formation in the southern Delaware.

“From an infrastructure perspective, we’ve got an advantaged situation relative to some operators in the fact that we’ve got essentially a built-for-purpose system both in the gas and the oil,” Smith said. “So, from a gathering perspective, we’re in a pretty good place.”

As CEO Mark Papa likes to say, Smith said, “we are debt hawks. We came into this basin as a company fully unlevered with zero debt, and we’ve maintained a very low debt position and will continue to maintain that position.”

Like the rest of the industry, Centennial is focusing on longer laterals and pad development, with an eye on moving into “more of a manufacturing mode” in 2019, Smith said.

Meanwhile, Permian oil and gas congestion is the “topic du jour for all the analysts. And we certainly talk about a lot internally as well.” About three years ago, he noted, when oil prices fell to the $40/bbl range, the Permian was “wide open…There was plenty of room for everybody…You could do anything you wanted to do out there from an infrastructure point of view.”

Today, however, check out any small West Texas town in the Midland area any day of the week around 2 p.m. The traffic situation is almost overwhelming as oilfield service trucks compete with the locals.

“These infrastructure constraints are not just on the surface, but also subsurface,” Smith said. “The point of this is that you don’t want to be trucking anything…”

The issue then is how is Centennial going to move its crude oil to market at an efficient clip?

“Centennial has positioned itself such that we don’t want to truck any of our barrels,” he said. “In fact, we truck very few of our barrels of crude, which is really our revenue-driver out of the basin.” In general, the company is “well positioned to market all of our crude inside the basin.”

It also doesn’t anticipate any gas constraints. EagleClaw Midstream Ventures LLC gathers most of the gas. It hooks to the wells almost “the day we put them on flowbacks, so we flare very little gas, and they have been a great partner.” The midstream company also processes natural gas liquids through a plant sited on Centennial’s acreage.

For crude, the company partners with Oryx Midstream Services LLC, which is gauging support for an oil gathering and trunkline system to carry supply from the Delaware.

For both EagleClaw and Oryx, Centennial has an area dedication but not volume dedication. “They are obligated to come to our wells, get our product to market and then transport to the local hubs.” For gas, that means the Waha, while oil is transported to either the Crane or Midland hub.

It does no good to gather the volumes if they can’t get to markets, Smith said. CEO Mark Papa has been “preaching a bit for maybe two quarters now about the gas, the looming gas bottlenecks that are likely to occur later this year and into next year…”

To resolve potential gas capacity issues, Centennial has 100% of its volumes covered through 2021, “either through firm gas sales contracts or firm transportation,” Smith said. “From a residue gas perspective, we are covered with those long-term sales agreements.”

“So, for the next several years, a large majority of our product is essentially guaranteed to get to points of purchase through these large agreements we’ve entered into,” he said. “Essentially, we de-risked our portfolios and said, ”we won’t have any shut-ins relative to gas.’”

As the expected bottlenecks begin to occur, producers may have to shut in wells.

“From a gas perspective, we think that’s an issue, and that’s going to come up toward the end of this year, beginning of next year,” Smith said. “From a crude perspective, I think everybody has seen the forecasts of what takeaway capacity is coming out of the basin, and it’s getting tighter and tighter, and it’s looming. It’s probably toward the end of this year where you can start again to see some major constraints.”

Centennial’s proactive move to lock in longer term contracts should allow production sales for the long haul, “which is first and foremost a priority for us.”

Still, the company has not taken out any West Texas Intermediate hedges or swaps, unlike many of its peers.

“I’m not knocking anybody from putting in hedges, it’s just that we don’t need to do that,” Smith said. “Because of the leveraged position that we are in, we have very low debt. So we don’t need any additional coverage on the back side. It allows us to see the upside swing in the commodity prices,” and for oil, “we’re seeing the full benefit of that upswing with no downside, so that’s fantastic.”

He also gave a “tip of the hat” to Papa for his on-the-mark prognostication that oil prices would move higher.

During the second quarter Centennial’s oil production was essentially flat from the first quarter at 31,270 b/d, as completions were weighted into June. Total oil and gas output climbed 6% sequentially to 57,525 boe/d, with total liquids production, including both oil and NGLs, increased to 76% from 70%.

Papa during the recent second quarter conference call said, “Given our bullish macro view we see no need to change our targeted organic growth trajectory toward 65,000 b/d in 2020.”

If the oil differential “basis just goes crazy” in the Permian, “we’re not going to just chase the volumes, regardless of what our basis netback,” he said. In that circumstance, the company could purchase volumes to meet its FT commitments.

“Within a few months we expect to be one of the few Permian mid-caps to have both oil and gas exit transportation for all their volumes locked down for the next several years,” he said.

However, some gas producers may face a real squeeze early 2019, Papa reiterated. “Indeed, likely beginning in early 2019, there’s going to be an issue where some gas in the Permian and likely first in the Delaware… has to be flared or the gas has to be shut in along with the corresponding oil.”

He has pointed to Apache Corp.’s rising gas volumes in the Alpine High, which is in the southern Delaware, as one of the main reasons for the surge.

Corresponding oil shut-ins could mitigate the gas shut-ins, he said. “But I would say there is a greater than 50% probability based on our assessment that there is going to be a gas takeaway problem that develops probably starting in the first quarter of 2019…

“We’ve been pursuing this gas FT for about six months, and I believe we’re likely one of the few mid-cap Permian plays that does have gas FT, and so that it is a discriminating factor for us,” Papa said.

“It hasn’t been talked about too much really, but I believe within four or five months the problem will be upon pretty much the whole Permian Basin.”

FERC Chairman Richard Glick has been outspoken in calling for more thorough reviews of natural gas projects under the Commission’s jurisdiction, particularly when it comes to greenhouse gas (GHG) emissions, but that doesn’t mean he’s against pipelines. The Democrat, promoted in January to chair the Federal Energy Regulatory Commission by the Biden administration, said during…