Denver-based Centennial Resource Development Inc., whose operations are focused on the Permian Basin, is sticking to its guidance of upping production by 10-15% this year. 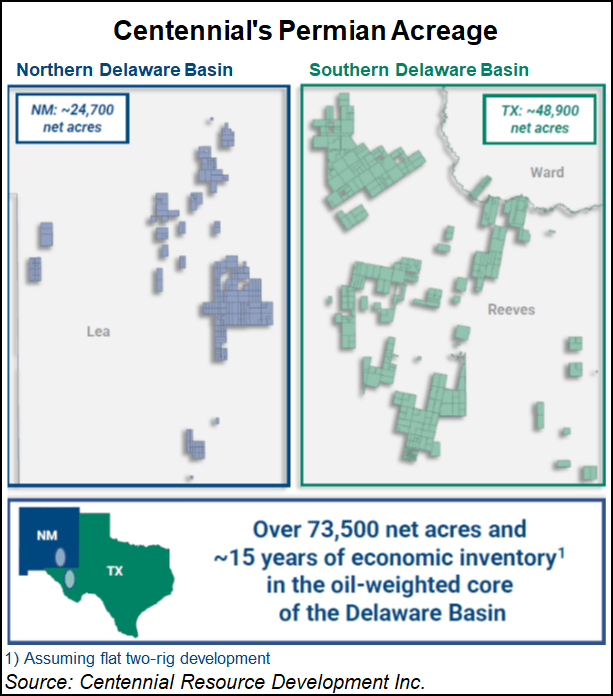 In an earnings call, CEO Sean Smith said the company was holding to its current two-rig program. “Should we want to add a third rig in the future because prices remain strong down the road, we could make that decision. I do think there is a fair amount of lead time that you would need to put in place. But again, I’ll reemphasize that our two-rig program to-date provides the growth that others may need to add a rig to accomplish,” he said.

The company’s operations cover 73,000 net acres in the oil-weighted core of the northern and southern Delaware Basin, a sub-basin of the prolific Permian Basin.

During the quarter, the company completed 18 wells through four separate developments, including two six-well developments.

The company is also raising its free cash flow target by $150 million, to greater than $550 million at the current strip, the CEO said. The company will use funds to commence a $350 million share repurchase program “in the near-term,” Smith said.

Despite a “challenging oilfield service environment,” Centennial has seen “no operational delays or cost overruns year-to-date. Going forward, we will continue our focus on developing larger well packages and driving further efficiencies in an effort to partially offset future cost inflation,” he said.

Total capital expenditures for the quarter were $114.7 million, of which $111.6 million went to drilling, completion and facilities costs.

“Building on the efficiencies gained last year, our operations team increased completed stages per day by 14% compared to the prior quarter. As a result, we completed six more wells than anticipated during the quarter while still delivering capex in-line with our expectations,” Smith said.

For the first quarter, Centennial reported net income of $15.8 million (6 cents/share) compared to a net loss of $34.6 million (12 cents) in the prior year period.