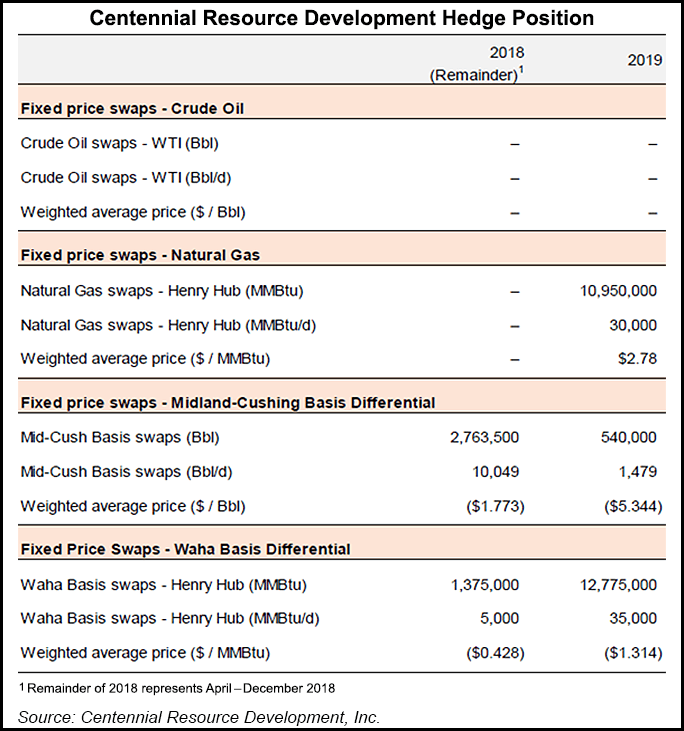 As he is known to do, Papa spent a few minutes throwing shade on production bulls who see U.S. unconventional output as unstoppable. He made some of the same claims in March at the annual CERAWeek by IHS Markit conference in Houston.

“The oil macro poster is developing as expected,” he said, and prices in turn have reacted as he expected. What that means for the U.S. oil supply response this year and beyond “will be less than currently predicted” by experts at the U.S. Energy Information Administration (EIA), International Energy Agency (IEA) and the Organization of the Petroleum Exporting Countries.

The IEA and EIA are forecasting total U.S. oil growth this year in the range of 1.3 million b/d to 1.4 million b/d.

Papa’s forecast for U.S. oil produciton growth this year is 950,000 b/d, “and my forecast for 2019 is lower than that. With that, in 2018 or 2019, we’ll see just a further constriction in global supply and demand, even if you exclude this Iranian sanction situation.”

Global issues aside, the onshore plays in the United States “are going to disappoint relative to the IEA and EIA estimates.” He thinks the Eagle Ford and Bakken shales “are a bit long” and parent-child well issues in the Permian are going to limit production.” In addition, pressure from institutional investors to put value over volumes will play a part in how producers react to stronger prices.

“I think all of those items are just going to kind of ensure that the total U.S. oil production is going to be a bit less than what people are currently predicting…One of the groupthink items that’s out there is short-cycle times. The concept is, you have strong oil prices that turn on the shale machine and the shale machine generates a vast amount of oil, which pushes oil prices down, i.e. short-cycle times.

“I believe that groupthink is 100% wrong, and the concept of short-cycle times is incorrect because even if capital gets poured into the shale machine, the shale machine will disappoint in terms of aggregate oil production growth…I think the industry and the world are going to have to conclude that the short-cycle time groupthink is an incorrect way of looking at the global supply demand over the next multiple years.”

WTI Hedging Off The Table

Centennial may employ some “tactical oil basis hedges from time to time,” but the company is unlikely to hedge West Texas Intermediate (WTI) anytime soon.

“Even at the current $70 WTI price level, I see a strong possibility of further strengthening in WTI over the next couple of years,” Papa said. “So we would intend to remain unhedged. Yes, there’s certainly a price when we would lay on some WTI hedges, but at this point you know I wouldn’t divulge what that price is. It would be a fluid situation, but what I can tell you is, that price is not $70.”

Regarding the futures curve, “with the severe backwardation, I would say it’s laughable. That would be the term for it. It’s ridiculous. That’s kind of my view of the macro…Our strategy is simply we would intend to be one of the fastest oil growth entities in the U.S. in what we believe will be a very strong WTI pricing environment over the next multiple years.”

Permian natural gas production represented only about 9% of the total revenue stream in 1Q2018, but there are some concerns about takeaway going forward.

The primary focus for gas “has been flow assurance, with the secondary objective of maximizing price realizations,” said CFO George Glyphis. “Given activity levels in the Permian and limited takeaway capacity out of the basin, we do expect natural gas pricing at Waha to continue to deteriorate from current levels,” he said.

Papa said midstream takeaway remains the biggest risk to growth in the Delaware sub-basin, where Centennial primarily plies its craft.

The concern centers around Apache Corp.’s gassy Alpine High development, which is moving a lot of supply to Waha. Apache’s Permian gas volumes climbed 57% year/year in the first quarter.

“I view it as there is a fairly high probability that in 2019 and 2020 there could be a pretty tense situation with gas exiting the Waha Hub from particularly the Southern Delaware Basin, and that’s why we would have a very high priority on securing firm transportation both to Waha and away from Waha,” Papa said.

Centennial has locked up some firm transportation commitments for casinghead natural gas both to and away from Waha for 2019 through 2021.

“With current Permian Basin residue gas production at approximately 7.5 Bcf/d, and effective takeaway capacity closer to 8-8.5 Bcf/d, we believe there is a significant risk that some operators will even need to flare their wet gas at the wellhead or curtail production at some point in the future,” said operations chief Sean Smith.

Centennial’s goal has been to ensure its Permian oil output would not be “curtailed or shut in due to potential gas constraints,” Smith said. Additionally, the company is operating under the assumption that the Railroad Commission of Texas “will not allow us or the industry to flare gas for an extended period when takeaway capacity is full.”

Most of Centennial’s wet gas is gathered and processed by EagleClaw Midstream Ventures LLC through an acreage dedication in Reeves County, TX. “Thus, we have secured capacity that gets our product to the plant tailgate,” Smith said. “The EagleClaw system, which is undergoing a new expansion, provides Centennial with ample processing capacity for the next several years.”

Centennial also has contracted capacity on El Paso Line 1600 and other pipelines connected to the EagleClaw plant to transport 100% of expected 2018 gross residue gas volumes from the tailgate of EagleClaw’s processing plants to the Waha Hub.

Management is confident that it can sell Centennial’s gas profitably this year once it’s moved to Waha, Smith said.

The company is in “final stage discussions with various midstream partners and firm capacity holders on export pipelines from the basin to provide these services…through 2021. We hope to have final contracts in place during the next few months, which we’ll discuss in more detail on our next quarterly call…While these contracts do come at a cost, we view them as buying insurance or flow assurance, so that we can achieve our 2020 oil production goal of 65,000 b/d of oil.”

For Permian crude, management is “very comfortable” with its takeaway arrangements. In early 2016 Centennial secured a crude gathering and transportation agreement with privately held Oryx Southern Delaware Oil Gathering and Transport LLC to build and operate a system to transport most Permian output to market.

The Oryx pipeline network is comprised of a 205,000 b/d gathering system, and it is completing its first phase of an expansion to about 425,000 b/d, set to be in service around mid-year and expanding to 600,000 b/d by late this year.

“We are a committed shipper on this gathering system, and we’ll have 85,000 b/d of firm capacity, which is more than adequate to support our 2020 oil target and beyond,” Smith said.
Crude not covered under basis hedges “will be exposed to Midland pricing, but we do not expect to truck or rail oil from our properties in Reeves County, which significantly cuts down transportation costs.”

The recent widening of the Permian oil basis “is somewhat transitory in nature and has been exacerbated by local refinery downtime and jittery markets.” Oil differentials should see “some relief around the second quarter of 2019, as additional pipeline capacity is put in place later that year,” Smith said.

“Our expectation is that new 2019 projects for oil takeaway capacity out of the basins will significantly improve the differential relative to what we are seeing today,” Glyphis said. “And while we view the current heightened Mid-Cush differentials a transitory issue, we’ll continue to evaluate options to reduce basis price risk.”

“While oil differentials are now a key point of focus for the sector, the first quarter benefited from a benign Midland differential of positive 34 cents/bbl,” Glyphis said.