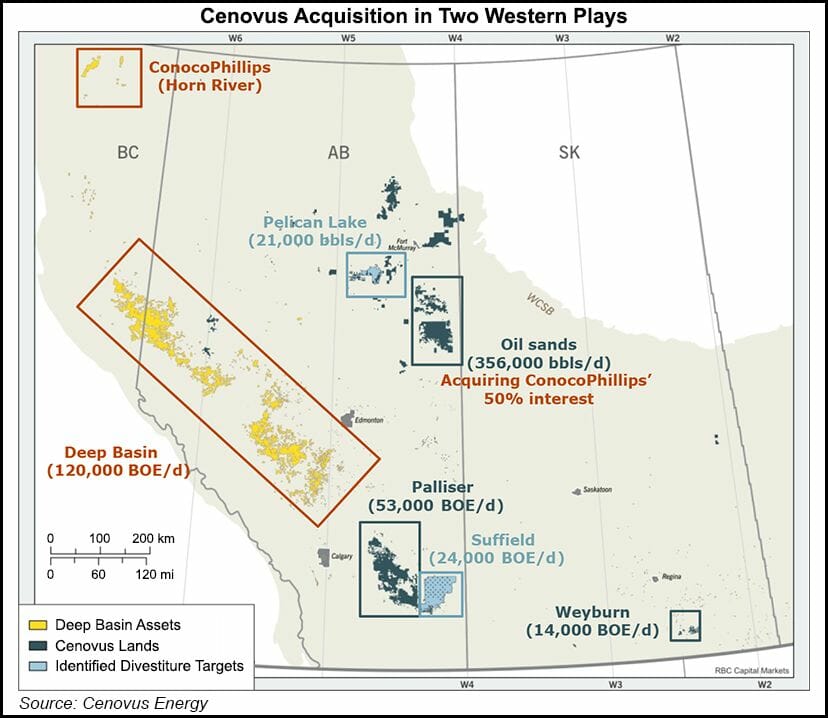 The acquisition announced late Wednesday would double production to 588,000 boe/d. Under terms of the deal, Houston-based ConocoPhillips is selling its half-stake in the Foster Creek Christina Lake oilsands partnership and most of its Western Canada Deep Basin gas assets, including within the Montney Shale.

“In a low oil-price environment, economies of scale are important,” Cenovus CEO Brian Ferguson said on a conference call. “This deal doubles the scale of the company and this will give us a greater competitive edge.”

Cenovus, which spun off of Encana Corp. in 2008, plans to fund the purchase in part by selling off conventional properties in AB’s Suffield and Pelican Lake regions. Once the transaction is completed, Cenovus plans to focus capital investments “on these two platforms that provide a decade of growth opportunities,” Ferguson said. “In addition, we expect to use this opportunity to rationalize and streamline our existing conventional assets.

“This is a transformational acquisition, and one that I’m confident will create substantial shareholder value for many years to come. It is immediately accretive to key per share metrics and enables significant cash generation capacity.”

Cenovus plans to spend C$170 million on the assets this year.

ConocoPhillips isn’t leaving Canada, nor the oilsands. It plans to retain a 50% interest in the Surmont oilsands joint venture and all of its operated Blueberry-Montney formation unconventional acreage.

“This is a significant, win-win opportunity for ConocoPhillips and Cenovus,” said ConocoPhillips CEO Ryan Lance The transaction allows the super independent to “rapidly reduce debt to $20 billion and double our share repurchase authorization to $6 billion. This means we will not only accelerate, but exceed, thethree-yearplanwe laid out in November 2016.”

During the analyst meeting last fall, ConocoPhillips announced it would sell up to $8 billion of its assets, primarily natural gas-rich North American properties, to pave the way for investments elsewhere, including in Texas and North Dakota.

“We will retain upside to future oil price increases through our equity stake in Cenovus and an uncapped, five-year contingent payment,” Lance said. “ConocoPhillips Canada will now focus exclusively on our Surmont oilsands and the liquids-rich Blueberry-Montney unconventional asset…This is truly a transformational event for both companies.”

The cash portion of the sale would be used to reduce debt to $20 billion this year while increasing the level and pace of share repurchases. ConocoPhillips’ board approved an increase in the existing share repurchase authorization to a total of $6 billion, double the previous $3 billion authorization. The company also intends to triple its planned buybacks through 2019 to $3 billion.

No changes are planned in 2017 capital spending plans, Lance said.

“We laid out a bold and unique value proposition in late 2016 that was focused on free cash flow generation, a strong balance sheet, returning cash to shareholders, disciplined growth and improved returns,” he said. “Our stated plan was to accelerate our value proposition by reducing debt with asset sales.

“Clearly, this transaction significantly accelerates those efforts and provides an important catalyst that should allow investors to have clarity and confidence in our future direction.” The agreement “clears the way for us to execute a plan that we believe will create long-term value and deliver double-digit returns to shareholders annually.”

The disposed assets had a net book value of $10.9 billion at the end of 2016. The transaction is subject to regulatory review and approval.

ConocoPhillips is following Marathon Oil Corp. and Royal Dutch Shell plc in trading some of Canada’s vast oilsands for assets elsewhere. In early March Marathon’s Canadian subsidiary sold its 20% stake in the Athabasca Oil Sands Project to a unit of Shell and Canadian Natural Resources Ltd. for $2.5 billion. Shell in turn sold nearly all of its undeveloped in-situ and oilsands holdings to Canadian Natural for $8.5 billion (C$11.1 billion). Meanwhile, ExxonMobil Corp. in February wrote down nearly of its entire 3.5 billion bbl of proved undeveloped reserves at the Kearl oilsands development in Western Canada.