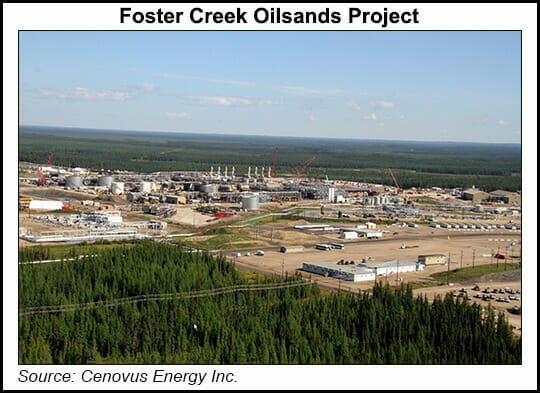 Natural gas output, enhanced by acquired international properties from Husky, grew 2.3-fold to 895 MMcf/d in the first three months of this year from 395 MMcf/d.

On the downstream side, combined Cenovus-Husky refineries in Canada and the United States processed 469,000 b/d in the first quarter. The Calgary firm “initially reduced refinery throughput in the quarter to align with market conditions and later increased throughput towards historical levels, as refined product demand continued to recover.”

President Derek Evans described the quarter as “strong from both a financial and operational perspective. We continue to benefit from both the strength in global oil market dynamics as well as structural improvement in heavy oil differentials.” A plant overhaul also “sets us up well for the balance of 2021.”

Delivered to the much larger refining and trading region on the Gulf of Mexico, the same crude fetched a quarterly average of $55.32, versus $40.43 during 1Q2020.