The operator of Sistrangas, Mexico’s main natural gas transmission network, has updated its five-year expansion plan for a third time, maintaining the core pipeline projects but also adding a series of other midstream projects. 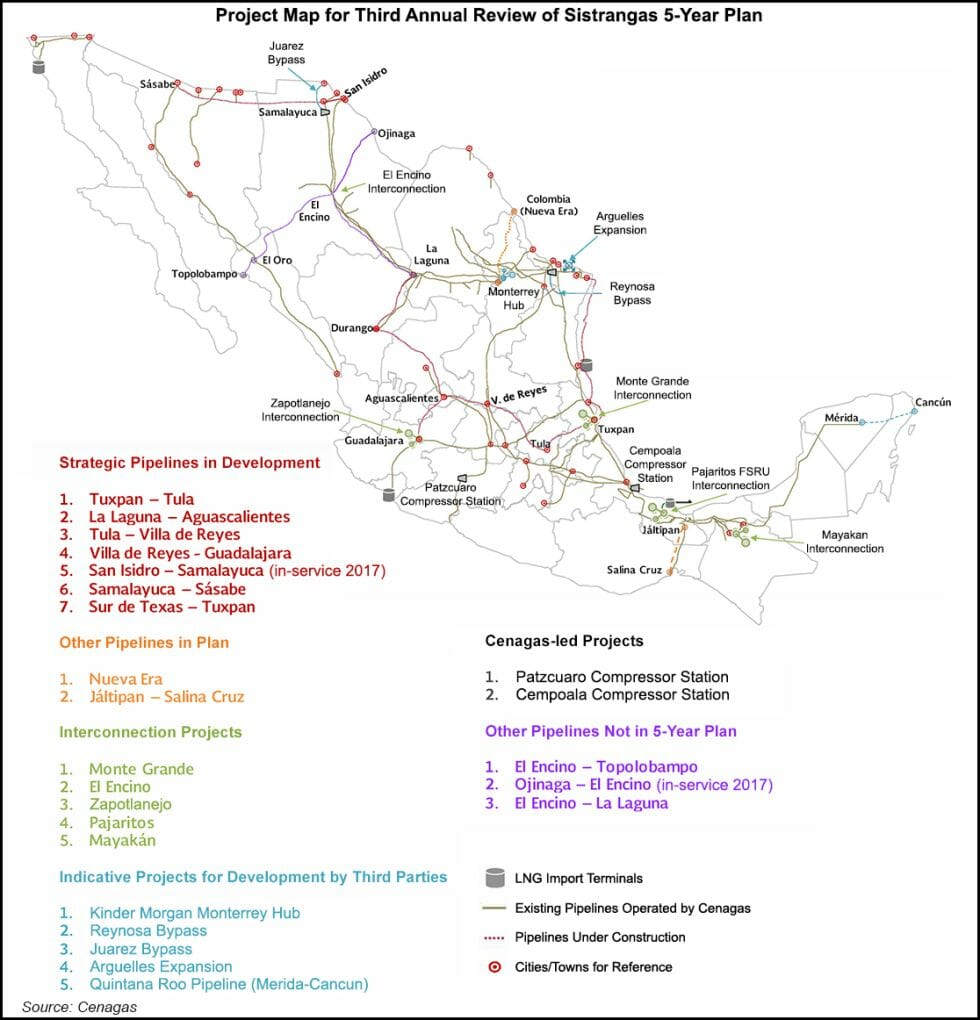 The state-owned Centro Nacional de Control del Gas Natural (Cenagas) is required to revise the 2015-2019 plan once a year. The energy regulator Comision Nacional de Energia (CRE) provides technical input for each revision, while the Energy Ministry (Sener) gives it the final nod.

The document outlines the major midstream infrastructure projects underway in Mexico’s natural gas sector. Most of the projects are developed by companies working independently or in coordination with Cenagas.

“For the third review of the five-year plan, Cenagas evaluated the technical feasibility of five interconnections as well as other projects that the market has shown interest in developing,” according to the plan. “Based on these results, Cenagas has put together a portfolio of interconnection, pipeline and storage projects.”

The plan’s centerpiece, since it was first released in 2014, has been a set of private pipelines that are being developed outside of the Sistrangas, as part of a historic buildout of Mexico’s gas transport infrastructure.

Most of these projects are not new themselves, but this update marks their debut in the 2015-2019 plan, a sign of Mexico’s gradual move toward a fully open and competitive gas market.

Since the last version of the plan was published, Cenagas held its first open season for capacity on Sistrangas pipelines, which led to launch of the market’s capacity reservation regime in July. Those contracts, with some 50 shippers for 97% of the system’s 6.3 Bcf/d operating capacity, are now up for renewal.

This year, Cenagas launched the electronic bulletin board (EBB) for the Sistrangas. Last month, Sener also published the final version of its storage policy, which charges Cenagas with developing strategic underground facilities to store a total of 45 Bcf for supply emergencies.

The revised expansion plan incorporates the first of these strategic storage projects, for at least at least 10 Bcf. Cenagas is to hold a tender for the project later this year. Mexico currently lacks underground storage capacity.

The five interconnection projects would connect private pipelines and a floating storage and regasification unit (FSRU) to the Sistrangas, allowing new sources of gas to flow into the national system.

All of the interconnections “will allow Sistrangas shippers to change injection points,” according to the plan. “Transport capacity released as a result of these changes would be posted to the electronic bulletin board, while any new capacity will be made available to the market through an open season.”

Three would connect the system to private pipelines under construction on the Gulf Coast, in the northwest and in central Mexico: Monte Grande’s 500 MMcf/d interconnect with the Sur de Texas-Tuxpan marine pipeline in Veracruz; Encino’s 70 MMcf/d link with El Encino-La Laguna in Chihuahua; and Zapotlanejo’s 200 MMcf/d interconnection with Villa Reyes-Guadalajara in Jalisco. The first two interconnections are expected to start up later this year, while the third has a startup date of October 2019. The privately owned pipelines are developing the projects.

The other two interconnection projects are related to efforts by Cenagas and other companies to ease gas shortages in the southeast, namely on Mayakan pipeline, which serves power consumers on the Yucatan Peninsula. That pipeline’s operator, a unit of France’s Engie SA, is developing a 350 MMcf/d interconnect to the Sistrangas.The other project is a 390 MMcf/d link to Petroleos Mexicano’s planned Pajaritos FSRU at Coatzacoalcos, Veracruz.

The efforts in the southeast also include the reconfiguration of the Cempoala compressor station in Veracruz. The project would reverse flows at the station and allow gas in central Mexico to move farther south after the Tuxpan marine pipeline comes in-service, expected by year’s end.

Cenagas is to hold a tender for the Cempoala project later this year and award an engineering contract by 2H2018, according to the plan.

The revised expansion plan also adds three projects to boost import capacity on the Sistrangas border pipelines. The seven import points connected directly to the system have a total capacity of 3.2 Bcf/d, or around 43% of the total 7.5 Bcf/d on Mexico’s cross-border pipelines.

Two of the expansions projects are in the northeast, where most U.S. pipeline shipments flow into Mexico. Mexico’s first gas trading hub, included in the five-year plan, is expected to emerge in this region near the city of Monterrey later this year or next.

Both expansions would allow Sistrangas to serve additional transportation demand in the area of Reynosa, Tamaulipas, which Cenagas detected through a shippers survey held last year.

One of the projects would add 150 MMcf/d on the Arguelles pipeline, operated by Energy Transfer Partners LP. The other entails building a 350 MMcf/d lateral line that would bypass densely populated urban areas in Reynosa to connect with the EstaciÃ³n 19 compressor station on the Sistrangas system.

A second “bypass” line is also planned in the northwest near Ciudad Juarez. Cenagas said a third-party has expressed interest in developing a cross-border pipeline from New Mexico to gas consumers in Chihuahua. The five-year plan does not name the pipeline.

The third revision maintains the seven “strategic” pipelines that formed the core of the original expansion plan. The Comision Federal de Electricidad (CFE), the federal power company, is the anchor client for all the pipelines. So far, only one of the strategic projects is operational. Sempra Energy subsidiary Infraestructura Energetica Nova (IEnova) last year put in service San Isidro-Samalayuca (1.22 Bcf/d), a 14-mile pipeline that connects with the Comanche Trail pipeline at the U.S. border in Chihuahua.

Several other CFE-anchored pipelines not included in the expansion plan have also started operating in the last year, including El Encino-Ojinaga and several segments of the Sonora system, both in northwest Mexico. Two others, El Encino-La Laguna and El Encino-Topolobampo, are expected to come online later this year.

The remaining strategic projects are under construction. They include the 497-mile Sur de Texas-Tuxpan (2.6 Bcf/d), being developed by a TransCanada Corp. and IEnova partnership, and the 183-mile Villa de Reyes-Guadalajara (886 MMcf/d), of Mexico City-based Fermaca.

Most of the strategic projects are expected to finish construction by the end of this year or in early 2019, although several face delays related to social and environmental conflicts. The Nueva Era pipeline (504 MMcf/d), independently developed by Howard Energy Partners and Grupo Clisa, is also expected to come in-service by October to serve power consumers in Monterrey.

The third revision has dropped or postponed two other pipelines: a proposed line between the port of Lazaro Cardenas in Michoacan state and Acapulco in Guerrero, and the Jaltipan-Salina Cruz pipeline for Oaxaca state in southern Mexico.

With the Lazaro Cardenas-Acapulco, Cenagas identified an an alternative route from Lazaro Cardenas to La Union, also in Guerrero, that has more potential demand for transport capacity. The operator first plans to develop a compressor station at Patzcuaro to boost transport capacity on Sistrangas to serve industrial demand at the port and then hold an open season for the new Lazaro Cardenas-La Union route. Cenagas is conducting prefeasibility and basic engineering studies for the Patzcuaro station.

Cenagas put the Jaltipan-Salina Cruz pipeline on hold after it determined that the existing Sistrangas pipelines could serve demand in Oaxaca. However, the operator plans an open season for Jaltipan-Salina Cruz later this year before deciding whether to drop it definitively from the expansion plan.

Finally, the five-year plan may eventually incorporate a proposed extension of the Mayakan pipeline, from Merida to Cancun, to supply consumers in the state of Quintana Roo. Engie is developing the project.

Awaiting a catalyst to break natural gas futures out of their recent range, traders looked ahead to the latest round of government storage data early Thursday as prices pulled back slightly. The June Nymex contract was down 2.1 cents to $2.948/MMBtu at around 8:50 a.m. ET. Prediction for this week’s Energy Information Administration (EIA) storage…