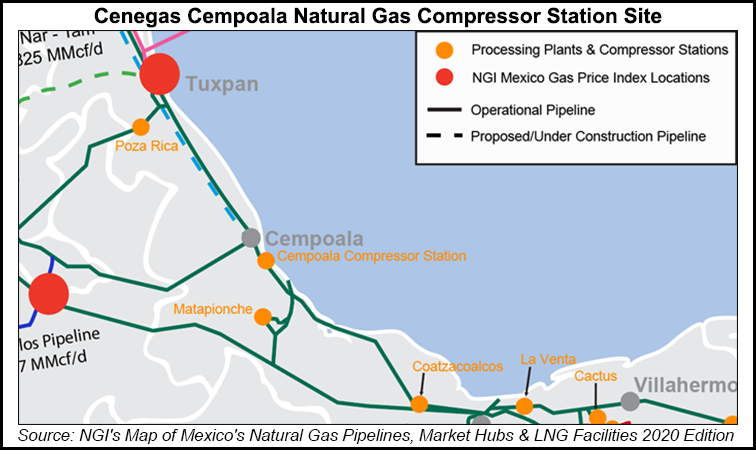 The second phase of the reconfiguration of the Cempoala compressor station in Veracruz state will be complete in October, according to the general director of Mexico’s Centro Nacional de Control del Gas Natural (Cenagas), Elvira Daniel Kabbaz.

Speaking virtually last week at the Mexico Gas Summit hosted by Industry Exchange LLC, Daniel said that work at Cempoala was 97% complete and that the reconfiguration would allow 350 MMcf/d-1.4 Bcf/d of natural gas to be pumped, “not only to the south but also to the center of the country.”

The Cempoala project would enable supply from the 2.6 Bcf/d Sur de Texas-Tuxpan marine pipeline to flow to the region.

As part of its five-year plan, Cenagas plans to expand the Montegrande injection point at Tuxpan by 400 MMcf/d to hit 900 MMcf/d, allowing for more U.S. natural gas to reach Mexican markets, Daniel said.

Daniel added that the Cuxtal I interconnection between the isolated Mayakan pipeline in the Yucatan and the national Sistrangas system was “on the verge” of being complete.

Combined, the projects are key elements of what Cenagas is calling the Leona Victoria natural gas hub in the southeast of Mexico, which would allow for a mix of “national production and gas from the north” to provide flexibility and security of supply to the area. Daniel added that gas from this hub also would be directed to the Dos Bocas refinery in Tabasco when it is complete.

The Cenagas five-year plan includes the creation of three other similar hubs in Mexico: Las Adelitas in Reynosa; Dulces Nombres in Monterrey and Francisco Madero in La Laguna.

Daniel said Mexico has a “great opportunity” to import natural gas because the United States “has the most competitively-priced gas in the world,” with cross-border capacity currently double Mexico national demand.

With the backing of the newly signed United States-Mexico-Canada-Agreement, Mexico can attract national and international industries “and offer them energy at very competitive prices,” Daniel said.

Much of Daniel’s presentation revolved around the prospect of integrating the Sistrangas with the numerous private pipelines anchored by state utility Comisión Federal de Electricidad (CFE).

“We would like to count on one national system for natural gas transport,” she said, with one manager “overseeing all the transport systems in the country.”

Cenagas has already met with eight pipeline transport companies to discuss integration, and they are working on designing clear rules so all parties are pleased, Daniel said.

The integration proposal is included in the Cenagas five-year plan, which requires approval from the Energy Ministry. Daniel said she expects this by the end of the year.

Finally, Daniel said Cenagas has not yet nailed down the timeline for its next open season, but is working on a calendar that would be sent to regulators for approval. Cenagas has an estimated 200-350 MMcf/d of transport capacity that could be made available in the next two months, but not through an open season.