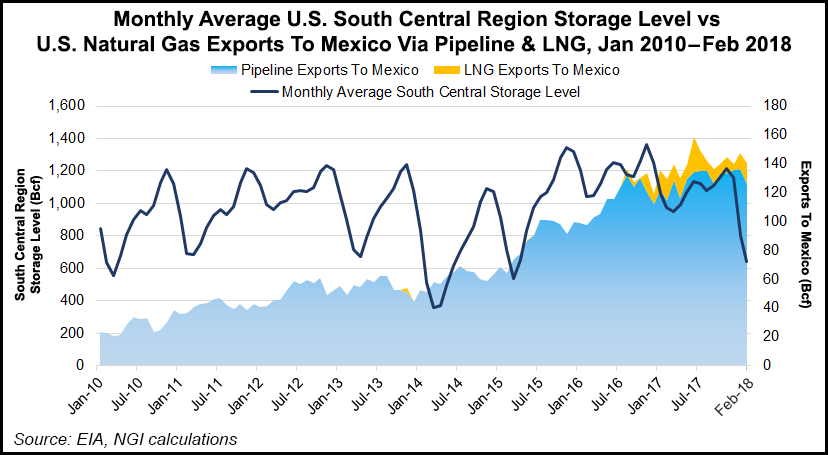 The reservoirs are to undergo a nomination process, incorporating private sector feedback, to choose one for the tender later this year, in which Cenagas must contract at least 10 Bcf of strategic storage capacity.

Cenagas, the state-owned operator of Sistrangas, Mexico’s main natural gas transmission network, is required to develop 45 Bcf of strategic storage capacity by 2026, according to a policy document released by the Energy Ministry (Sener) earlier this year.

Cenagas has opened a data room through June for the four reservoirs to provide seismic information, details on adjacent gas transport infrastructure and georeferenced layers for each site, among other information.

Once the data room is closed, Cenagas plans to hold the nomination process. Companies may submit nonbinding proposals that provide technical, economic, legal and social reasons for developing one of the four possible storage sites.

After the nomination period ends in August, Cenagas plans to use private sector feedback to help select a site for the first tender. The operator would then prepare bidding documents, a process that is to incorporate a 10-day public comment period and input from energy regulators.

The tender is expected to kick off by September and should take up to six months, according to Cenagas.

The Sener storage policy also mandates that Cenagas organize an open season to identify demand for commercial storage capacity, which could then be incorporated into the bidding process. The eventual tender winner may also hold an open season for additional commercial capacity.

Officials are betting on the strategic inventories to pave the way for a commercial gas storage market to emerge in Mexico.

Cenagas selected the four depleted reservoirs — Brasil, Acuyo, Jaf and Saramako — with help from the upstream oil and gas regulator, the Comision Nacional de Hidrocarburos (CNH). The reservoirs all come from a list of 15 candidate sites identified through a geological survey completed last year.

The 45 Bcf of working gas in the Sener storage mandate, equivalent to five days of demand in 2029, would be used only during supply emergencies. The strategic inventories are expected to provide national coverage, on both the 6,345-mile Sistrangas and the major private pipeline systems being developed outside of the Cenagas-operated network.

The candidates for the first tender appear to be concentrated in the eastern half of Mexico, running north to south, mostly in Gulf Coast states.

The northernmost Brasil reservoir is in the state of Tamaulipas in the Burgos Basin, Mexico’s leading producer of non-associated gas. More than half of U.S.-to-Mexico gas exports flow through this region. The site is also the closest of the four to the U.S. South-Central storage region, which has a combined designed capacity of 1,558 Bcf working gas.

The Brasil reservoir also appears to be at the same site of a proposed storage project from the mid-2000s that never came to fruition. The site has an original volume of 418 Bcf, according to an earlier draft of the Sener storage policy.

Pipeline imports from the United States do not yet reach the southeast. However, the expected start-up in December of the 2.6 Bcf/d Sur de Texas-Tuxpan marine pipeline, which terminates in Veracruz, should ease the supply constraints farther south.

While the first tender only involves depleted reservoirs, Cenagas may incorporate other underground storage technologies, such as salt domes, in subsequent auctions to reach the 45 Bcf target. These later tenders would be held between 2019 and 2024, according to a timeline in the Sener policy document.

The cost of building the strategic capacity is to be “socialized” through a tariff mechanism applied to all shippers moving gas on the Sistrangas and the private pipelines. Regulators have yet to release any details on how that mechanism will work.