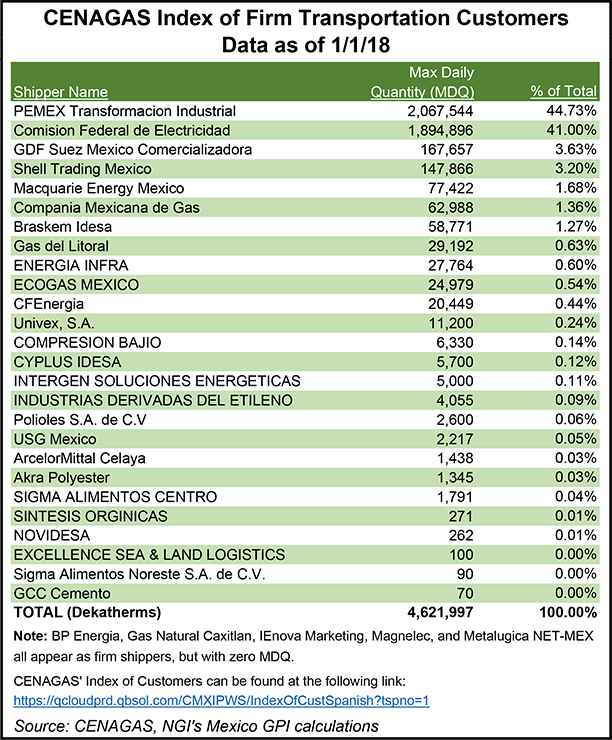 Daniel, an appointee of President AndrÃ©s Manuel LÃ³pez Obrador, told Radio UNAM that the 2013 market-liberalizing energy reform passed under the previous government “did not improve our lives,” and that natural gas transport contracts for seven delayed pipelines tendered by CFE are unfair to the company.

Under the contracts’ force-majeure clauses, CFE must make fixed-capacity payments to the developers for the pipelines, despite the fact that they are not yet in service. For this reason, LÃ³pez Obrador has repeatedly called for the contracts to be renegotiated.

Created in 2014 under the auspices of the energy reform, Cenagas operates and allocates capacity on Mexico’s Sistrangas natural gas pipeline grid, a collection of pipeline systems formerly operated by Pemex. The CRE, meanwhile, oversees permitting and regulations in the midstream natural gas segment, and is roughly analogous to the U.S. Federal Energy Regulatory Commission.

The seven pipelines, whose owners include TC Energy Corporation, Infraestructura EnergÃ©tica Nova (IEnova) and Grupo Carso, must be integrated into the Sistrangas, Daniel said in the interview, explaining that Cenagas aims to become the sole technical operator of all natural gas pipelines in Mexico.

The seven pipelines have faced delays due to issues including local opposition, lawsuits, vandalism, unfavorable weather, and a protracted indigenous consultation process.

The integration of the pipelines into the Sistrangas cannot occur until the contracts with the developers are renegotiated, a process that CFE general director Manuel Bartlett is currently undertaking.

Daniel said she is “sure” that Bartlett will successfully renegotiate the contract terms, and that once this has occurred, Cenagas will conduct an open season for the pipelines’ capacity, giving priority first to CFE, and then to industrial consumers.

“We cannot allow private companies to be defining in a parallel system where natural gas will be sent,” Daniel said.

She clarified, however, that Cenagas “in no way” wishes to harm the interests of private sector companies, adding that “our job is to guarantee … that the country has conditions for growth, and that is what we are doing.”

Thalya Berrones, midstream and downstream consultant for Talanza Energy Consulting, told NGI’s Mexico GPI recently that since the integration of the CFE-anchored pipelines cannot occur without the developers’ consent, the government will have to seek economic incentives for the developers, namely in terms of the zonal transport rates that they will collect.

“Both Cenagas and the [developers] should begin with discussions between their [respective] boards to see if there are sufficient incentives in terms of rates,” Berrones said, citing that Cenagas sets transport rates for nine zones in Mexico, and that new zones would have to be established.

Daniel also suggested that private sector natural gas marketers in the country may be committing pricing “abuses,” and that more transparency is needed with regard to the prices they are charging to end-users.

Although the CRE publishes the IPGN monthly natural gas price index based on information provided by marketers, the CRE does not disclose which marketers are charging which prices.

Daniel called for the publishing of a “who’s who” of natural gas marketers and local distribution companies to determine which ones are charging excessively high prices. LÃ³pez Obrador took exactly such a measure last month in the gasoline retail segment to expose which stations, in his view, were gouging motorists at the pump.

Daniel said she believes that the new CRE commissioners controversially installed by LÃ³pez Obrador “understand that the CRE’s intervention is needed here” with regard to disclosing the prices charged by marketers.

The CRE “is not autonomous, this is a false perception that even several commissioners have had,” she said, adding that the CRE “is an auxiliary organism of the federal executive branch.”

Although article three of Mexico’s 2014 coordinated energy regulators law states that the CRE has “technical, operating and management autonomy,” this provision “does not mean autonomy,” Daniel said.

LÃ³pez Obrador has repeatedly accused the CRE and upstream hydrocarbons regulator ComisiÃ³n Nacional de Hidrocarburos (CNH) of promoting the interests of the private sector to the detriment of Pemex and CFE.