The operator of Sistrangas, Mexico’s main gas transmission network, has tendered a $38 million contract for a compressor station project intended to help shore up the supply of natural gas in southern Mexico. 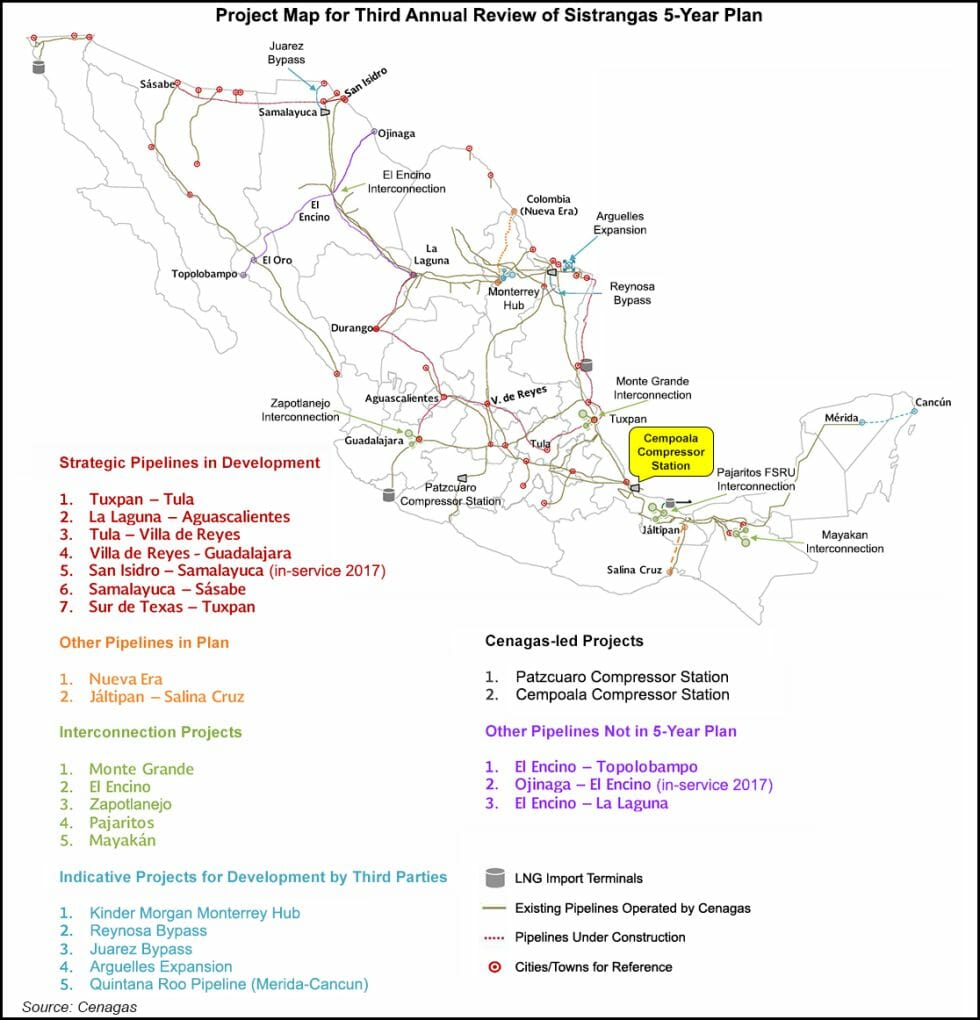 The Centro de Control del Gas Natural (Cenagas) on Tuesday awarded an engineering contract to a consortium of Mexican firms for the reconfiguration of the Cempoala compressor station, located in Veracruz state on the 48-inch Cactus-Reynosa section of the Sistrangas pipeline system.

The consortium comprises Taylor Servicios Tecnicos SA de CV, an engineering firm based in Tabasco, and MAJA Consulting Group SA de CV, headquartered in Veracruz. The winning bid was for 727 million pesos, or $38.2 million at current exchange rates. Cenagas expects to sign the contract within 15 days of the award date.

Four other companies bid on the tender, which was launched earlier this year. Three offers were disqualified for failing to meet technical requirements.

The contract entails procuring, installing and putting into service two turbo-compressors and a regulation system at Cempoala, as well as upgrading the station’s existing equipment and infrastructure. The project would begin in September and carry on into the next year, wrapping up by the end of November 2019, according to a presentation by Cenagas earlier this year.

Once completed, the reconfiguration would allow the 1.4 Bcf/d compressor station to move gas south through central Mexico and toward the southeast, in the reverse direction of the current flow on that section of the Sistrangas.

The Cempoala project would take advantage of an expected influx of imported gas into central Mexico. Supply from the Sur de Texas-Tuxpan marine pipeline, due online later this year, would displace gas currently flowing south-north on the Sistrangas pipelines in that area and thus ease the deficit in the south.

The 2.6 Bcf/d subsea pipeline extends from the maritime border with the United States in South Texas and terminates at the port of Tuxpan in Veracruz, where its sponsor is building a 500 MMcf/d interconnection with the Sistrangas. The project is a joint venture between TransCanada Corp. and Sempra Energy’s Mexico unit and is anchored by a transportation service agreement with Mexican power utility Comision Federal de Electricidad (CFE).

The Cempoala reconfiguration is one of several projects intended to improve the gas supply in the southeast. These include a tender launched in July by Pemex marketing subsidiary Mex Gas Supply SL for a floating storage and regasification unit (FSRU) at the port of Pajaritos in Veracruz. A total of 12 companies have expressed interest in the FSRU tender, according to press reports this week.

In the Yucatan region, the Mayakan pipeline is also developing an interconnection with Sistrangas near the Cactus gas processing facility in Chiapas. The project would provide a new source of gas for the isolated pipeline, which is the main gas transport system on the peninsula, mainly serving five power plants with a combined capacity of 1,578 MW.

The interconnection entails the construction of a 10-mile, 30-inch pipeline with a transport capacity of 350 MMcf/d, according to a presentation by France’s Engie SA, the operator of Mayakan.

Engie also plans to increase pressure on Mayakan and build a new compressor station near Merida in order to boost transport capacity. The company has proposed holding an open season this year for shippers to reserve additional capacity on the pipeline, according to the presentation.

Engie has also discussed plans for a 99-mile extension of the Mayakan pipeline into Quintana Roo, which does not have access to natural gas. That project is estimated to cost $300 million.

The interconnection work on Mayakan is expected to cost $49 million, according to a June release by the Mexican Energy Ministry (Sener).