Following positive results from a pilot program based in the Permian Basin to produce gold hydrogen using would-be abandoned oil and gas reservoirs, Cemvita Factory Inc. said it has formed and closed funding for a new subsidiary in preparation to commercialize with its founding investors. 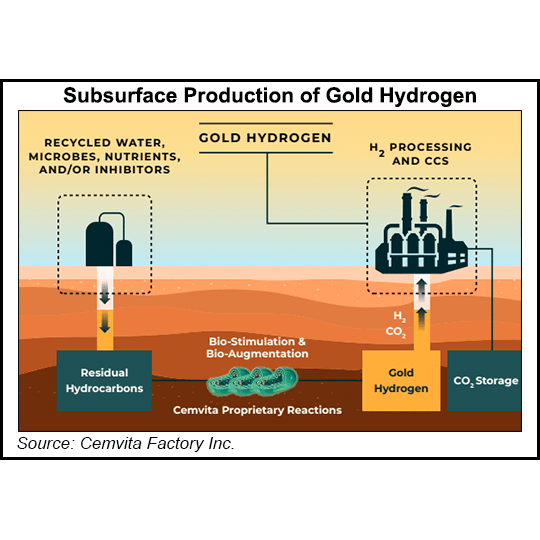 “In a very short time frame, we moved our microbes from the lab to the field,” said Cemvita’s director of the new subsidiary, Gold H2 LLC (GH2), Zach Broussard. “The hydrogen production in this trial exceeded our expectations.”

With founding investors Chart Industries Inc. and 8090 Industries, Cemvita’s subsidiary is set to “continue to use hydrogen producing microbes downhole” and could “achieve rates that will translate to hydrogen production at $1/kilogram (kg) or less,” Broussard said.

“The commercialization and economics of the hydrogen economy will require technologies that produce the hydrogen molecule at a meaningful scale with no carbon emissions,” said Chart CEO Jill Evanko.

Producing green hydrogen with electrolysis powered by renewable sources is carbon neutral, it can be “energy intensive and expensive,” noted Cemvita executives. Gold hydrogen, also carbon neutral, is biologically produced using microbes leftover in depleted oil reservoirs that would have otherwise been plugged and abandoned.

“We’ve long held a firm belief in the role biology can play in the energy industry,” said 8090 cofounder Rayyan Islam. “We have incredible conviction in next-generation, clean hydrogen production methods that leverage the vast and sprawling existing infrastructure and know-how of the oil and gas industry. It turns out, this approach leads to the lowest possible cost of hydrogen production today and the largest players in the energy and industrial sector have taken serious notice.”

During lab testing, Cemvita scientists raised microbe performance more than six-fold the rate needed to produce hydrogen at $1/kg, according to the company. A spokesperson for Cemvita confirmed with NGI the firm could potentially market gold hydrogen for less than $1/kg in the future.