Physical gas for Friday delivery was a mixed market on Thursday with a few modestly higher quotes in the Gulf Coast mostly outweighed by broader declines in the Northeast, Mid-Atlantic, Great Lakes and Midcontinent. 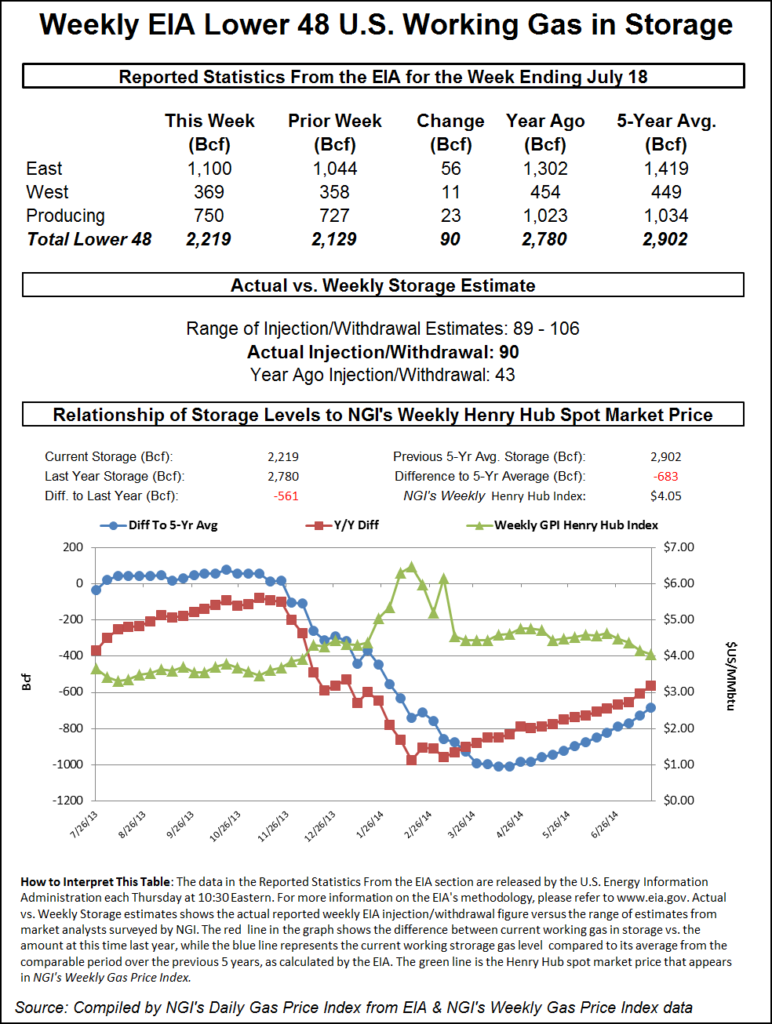 The market on average was unchanged. Normally, traders will make certain their deals are completed before the release of the market-moving Energy Information Administration (EIA) storage report on Thursdays at 10:30 a.m. EDT. The reported injection of 90 Bcf was somewhat shy of market expectations by about 4 Bcf, and futures staged a healthy advance. At the close, futures had broken a five-session losing streak and August was up by 8.5 cents to $3.847 and September had gained 7.4 cents to $3.850. September crude oil fell $1.05 to $102.07/bbl.

Next-day gas prices at Midwest and Great Lakes delivery points fell as weather forecasters predicted more cool air through the end of the month. AccuWeather.com meteorologists said, “After temperatures briefly climb to typical midsummer levels, cool air will roll into the Midwest and expand to the East for the last part of July. Later this week into the end of July, the air forecast to settle in from the Midwest to the East Coast will not be as cool as that of last week.

“Unlike the air that broke off from the arctic and plunged southward, much of the cool air will form in place during the last week of July,” said AccuWeather.com meteorologist Paul Pastelok, “We are not looking at very many, if any, record lows being set, but for those who don’t like 90-degree heat and high humidity this will be another nice air mass.”

The modest temperatures so far this summer have impacted energy usage, and “for example, from July 1 to July 21, Chicagoans have used 35% less energy than the 30-year average to cool their homes and businesses. In Atlanta, that savings has been around 12%. The waves of cool air have been due to the jet stream taking up a position unusually far to the south over the central and eastern part of the nation for July. Usually the jet stream takes up residence along or just north of the United States/Canada border, [but this]July will wind up averaging about 4 degrees below normal over the Upper Midwest, including around Minneapolis, Chicago and Detroit,” Pastelok said.

AccuWeather.com predicted that temperatures Friday would have a hard time budging from seasonal norms. Thursday’s high in Minneapolis of 84 degrees was expected to hold Friday before reaching 88 on Saturday. The normal late-July high in Minneapolis is 83. Chicago’s Thursday high of 71 was seen rising to 76 Friday before jumping to 84 on Saturday. The seasonal high in Chicago is 84. St. Louis’ 83 maximum Thursday was expected to rise to 86 Friday but surge to 96 Saturday. The normal high in St. Louis is 89.

A Great Lakes marketer said, “We are buying as much gas as we can at the moment, and we have customers who want to lock up current prices going forward,” said a Michigan trader. “We have one customer who did an August through next June contract to coincide with the end of their fiscal year.”

Prices in the Northeast and Mid-Atlantic suffered somewhat heavier losses. Deliveries to the Algonquin Citygates shed 10 cents to $2.80, and at Iroquois Waddington next-day gas was seen at $3.90, down a penny. On Tennessee Zone 6 200 L, prompt gas fell 4 cents to $2.91.

Producing zone quotes were weaker as well. Gas at the NGPL Midcontinent pool fell a penny to $3.72, and deliveries to OGT shed 3 cents to $3.62. On Panhandle Eastern, Friday gas was quoted at $3.73, unchanged, and on NGPL TX OK, next-day packages were seen at $3.74 down 2 cents.

Bears still remain in the driver’s seat, but some had been wondering if a repeat performance of last Thursday’s 16-cent dive might be in the cards following the morning release of storage data. A week ago, August futures plunged below $4 following the release of storage data, well above market expectations. The reported storage build came in at 107 Bcf when most observers were expecting a figure closer to 100 Bcf.

For the bears it was not to be even though recent cool weather in eastern and Midwest markets had analysts looking for a build just about double the normal patterns for this time of year. Last year, 43 Bcf was injected, and the five-year average stands at 46 Bcf. Analysts at United ICAP expected an increase of 90 Bcf, and Kyle Cooper at IAF Advisors calculated a 93 Bcf build. A Reuters poll of 23 industry cognoscenti revealed an average 96 Bcf with a range of 89-106 Bcf.

Bentek Energy calculated a 91 Bcf increase and said, “Mild temperatures across the middle of the Lower 48 allowed for a continuation of strong storage injections from the previous week, especially in Bentek’s sample of East Region fields, which posted a total sample injection above 38 Bcf on the week. Facilities in the Producing and West regions decreased their injections within Bentek’s sample by a combined 6 Bcf as an uptick in power demand in the West Region by 0.5 Bcf/d cut into storage activity and prompted an increase in net flows from the Producing Region to the West. The increased net flows helped reduce total injections below triple digits on the week.”

Bentek nearly scored a direct hit. The actual figure came in at 90 Bcf, and the ensuing rally had traders thinking the momentum might extend at least into Friday. “I think the market will try to build a base for a little while. If traders can do that and take it into [Friday] with a higher close in the $3.81 to $3.83 area maybe they [traders] will try to work the market a little more and take some profits into the weekend,” said a New York floor trader.

Analysts saw a bullish bias to the figures. “The 90 Bcf build was bullish relative to the 96-Bcf consensus expectation and well below our own model’s 104 Bcf estimate, said Tim Evans of Citi Futures Perspective. “It was clearly a bullish surprise. At the same time, we note we’ve seen some volatility over the past two weeks, with the larger than expected 107 Bcf build in the prior week and the smaller than expected 90 Bcf figure in the latest report, making it hard to be too confident regarding just where the supply/demand balance is. It’s also worth bearing in mind that while it was a bullish surprise, the 90 Bcf build was still well above the 47 Bcf five-year average, and the larger bearish storage trend remains intact.”

Phillip Golden at Energy Market Exchange in Houston said, “We will still need injection numbers of 80 Bcf/week to refill storage to the levels expected by the Energy Information Administration, and to get to the high of 2012, we would need to average 113 Bcf/week. [Thursday’s] number increases the likelihood that we will reach the EIA projected number of just over 3,400 Bcf by the end of injection season. However, with the teeth of summer and the hurricane season still ahead, cautious optimism is the watchword.”

The hits just keep coming in regards to incursions of cool weather. Joe Bastardi of WeatherBELL Analytics said to look for another “major cool shot next week, rivaling other major cool shots (against deviations from normal) of the season.” He added that the “ECMWF (European) Operational [is] predicting another freakish two- to three-day cool period in southern Plains [and] Mean trough backs west/south after that.” Bastardi said there was “Excellent agreement with the JMA [Japan Meteorological Association]/ECMWF.”