Natural gas futures on Wednesday soared past $9.000/MMBtu for the first time since 2008 amid worries that fragile supplies may prove inadequate to meet summer cooling demand and robust calls for U.S. exports. 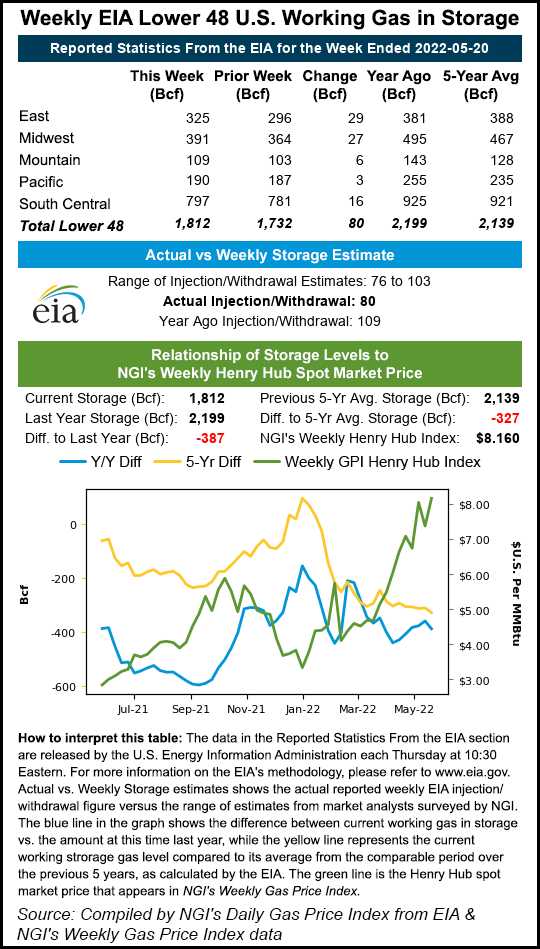 Traders through most of the year also have bought aggressively ahead of the prompt month’s final settlement, preferring to bet on bullish momentum given the supply/demand imbalance concerns. At its intraday peak Wednesday, the front month hit $9.399.

The June Nymex gas futures contract, a day before rolling off the books, later gave back some of the gains in afternoon trading but still advanced 17.5 cents day/day and settled at $8.971. July jumped 15.7 cents to $8.993.

After mounting a rally one day earlier, NGI’s Spot Gas National Avg. packed on a 48.5-cent gain to $8.900 on Wednesday.

U.S. liquefied natural gas (LNG) export volume, uneven in recent weeks because of maintenance projects, gathered momentum this week and hit a two-month high on Wednesday above 13 Bcf. That put exports near the 14 Bcf-plus record level reached earlier this year amid robust demand from Europe.

Europe escalated calls for U.S. exports of the super-chilled fuel to supplant Russian supplies. Countries across the continent are clamoring for American LNG as part of an ongoing effort to dramatically reduce reliance on Russian gas ahead of next winter.

Now, Rystad Energy analyst Lu Ming Pang noted, Asian demand for U.S. LNG is on the rise as China and other major countries in the region brace for the summer cooling season. This could draw LNG away from Europe and toward Asia in coming weeks, elevating competition for U.S. supplies.

“All factors remaining constant,” Pang said, “we may see a rebalance of LNG vessels.”

Forecasts call for above-average domestic heat this summer, further fueling elevated demand expectations. At the same time, amid maintenance work, U.S. production is relatively anemic. It has held around or below 95 Bcf/d this spring – at times as low as 92 Bcf – far from the 97 Bcf peak of the past winter.

All of this has pressured U.S. supplies and undergirded a market that could finish the current injection season light on gas in storage for next winter, Bespoke Weather Services said.

Utilities injected 89 Bcf of gas into storage for the week ended May 13, the U.S. Energy Information Administration (EIA) said in its latest assessment. The increase lifted stocks to 1,732 Bcf. Still, storage levels were well below the year-earlier total of 2,090 Bcf and the five-year average of 2,042 Bcf.

EIA is slated to post its print for the week ended May 20 on Thursday. Analysts anticipate a relatively modest injection, which would leave supplies at a seasonally steep deficit to averages.

Bloomberg’s poll spanned estimates of 77 Bcf to 103 Bcf, landing at a median expectation for an injection of 91 Bcf.

“While making new highs was our target for this week, we could still see further rallying into the expiration of the June contract,” Bespoke said. The firm said storage data reflect supply/demand balances “that are way too tight for any degree of comfort.”

Production “remains off highs, while LNG volumes climbed back over 13 Bcf,” Bespoke added. “Power burns remain solid…The main theme has been, and remains, that we simply must see significant, and sustainable, gains in production to ensure we reach a comfortable storage level this fall.”

With “underlying supply and demand conditions very similar to those observed in 2021, the summer of 2022 is likely to see sustained pricing pressure,” he said. It “is probable that the Western U.S. will once again exit the summer with low gas storage inventories, setting the stage for upward price pressure” throughout the region ahead of the next winter.

Elsewhere, particularly in northern markets, cooling demand eased along with temperatures after unseasonably hot weather and strong gas consumption earlier in May.

National Weather Service (NWS) data showed below-average highs and chilly rains tracking through the central United States this week. Highs on Wednesday ranged from the 50s to the 70s in the upper Plains, Midwest and Great Lakes regions. The mild conditions also pushed into the Northeast.

However, by the weekend, NWS forecasts showed temperatures were projected to climb back into the 80s from the Northern Plains to New England, while much of the South could see highs in the 90s, resuming upward pressure on demand.