Natural gas for delivery Friday on average added 7 cents in Thursday’s trading. A handful of points in the East and Northeast lost ground, but otherwise gains anywhere from a nickel to a dime were widespread. 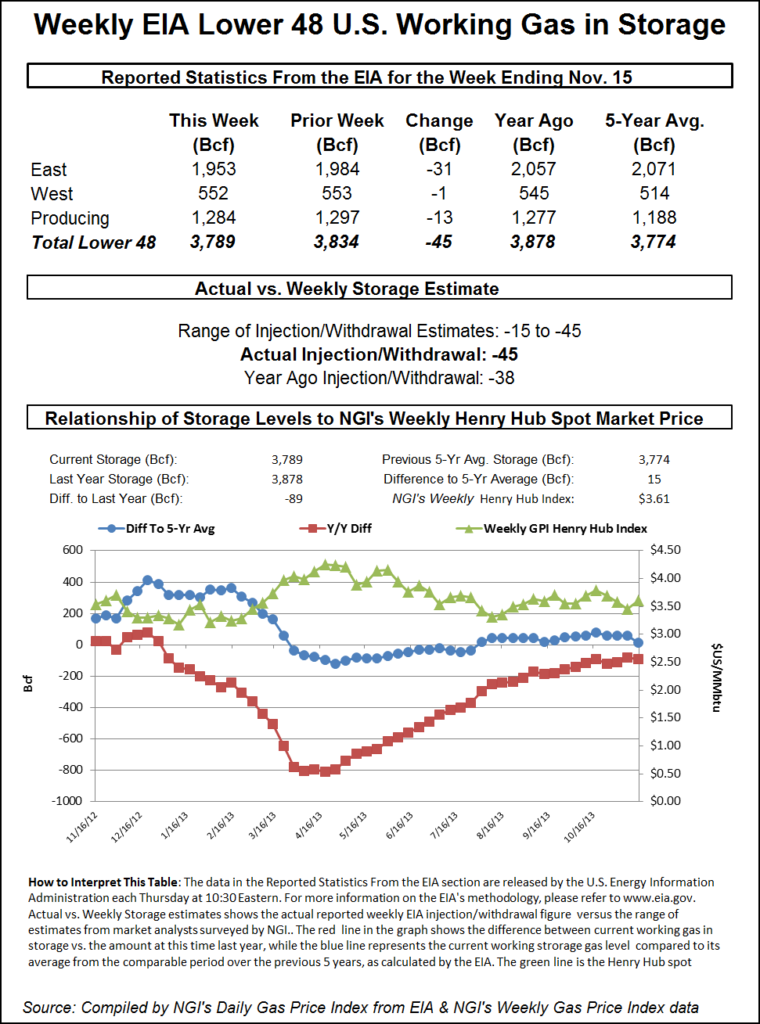 Weather forecasts called for an incursion of cold air from Canada to reach the Ohio Valley by late Friday, and next-day gas in the path of the cold rose accordingly. The Energy Information Administration reported the first withdrawal of the heating season, and prices rose modestly. At the close, December had risen 2.8 cents to $3.702 and January was higher by 2.7 cents to $3.740. January crude oil gained $1.59 to $95.44/bbl.

Temperatures throughout the Great Lakes were forecast to spend most of their time going into the weekend at below normal levels. Wunderground.com predicted that the high in Milwaukee of 46 degrees Thursday would drop to 39 Friday and 32 on Saturday. Milwaukee’s normal high this time of year is 43. Chicago’s 53 high on Thursday was expected to slide to 43 Friday and 36 on Saturday. The seasonal high in the Windy City is 46. Detroit’s Thursday high of 45 was anticipated to hold Friday and then drop to 37 on Saturday. The normal mid-November high in Detroit is 43.

The National Weather Service in Detroit said, “Departing low-pressure system and cold front passage on Friday will keep rain chances around for most of the day. Current model runs show temperatures dropping down into the -4 to -6 range across Southeast Michigan by Friday afternoon. Middle and low-level dry air quickly filters into the region after the passage of the front in the afternoon, bringing precipitation quickly to an end by early evening. In addition to rain/snow showers…northwest winds will increase significantly during the daytime hours on Friday with gusts up to 25 miles per hour. High temperatures will be in the middle 40s across the entire County Warning Area on Friday, which will actually occur Friday morning before the front tracks across the region.”

Marketers in the Great Lakes said they weren’t buying any spot gas for the moment. “We can adjust balances for our customers and one large account is winding down its purchases. It isn’t using the full amount in its contract but probably has room in its storage to handle the balance,” said a Michigan marketer.

Cold weather also lifted quotes in the Midcontinent. Tom Moore, a meteorologist with The Weather Channel, said to expect “chilly 30s across much of Oklahoma Friday with a threat of freezing rain or freezing drizzle in western and northern sections of the state. By Sunday, the threat of a wintry mix returns to the southern Plains [and] temperatures will remain quite cold for November through the upcoming weekend.”

Ahead of the storage report, market bulls may have been looking at the season’s first withdrawal, but longer term they are going to have to cope with a tidal wave of new gas coming into the market from Pennsylvania and Ohio. Tennessee Gas Pipeline’s Northeast Upgrade Project and the Marcellus Pooling Point Project, the second phase of Williams’ Northeast Supply Link, and the Spectra Energy NJ-NY Expansion Project all came online this month and allowed Marcellus production to increase to more than 13 Bcf/d (see Shale Daily, Nov. 1).

“The Spectra NJ-NY supply has been flowing over 650,000 Mcf/d since nominations begin on Nov. 1,” according to Genscape. “With all the increase in Marcellus takeaway capacity, imports from the Gulf to the Northeast have decreased dramatically.” According to Genscape figures, Appalachia gas is flowing into the Midcontinent. “This is bearish news for Mid-Atlantic basis, but more so for the prices in the Gulf.”

Thursday’s Energy Information Administration storage report raised a few eyebrows. One school of thought had it that traders were in for a bullish surprise. Consensus estimates were swirling around the 30-plus Bcf mark. Last year, a relatively stout 36 Bcf was pulled, but the five-year average points to a more miserly 2 Bcf withdrawal.

IAF Advisors in Houston calculated a 45 Bcf reduction, yet a Reuters survey of 24 traders and analysts showed a sample mean of 33 Bcf with a range of minus 15 Bcf to minus 42 Bcf. Bentek Energy’s flow model predicted a 43 Bcf draw.

Last week, 20 Bcf was injected, and Bentek saw the sharp swing from injection to withdrawal as “residential and commercial demand increased more than 7.0 Bcf/d from the previous week as population-weighted temperatures in the Midwest averaged below 38 degrees for the week.”

More upside? The Energy Metro Desk survey came in at 39 Bcf, and John Sodergreen, the editor, said, “high-side risk seems clear to us this week. The range between the three categories we track is wide at 4.7 Bcf. Regular readers know that when the spread between the three categories is over 3 Bcf, the chance for a surprise is higher than 70%. This week everybody seems to point to the East Consuming Region for a surprise (higher) number. Lots of confusion in the market for this week’s report folks. Never a good sign.”