It was almost as if physical traders Thursday had an inkling of what the Energy Information Administration (EIA) storage report would be. 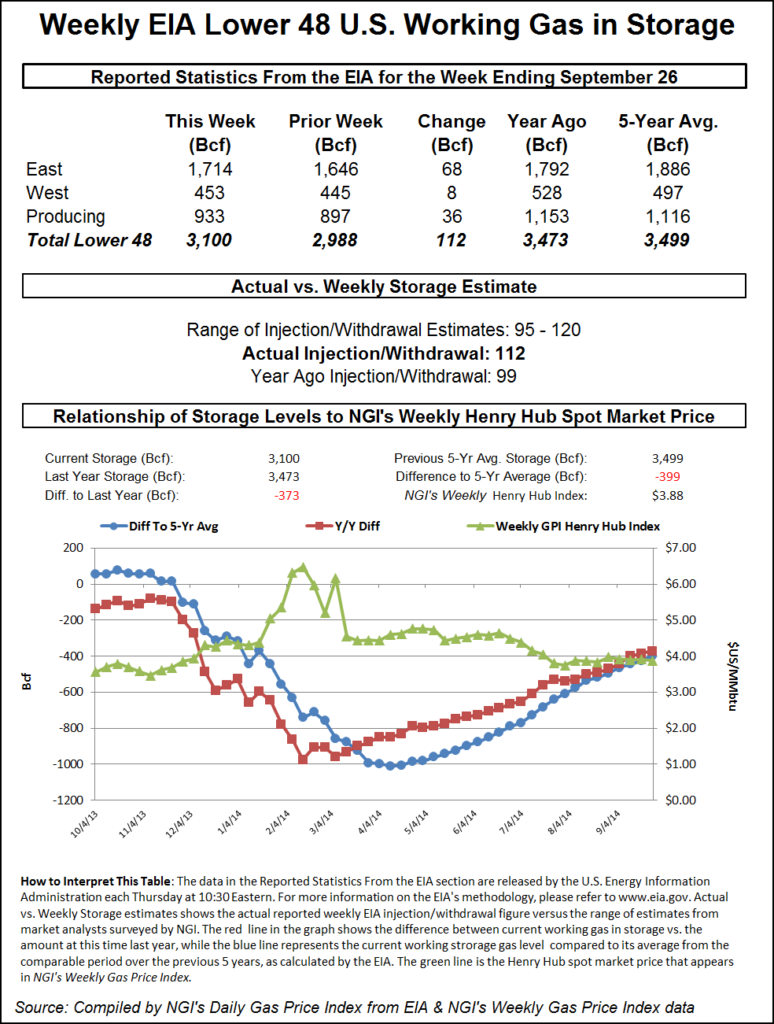 Typically, traders will try and get their deals done before the 10:30 a.m. EDT release of the data to avoid undesired volatility, but physical prices fell hard at all points, in many instances surpassing the losses on the screen presumably before the bearish storage data was released.

Along the Eastern Seaboard, forecasters called for seasonal temperatures tempered with load-killing showers and thunderstorms. Northeast points saw losses of $1 or more in some instances, and it was the rare market point that didn’t suffer a double-digit drubbing. Curiously, Saturday temperatures in Chicago could post record lows, yet quotes for Friday gas fell hard.

Near-term eastern weather offered little incentive for next-day purchases of gas. According to AccuWeather.com meteorologist Alex Sosnowski, following “relatively benign weather much of this week, a cool front will approach the Washington, DC, area Friday night with the potential for drenching rain and thunderstorms. High temperatures each day through Friday will be in the middle to upper 70s F, and clouds will limit sunshine most days. Only spotty shower activity is in the offing through Friday afternoon.

“From Friday evening into early Saturday, an approaching cool front can trigger drenching showers and perhaps a locally strong thunderstorm. The rain could be heavy enough to cause travel delays. The front is projected to bring locally severe weather to parts of the Central states as it pushes eastward into Friday, [and] a puff of cool air will follow the front over the weekend. High temperatures both days will be in the upper 60s to near 70. [Wind chill] temperatures can dip into the 50s at times during the day, factoring in wind and other conditions.”

AccuWeather.com predicted that the high Thursday in Washington, DC, of 78 degrees would ease slightly to 77 Friday before dropping to 71 Saturday. The normal early October high in Washington is 73. New York City was expected to see its Thursday high of 70 slide to 69 before climbing back up to 70 on Saturday. The normal high in New York is 69. Boston’s Thursday high of 56 was anticipated to rise to 64 Friday and climb to 67 Saturday, one degree above normal.

Next-day gas across the Great Lakes fell hard also, and buyers had a hard time getting motivated in spite of the prospects for record low temperatures in Chicago by Saturday. Tom Skilling of the Chicago Weather Center predicted that Thursday’s high of 74 would drop to 62 Friday, but by Saturday his forecast called for a high of only 48.

“The current record low max for the date is 48 degrees in 1935.” He said conditions would be windy, and unseasonably cold Saturday. “A heavy overcast which produces chilly, passing showers from time to time. Afternoon highs struggle to reach the 50 degree mark at many locations, [and] clouds break at times later Saturday night. Unseasonably cold nighttime temps. Northwest winds 15 to 25 mph and gusty — diminishing overnight.”

The 112 Bcf reported injection by the EIA in its Thursday morning release caught a number of traders by surprise. Traders were thinking about 5 Bcf lower and November futures fell to a low of $3.919 soon after the number was released. By 10:45 EDT November was trading at $3.935, down 8.8 cents from Wednesday’s settlement.

A Reuters survey of 24 traders and analysts revealed an average increase of 107 Bcf with a range of 95 Bcf to 120 Bcf. IAF Advisors was looking for a build of 106 Bcf, and Bentek Energy’s flow model also anticipated an injection of 107 Bcf.

“We had heard between 107 Bcf and 110 Bcf. That’s a pretty high number for this time of year. We are getting to the latter stages of the injection season,” said a New York floor trader. “We’re back to the old trading range, but this thing looked like it had some upward momentum on Monday.”

Analysts are thinking this might be as good as it gets. “[T]he build for the last week in September will likely mark the high point for injections during the second half of the season given the increase in weather-related load,” said Teri Viswanath, director of commodity strategy for natural gas trading at BNP Paribas, in a morning note to clients. “We had originally anticipated that restocking would peak this week; however, increased weather-related demand suggests that next week’s release will come in 2-4 Bcf lower than today’s report.”

Inventories now stand at 3,100 Bcf and are 373 Bcf less than last year and 399 Bcf below the five-year average. In the East Region 68 Bcf was injected and the West Region saw inventories increase by 8 Bcf. Stocks in the Producing Region rose by 36 Bcf.

Bentek Energy’s flow model calculated a 107 Bcf injection largely due to reduced power burn. “Total demand reached its lowest point since the June 27 storage week, falling to 54.7 Bcf/d on the week, down 2.3 Bcf/d week-over-week,” the company said in a report. “The drop was driven by further declines in power burn demand as well as a return to seasonal res/comm levels. Most fields around the country reported stronger volumes from the previous week, with the largest movers coming from the West Region, which is expected to return to the recent injection pace with a total sample build of 7 Bcf on the week.”

Not only were injections greater, but demand eased. “Total demand in the West fell 1.0 Bcf/d from the previous week, allowing for strong sample injections at PG&E and SOCAL. Power demand continued to decline slightly in the Producing Region, with a decline of 0.1 Bcf/d from the previous week to fall to 11.9 Bcf/d, the lowest average since the May 23 storage week. The drop in power burn demand prompted stronger sample injections within several fields in Bentek’s sample, although total injections within the region at many of the larger fields were in line with last week’s total, indicating a similar storage injection expected from the region.”

Joe Bastardi in his WeatherBELL Analytics 20 Day Forecast said he sees a conflict between the ECMWF (European) model and the GFS (Global Forecast System). Nonetheless, the “bottom line is that a trough never progresses to the East Coast [and remains] in Plains next seven days, then it backs westward with time.” Longer term, he said the JMA (Japan Meteorological Association) model calls for “October evolution of temperatures similar to September, colder overall centered in Plains for the front of the month with massive warmup erasing much of the cool.”

Mexico’s Energy Ministry (Sener) has ordered the unification of the Zama discovery offshore Mexico and has given Houston-based exploration and production company Talos Energy Inc. and Mexican state company Petróleos Mexicanos (Pemex) 120 days to come up with terms of how to carry out joint development of the field. In May, Mexico upstream regulator Comisión…