Physical gas prices for Friday delivery made a broad retreat in Thursday’s trading as most traders elected to get their deals done prior to the 10:30 a.m. EDT release of government inventory reports. 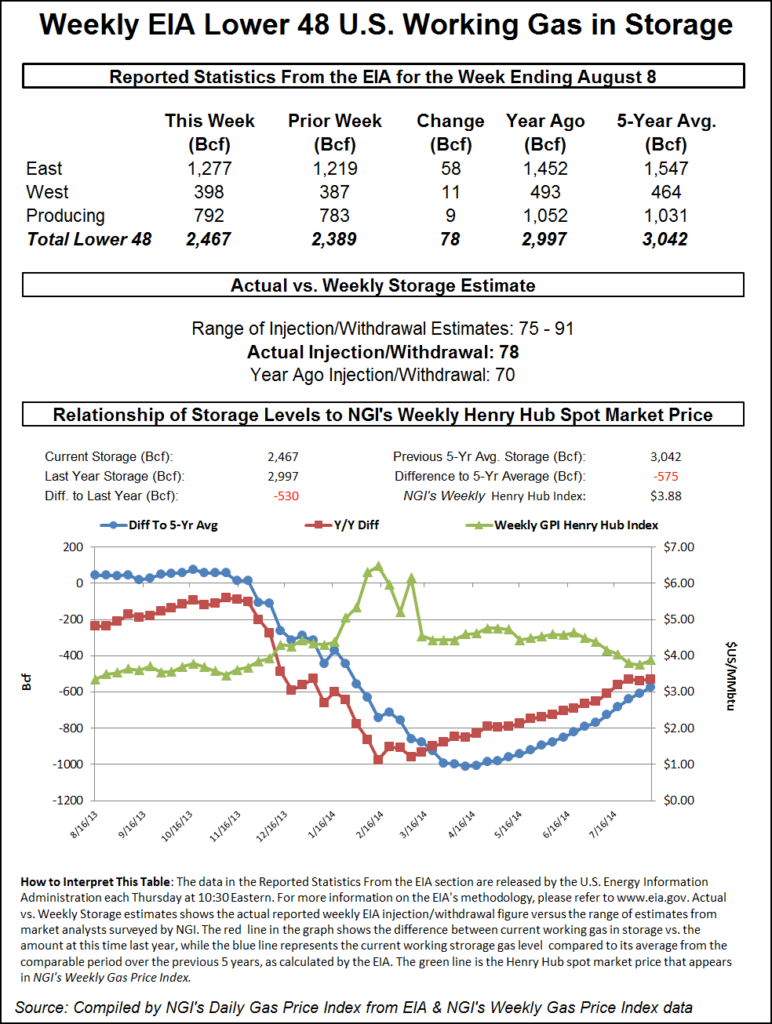 Power demand and prices were lackluster and the trading landscape was awash in red ink with Northeast, Mid-Atlantic and Marcellus locations all posting double-digit losses. The overall market was down 8 cents.

Futures prices, on the other hand, scooted higher following the release of government storage figures showing 78 Bcf was injected for the week ended Aug. 8, well below market expectations. At the close, September had added 7.5 cents to $3.906 and October rose 6.8 cents to $3.930. September crude oil fell $2.01 to $95.58/bbl.

“Dry air working into the nation’s capital will not only keep soaking rain absent through Friday but also typical August heat. High temperatures will be held to the lower 80s on Friday, which is more common during the first half of September. A high of 87 F is typical in mid-August. Low humidity will complement the weather, creating ideal conditions for many outdoor activities.

“The dry air is being ushered in following the passage of the storm system that caused Islip on Long Island to shatter New York state’s 14-hour rainfall record at 13.27 inches. Temperatures will rebound back into the middle 80s to start the weekend, but humidity will remain comfortably low and dry weather will persist. The return of higher humidity and thunderstorms is expected for Sunday.”

AccuWeather.com also reported that the high temperature Thursday in Boston of 76 degrees was expected to slip to 75 Friday before reaching 78 on Saturday. The normal high in Boston is 80. New York City’s Thursday and Friday high of 77 was seen rising to 81 on Saturday, but the normal high in New York is 83. Philadelphia’s 79 high on Thursday was expected to drop to 77 Friday before temperatures were seen jumping to 82 on Saturday. The seasonal high in Philadelphia is 86.

Going into the Thursday morning release of Energy Information Administration storage data, traders expected to see another stout reduction in the storage deficit relative to both last year and the five-year averages. Current thinking was in the neighborhood of 84 Bcf, but as previous Thursday’s have shown, a difference of just a few Bcf from expectations can mean sizeable price moves. Last year, 70 Bcf was injected, and the five-year average is for a 45 Bcf increase.

Thursday was no exception. September futures surged to a high of $3.947 soon after the number was released and by 10:45 EDT September was holding $3.914, up 8.3 cents from Wednesday’s settlement.

IAF Advisors of Houston calculated a build of 85 Bcf, and United ICAP came up with an 83 Bcf injection. A Reuters survey of 24 traders and analysts revealed an average of 83 Bcf with a range of 75-91 Bcf.

Looking forward, Bentek comes in on the high side of estimates for season-ending inventory builds. “Even with the high power demand relative to recent summer levels, the storage injection marks a strong build compared to historic averages and brings inventories near the 2.4 Tcf mark to start August, which keeps the projected end-of-season inventory mark on track to reach above 3.5 Tcf, and a continuation of mild weather in August from July could push inventories closer to 3.6 Tcf by the end of the refill season,” it said.

“This second miss on the bullish side of expectations does suggest that the background supply/demand balance may have firmed slightly, which may carry over into somewhat smaller refills going forward, although still likely to exceed five-year average rates,” said Tim Evans of Citi Futures Perspective.

Inventories now stand at 2,467 Bcf and are 530 Bcf less than last year and 575 Bcf below the five-year average. In the East Region 58 Bcf were injected and the West Region saw inventories up by 11 Bcf. Inventories in the Producing Region rose by 9 Bcf.

NatgasWeather.com saw Wednesday’s price slide getting more than its fair share of assistance from near-term weather forecasts. “[Y]ou would have to give an assist to weather patterns as they were very bearish to start the week and then gradually trended cooler for the last week of August, especially over the northern U.S. The coming warm-up next week will still happen and should bring summer temperatures to the East Coast for several days. So while the warm up has flaws, there will still be regions of the country experiencing reasonably hot temperatures, such as the southern and eastern U.S. This will bring a bit leaner builds after the next two, but they will still be much larger than normal,” the company said in a report.

“[Thursday’s] build is expected to come in around 81-84 Bcf, which would again be more than 30 Bcf greater than the five-year average. Momentum clearly now favors the bears, and we expect if the number comes in neutral or larger than estimates, prices will likely continue to sell off toward $3.75. We thought $3.75 might at some point get tested again due to strong bearish weather headwinds, we just didn’t think it would get there over a 24-hour period. This makes $3.75 more vulnerable this time around. We continue to view weather patterns and builds as bearish, which should continue to pressure prices for a little while longer. However, they will ease a bit next week as warmer temperatures begin to take hold.”