Weekly natural gas spot prices posted yeoman-like gains for the week ending Oct. 3. Points in South Louisiana, the Midcontinent, and South Texas made double-digit strides higher, and most locations saw gains of a nickel to a dime. Only a few Northeast points fell into the loss column, and theNGI National Spot Weekly Gas Price average was $3.71, up 10 cents. 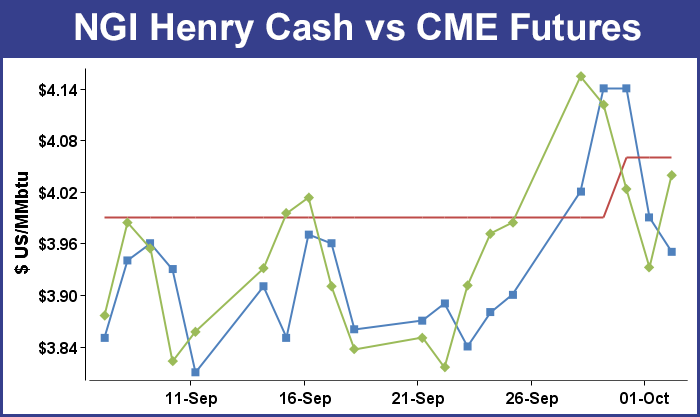 Of the actively traded points Gulf spots took the lead with both the Henry Hub and Florida Gas Zone 3 tied for the greatest gains at 18 cents to average $4.06 apiece. The greatest decline was seen at Tennessee Zone 6 200 L with a drop of $1.01 to average $3.47.

South Louisiana points were strong overall as well. The Henry Hub was on top of the leader board with its 18-cent gain, but at the low end Columbia Gulf put in a strong performance with a rise of 12 cents to average $3.95.

In the Midcontinent gas at Northern Natural Demarcation was top dog with a gain of 16 cents to average $4.02 and the weakest Midcontinent point, the NGPL Midcontinent Pool, managed to add a respectable 8 cents to $3.85.

The Northeast — home of the Marcellus Shale — maintained its reputation of wide-ranging trading with its greatest gainer, the Tennessee Zone 4 200 Line adding 17 cents to $2.23, and the low end was the $1.01 decline seen at Tennessee Zone 6 200 L to an average of $3.47.

November futures gained 5.5 cents on the week to settle at $4.039. In Thursday’s trading it was almost as if physical traders had a premonition of what the Energy Information Administration (EIA) storage report would be. Typically traders will try and get their deals done before the 10:30 a.m. EDT release of the data to avoid undesired volatility, but physical prices fell hard at all points, in many instances surpassing the losses on the screen presumably before the bearish storage data was released. The EIA reported an injection of a plump 112 Bcf for the week ended Sept. 26, about 5 Bcf greater than what the market was expecting and as a result, futures careened lower.

The 112 Bcf reported injection by the EIA caught a number of traders by surprise,and November futures fell to a low of $3.919 soon after the number was released. By 10:45 EDT November was trading at $3.935, down 8.8 cents from Wednesday’s settlement.

A Reuters survey of 24 traders and analysts revealed an average increase of 107 Bcf with a range of 95 Bcf to 120 Bcf. IAF Advisors was looking for a build of 106 Bcf and industry consultant Bentek Energy utilizing its flow model also anticipated an injection of 107 Bcf.

“We had heard between 107 Bcf and 110 Bcf. That’s a pretty high number for this time of year. We are getting to the latter stages of the injection season,” said a New York floor trader. “We’re back to the old trading range, but this thing looked like it had some upward momentum on Monday.”

Inventories now stand at 3,100 Bcf and are 373 Bcf less than last year and 399 Bcf below the 5-year average. In the East Region 68 Bcf were injected and the West Region saw inventories increase by 8 Bcf. Stocks in the Producing Region rose by 36 Bcf.

Bentek Energy utilizing its flow model calculated a 107 Bcf injection largely due to reduced power burn. “Total demand reached its lowest point since the June 27 storage week, falling to 54.7 Bcf/d on the week, down 2.3 Bcf/d week-over-week,” the company said in a report. “The drop was driven by further declines in power burn demand as well as a return to seasonal res/comm levels. Most fields around the country reported stronger volumes from the previous week, with the largest movers coming from the West Region, which is expected to return to the recent injection pace with a total sample build of 7 Bcf on the week.”

Not only were injections greater, but demand eased. “Total demand in the West fell 1.0 Bcf/d from the previous week, allowing for strong sample injections at PG&E and SOCAL. Power demand continued to decline slightly in the Producing Region, with a decline of 0.1 Bcf/d from the previous week to fall to 11.9 Bcf/d, the lowest average since the May 23 storage week. The drop in power burn demand prompted stronger sample injections within several fields in Bentek’s sample, although total injections within the region at many of the larger fields were in line with last week’s total, indicating a similar storage injection expected from the region.”

Assessing the trading landscape a Rocky Mountain producer isn’t optimistic a cold winter similar to last year can elevate prices. “Even if it is as cold as last year, you still have production up over 4 Bcf/d. If everything stays the same and you have another 4 Bs a day coming out, I just don’t see it. Even if Marcellus drilling goes to zero you still have 1,800 wells waiting for pipelines to come on,” he said.

Nonetheless, top traders for the long term are cautious bulls. “Although selling was contained at about the $3.90 area, we feel that the storage number opens the gates for additional slippage to our expected low side parameter of $3.85. For now, the short-term temperature outlook appears slightly bullish but well discounted,” said Jim Ritterbusch of Ritterbusch and Associates in closing comments Thursday to clients.

“Additional selling from here of more than 8-10 cents will likely require some mild temperature trends that are not currently on the radar. We don’t look for the large speculative entities to press the short side aggressively below today’s lows with storage 11.5% below average and with at a time of year that favors seasonal strength. Tomorrow’s COT report is apt to show a sharp cut in net non-commercial shorts given the approximate 25-cent price advance that developed during the latest reporting period.

“From a broader perspective, this still looks like a choppy trading affair within a price range that we have defined as about $3.85 to $4.20,” Ritterbusch said. “We will look to approach the market accordingly while at the same time gradually establishing deferred bull spread positions as a longer-term strategy that could capitalize on a possible early start to a cold winter.”

Mid-Atlantic and Marcellus points posted stout double-digit losses. Producing region locations lost a couple of pennies of their own. Overall, the market dropped a dime. Always vigilant futures traders were looking further out and saw enough in the way of colder temperatures to prompt buying. At the close, November had advanced 10.7 cents to $4.039 and December was higher by 10.5 cents to $4.117. November crude oil continued its downward spiral losing $1.27 to $89.74/bbl.

Weather forecasters in New England had to sort out a couple of cold fronts, showers and thunderstorms along with a few periods of dry and cooler weather. The National Weather Service in southeast Massachusetts said, “a soupy mess of low clouds and fog lingers tonight [Friday], especially over eastern New England into Saturday morning. Remaining mostly cloudy and cool Saturday prior to a cold frontal passage around Saturday evening along and ahead of which a line of rain with embedded heavier showers and isolated thunderstorms are expected.

“Dry and cool weather follows on Sunday to close out the weekend. Milder weather returns Monday and especially Tuesday ahead of the next cold front. Another period of showers expected Tuesday night into early Wednesday with dry weather following for Thursday.”

Temperatures along the Eastern Seaboard were forecast to hover right around normal. Boston’s Friday high of 60 was seen warming to 65 Saturday before rising to 67 by Monday. The normal high in Boston in early October is 66, according to Wunderground.com. New York City’s high on Friday of 70 was predicted to ease to 69 Saturday before making it back up to 70 on Monday. The normal high in the Big Apple is 68. Philadelphia’s 73 maximum reading Friday was anticipated to slide to 70 on Saturday and inch back up to 71 Monday. The seasonal high in Philadelphia is 68.

With conditions like this, who needs to buy gas? Not New Yorkers. Packages for weekend and Monday delivery for gas headed to New York City on Transco Zone 6 traded as low as $1.45 and finished with an average of $1.51, down 40 cents. Dominion South went quite a bit lower, with a low trade of $1.10, just a nickel higher than its December 1998 low of $1.05. Dominion South at the end of the day averaged $1.52, down 31 cents.

Producing zones lost a couple of pennies. Gas at Demarcation fell 2 cents to $3.94, and at the NGPL Midcontinent Pool weekend and Monday gas changed hands at $3.78, down 2 cents. At Northern Natural Ventura, parcels were seen at $3.86, down 4 cents, and on ANR SW gas fell a nickel to $3.72. On NGPL TX OK weekend and Monday deliveries lost a penny to $3.87.

Weather forecasters for the near term are calling for cooler temperatures to make an appearance at the higher latitudes. Through the middle of next week Natgasweather.com said, “Cooler Canadian air continues to sweep across the northern U.S. along with heavy rains, strong thunderstorms, and even snowflakes into the coldest air. As this system tracks the Midwest and Northeast this weekend, overnight lows will drop into the 30s and 40s, driving early season heating demand. Southern California, including high population coastal cities, will see temperatures in the 90s to lower 100s as offshore winds strengthen. A fresh cool blast will arrive early next week for the north-central U.S. before warming occurs across much of the nation late in the week.”

The Labor Department in its closely watched September Employment Report indicated non-farm payrolls increased by 248,000, much stronger than expected. The unemployment rate fell to 5.9%, the first time below 6% since 2008. The Dow Jones Industrial Average gained 209 points to 17,010.