Physical traders Thursday made sure they got their deals done before the Energy Information Administration (EIA) storage report and they elected to sell and sell often. Prices at some Northeast points tumbled by double digits ahead of a cold front, but for the most part the day’s broad decline was limited to a few pennies. 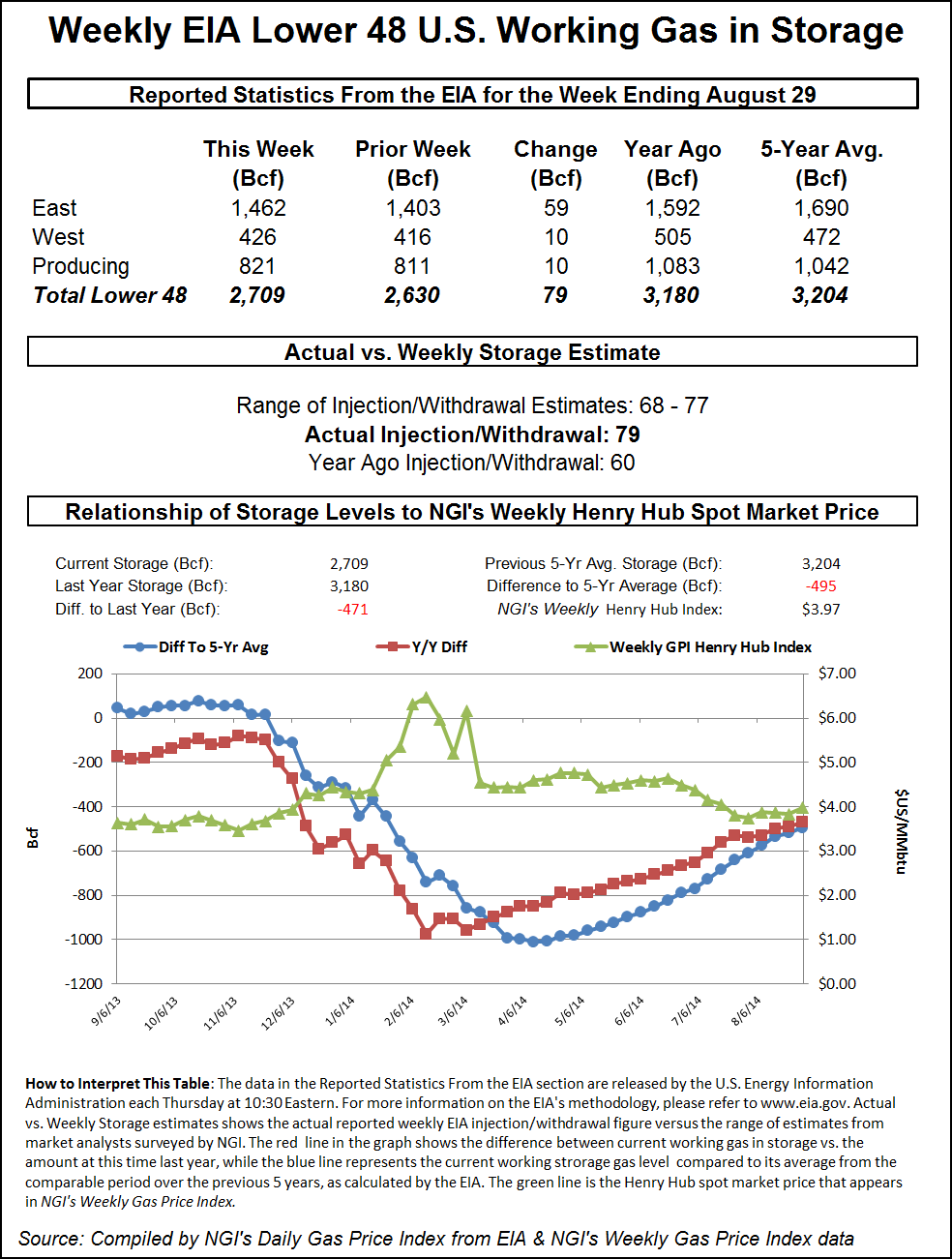 New England, the Mid-Atlantic and Marcellus all endured a double-digit pounding, but the overall market was down a modest 5 cents. The EIA reported an injection of 79 Bcf, about four to nine Bcf greater than market expectations, and futures took a third consecutive hit, albeit a small one. At the close, October had dropped 2.8 cents to $3.819 and November was lower by 2.5 cents to $3.869. October crude oil fell $1.09 to $94.45/bbl.

Temperatures at eastern population centers were expected to hold steady and increase going into the weekend, but not before a cold front was expected to march through the area. The National Weather Service in New York City said “high pressure over the area through tonight will shift offshore Friday into Friday night as a cold front approaches from the west. The cold front will move across on Saturday…then high pressure will build into the northeast through early next week.”

Temperatures in the Mid-Atlantic were forecast to hold steady at elevated levels before increasing going into the weekend. Wunderground.com said New York’s 86 high Thursday would hold into Friday and reach 91 on Saturday. The normal high for the Big Apple in early September is 79. Philadelphia’s Thursday high of 90 was expected to ease to 88 Friday and rebound to 92 on Saturday. The seasonal norm for Philadelphia is 79 as well. Washington, DC’s Thursday high of 89 was seen advancing to 91 Friday and 94 Saturday, 10 degrees above normal.

Whether the expansion taking gas out of the Marcellus to higher priced market areas will have a measurable price impact remains an open question. A Rocky Mountain observer said, “I’ve heard they have over 1,300 completed wells, and Bentek says we have 2 Bcf/d of new [Marcellus] capacity coming online in December. Is the 300 MMcf/d [from the Team South expansion] really going to make a difference? It might help,” he said.

For the moment, Marcellus prices are moving the other way. Next-day gas on Transco Leidy fell 21 cents to $2.30, and deliveries to Tennessee Zone 4 Marcellus slipped 12 cents to $2.28. Gas on Millennium shed 16 cents to $2.44.

The Thursday morning release of storage data was expected to show one of the leaner builds of the season, still well above historical averages nonetheless. Last year, 60 Bcf was injected, and the five-year average stands at 56 Bcf. Expectations for the EIA report were in the mid- to upper-70 Bcf range.

The injection of 79 Bcf was about 5 Bcf more than market surveys and independent analyst projections, and October futures fell to a low of $3.789 soon after the number was released and by 10:45 a.m. October was holding $3.804, down 4.3 cents from Wednesday’s settlement.

With the day’s decline, traders lamented that “we are back to the old trading range of $3.75 on the downside and $4 on the upside. We were looking for a build of 73 Bcf to 75 Bcf,” said a New York floor trader.

Traders saw the plump report as auguring more ample future supplies. “The 79 Bcf net injection was more than the consensus expectation and also bearish relative to the 56 Bcf five-year average number,” said Tim Evans of Citi Futures Perspective. “It also suggests a weakening of the background supply-demand balance, possibly related to a further increase in production, with bearish implications for the weeks to follow.”

Phillip Golden, director of risk and product management at EMEX, noted that the storage report was “well above expectations,” which were roughly for a 70 Bcf build. “Despite this strongly bullish news, the market is down only slightly after this morning’s report,” Golden said shortly after the release. “The mild reaction to a bearish storage report coupled with the fall in prices this week suggests that the market may be at or near a floor. As previously stated, EMEX believes the next six weeks will present good buying opportunities…”

Golden added that the week 22 report failed to follow the historical patterns, with injections increasing compared to week 21. “As previously noted, with what appears to be a late onset summer, the potential for injection numbers to remain flat or decline slightly week over week exists and would be contrary to historical norms.”

Inventories now stand at 2,709 Bcf and are 471 Bcf less than last year and 495 Bcf below the five-year average. In the East Region 59 Bcf was injected and the West Region saw inventories up by 10 Bcf. Inventories in the Producing Region also rose by 10 Bcf.

Going forward, traders see much more robust injections once a brief period of late-week warmth dissipates. “Temperatures will be fairly warm today and Friday over some very important cooling demand states and could help support prices, especially regionally,” said Natgasweather.com in a Thursday morning report. “However, by Saturday temperatures will be very pleasant as a fast-moving cool front sweeps through and lasts into early next week. All eyes then turn to the impressive cool blast that will follow at the end of next week, which should push quite deep into the southern U.S.

“There should be cold enough temperatures within the core of this weather system to drive modest heating demand over portions of the northern Plains, Midwest and Northeast. However, it should be a fairly quick blast of cooler temperatures and not last more than 24-48 hours. More importantly, much more pleasant temperatures will also set up over the southern U.S., where cooling demand will be lower than normal to counter. And as a result, future builds will be much larger than normal, especially when considering there will be a mild and very comfortable pattern to follow for the third week of September.”

Saal expects the market to test $3.860 to $3.838 followed by a test of a second value area at $3.947 to $3.899. “Eventually,” he sees $4.053 to $4.031 being tested as well. “Usually on EIA storage report day the market shows a lot of price volatility and now there are pricing targets. In addition, due to EIA, I expect to see a Market Profile neutral day pattern — large price moves in both directions,” he said in Thursday morning comments to clients.

Technical traders see holding $3.80 as key to the resumption of any price advance. Brian LaRose, a technical analyst at United ICAP, “peg[s] $3.805-3.781 (0.7862-0.852) as the lowest levels consistent with any corrective retreat. Carve out a bottom in front of this zone, and the bulls will have an opportunity for a larger degree recovery,” he said.