Those keeping a close eye on a six-county region in Southeast Ohio where drilling in a liquids-rich area of the Utica Shale has steadily increased recently got a bit more good news when Carrizo Oil and Gas Inc. announced the first results at its Rector 1H well in Guernsey County, located in the center of the drilling rush. 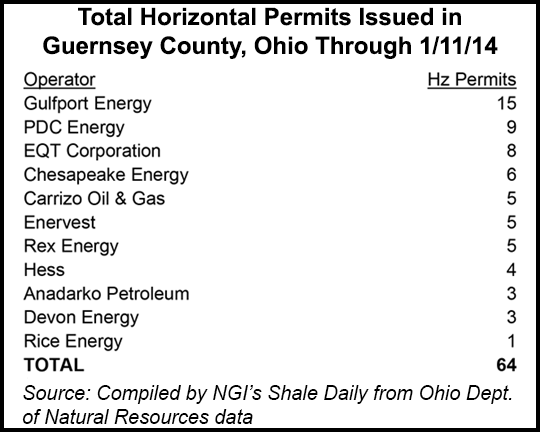 Carrizo reported a high rate of initial condensate production at the Rector well and financial analysts billed the results as favorable compared to other operators with wells nearby or in counties adjacent to Guernsey. The well tested at a peak gross rate of 1,680 b/d of condensate and 5.6 MMcf/d of “rich natural gas,” with a Btu content of 1,248 on a 24/64 inch choke, the company said in an update Thursday. The Rector 1H was drilled to a true vertical depth of 7,456 feet with an effective lateral of 7,890 feet and was completed with 31 hydraulically fractured stages.

Carrizo said it expects to continue conducting flow and pressure tests at the Rector, with the well expected to be put into sales sometime before the end of June.

According to figures provided by Tudor, Pickering, Holt & Co. (TPH), the well’s content works out to roughly 2,800 boe/d for a mix of 60% condensates and 9% natural gas liquids (NGL) — a figure well above the initial production rate of 1,600 boe/d that the company had anticipated.

A big question for the marketplace now, wrote TPH analysts in a research note, is how such a condensate well will perform over the next 12-18 months once line pressure is reduced. Analysts said if the well adheres to Carrizo’s anticipated type curve and that model applies to a consistent stretch of its nearby acreage, 1.5 million boe could ultimately be recovered in the area.

Carrizo owns about 22,000 net acres in the Utica, most of it in Guernsey County. In 2012, the company divested its assets in the northern part of the play and said at the time that it would look to focus on the formation’s more active and proved southern tier (see Shale Daily, Oct. 17, 2012). Last year, the company exercised an option to purchase a 50% stake in a joint venture with Avista Capital Partners for $63 million, giving it 14,000 acres in Guernsey County.

The Rector well was permitted last April, and the company has four other permits in the county, according to state records. The state has issued a total of 1,042 permits, with most of those issued in a stretch running from Columbiana to Washington counties. Sixty-four permits have been issued to date in Guernsey, and drilling is just now starting to pay off for those with acreage there.

Operators have turned their attention to a six-county region in the state, including Belmont, Monroe, Harrison, Noble, Carroll and Guernsey (see Shale Daily, Nov. 19, 2013). The state’s latest production report for 3Q2013 shows that these counties accounted for more than half of the 33.6 Bcf extracted in the state (see Shale Daily, Jan. 2). One analysis from Topeka Capital Markets showed operators produced 666 MMcfe and 111 million boe in Guernsey County during the third quarter.

“While we don’t believe the street is questioning the quality of Carrizo’s Utica acreage, a good well result certainly helps,” said David Tameron, senior analyst at Wells Fargo Securities. “The Rector 1H is in the southern portion of Guernsey County and nearby industry wells that have largely been taken as positives.”

On Wednesday, Rex Energy Corp. indicated that its five-well J. Anderson pad in Guernsey County was producing at a five-day sales rate of 1,852 boe/d, which was met with optimism by those who reviewed the results (see related story). Nearby, in Harrison County, Gulfport Energy Corp.’s Boy Scout well was the top oil producer in the state’s third quarter report with 41,617 bbl produced. To the east of Guernsey, in Belmont County, Gulfport also had the best producing gas well at its Stutzman pad with 1.25 Bcf produced.

Guernsey County issued a total of 15 horizontal permits to Gulfport through Jan. 11 and five to Carrizo, according to Ohio Department of Natural Resources data. Rounding out the top five were PDC Energy (nine permits), EQT Corp. (eight permits) and Chesapeake Energy (six permits).