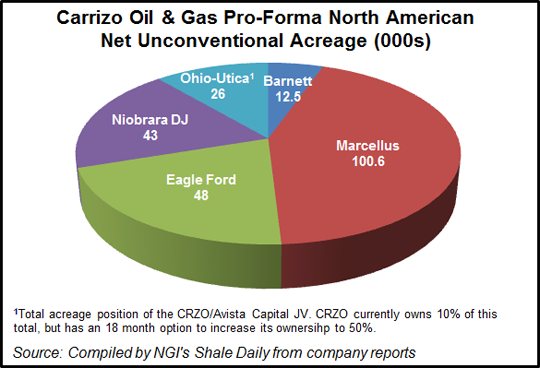 The $82.5 million joint venture (JV) provides the Delhi, India-based state-run producers a nonoperated interest in “substantially all” of Carrizo’s Niobrara operations, which primarily are in Weld and Adams counties. Carrizo has an estimated 61,500 net acres in the Niobrara.

Carrizo in August had indicated it was close to completing a partnership deal in the Niobrara (see Shale Daily, Aug. 10). It also said at the time it was looking for a JV partner for its Utica Shale holdings, a deal that has yet to be announced.

Included in the Niobrara transaction is the sale of nearly 18,100 net acres and close to 555 boe/d from 24 gross producing wells that are 75% weighted to oil. Subsidiaries of Oil India would control a 20% stake in the JV, with IOC holding the remaining interest.

“We plan to apply the cash portion of the transaction to help fund our remaining 2012 capital expenditures and the drilling carry will allow the addition of a second drilling rig in the Niobrara in early 2013,” said Carrizo CEO Chip Johnson. “We estimate that the acceleration in development activity net to Carrizo from the additional rig will offset our future lower working interest and will result in an increase in Niobrara oil production net to our shareholder’s interests over the course of 2013 compared to our pre-JV internal estimates.”

Oil India Chairman S.K. Srivastava said his company had been eyeing “acquisitions and new opportunities to bolster our overseas portfolio and [was] keen on joint ventures in countries with geopolitical stability.”

Under the terms of the JV, Carrizo would receive $41.25 million in cash and an additional $41.25 million in the form of a drilling carry that would be applied to fund a portion of its share of future Niobrara development costs. The carry is anticipated to be fully utilized by early 2014. The transaction has an effective date of Oct. 1, 2012.

The latest transaction is not the first between Carrizo and India operators. Reliance Industries Ltd., India’s largest company, has stakes in three JVs in U.S. shale gas, including one with Carrizo in the Marcellus Shale that it completed in 2010. In that deal, Reliance acquired a 20% stake in close to 52,200 net acres of Carrizo’s leasehold in Pennsylvania. India’s state-run natural gas utility Gail (India) Ltd. last year also acquired a 20% stake in Carrizo’s Eagle Ford Shale leasehold (see Shale Daily, Sept. 30, 2011).

Carrizo said it also has completed the sale of most of its legacy producing properties on the Gulf Coat, which primarily are in Texas and Louisiana, for $19.5 million in cash. Net production sold was estimated at 120 b/d of oil/condensate and 5,000 Mcf/d of natural gas. The transaction has an effective date of July 1, 2012.