Carrizo Oil & Gas Inc. said 2013 marked the end of its transition from a company focused on gas to one narrowly focused on oil production. 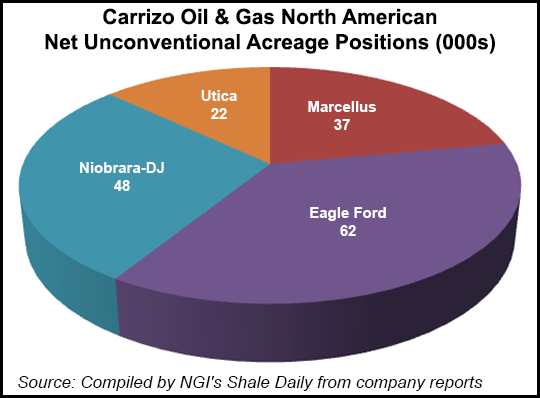 Although Carrizo sold nearly 45% of its 2012 reserve base and took a $45.4 million non-cash loss after divesting its remaining properties in the Barnett Shale in October (see Shale Daily, Sept. 5, 2013), its new reserves and production are heavily oil leveraged, which now accounts for about 60% of those metrics.

The company’s transition to oil began in 2010. Now it will continue to narrow its focus on Texas’ Eagle Ford Shale play, where its crude oil production increased by 9% year/year in 4Q2013 to 11,200 b/d and accounted for 68% of its fourth quarter drilling and completion costs.

Carrizo expects to complete a series of test wells with 330 foot downspacing in the Eagle Ford in the second quarter, that if successful, could add four years to its inventory in the play. The company has 102 net wells producing in the oily Eagle Ford, where it drilled 11 wells last year and completed another 12.

This year, Carrizo will run three rigs in the play and drill another 47 net wells. The company’s oil leverage helps lower its exposure to the volatility of dry gas and liquids prices, company officials said. They plan to send some revenues from the Eagle Ford to the Niobrara drilling program in Colorado, a promising program in Pennsylvania’s Marcellus Shale and a nascent play in Ohio’s Utica Shale, where the company is focusing on a liquids-rich fairway.

“We’re not exposed to natural gas liquids [NGL], natural gas or ethane prices. We’re receiving 99% of the New York Mercantile Exchange [Nymex] price for our oil,” said COO Paul Boling. “Our move to oil has worked to fund a longer term growth rate. We can accelerate faster than companies that are producing gas.”

Despite an oilier production mix, though, and a price environment that suits it, Carrizo couldn’t lower its exposure to some of the more daunting aspects that other operators in Colorado and Ohio faced last quarter.

Overall production in 4Q2013 was 24,772 boe/d, a decrease of 4% from 4Q2012. That decrease was largely attributable to the company’s divestiture in the Barnett Shale, but historic cold across much of the country this winter led to the loss of 400 boe/d of production in the Niobrara. Compounding matters, were midstream constraints in the Marcellus Shale and depressed basis differentials there as well.

“We had as much as 400 boe/d shut-in,” CEO Chip Johnson said of the Niobrara. “Our biggest problem was the freezing of our jet pumps. When that happens everything goes down and they have to thaw before things come back on.”

At its wells in northeast Pennsylvania’s Susquehanna County, where Carrizo earned a better price for its gas entering the Millennium pipeline last year, Johnson said a compressor station burned out and squeezed its production in the area. To the south, in Wyoming County, inauspicious basis differentials on gas heading into the Transco and Tennessee pipelines forced the company to curtail some production, he added.

Adjusting for its Barnett Shale divestiture, however, the company saw a 31% year/year increase in 4Q2013 production. That mix was a bit gassier than some financial analysts had expected at 13,033 bbl/d, compared to natural gas and NGL production of 70.4 MMcfe/d, but a reduction in drilling and completion costs during the quarter had analysts shrugging off the production mix.

Carrizo will focus on completing Marcellus wells this year and drill only one new well because of lower forecasted basis differentials. It is also currently testing new downspacing concepts that it hopes will add another 50 gross locations to its Marcellus inventory. Without providing much details, company officials said they will also continue to work on midstream solutions there.

In the Utica Shale, Carrizo still lacks adequate takeaway capacity. Company officials said they’re reviewing two proposals from the basin’s top two midstream providers before making any concrete plans. The company’s first Utica well in southeast Ohio’s Guernsey County, the Rector 1H, has averaged 553 b/d of condensate in its first 48 days of production and another 2 MMcf/d of rich natural gas. Carrizo said it will spud its next Utica well in March and drill seven wells there this year.

Crude oil production in the Niobrara Shale stayed flat in 4Q2013 at 1,800 b/d as the result of inclement weather. The company plans to drill 11 wells there this year, and it will participate in a number of downspacing tests too.