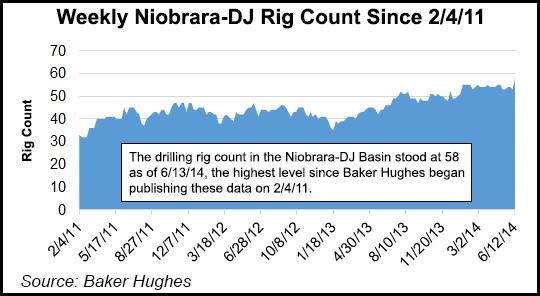 Production from those wells averaged 89% oil at a time when the company continues to look for liquids in Texas’ Eagle Ford, Ohio’s Utica Shale and the Niobrara to create more value for its balance sheet (see Shale Daily, Feb. 27, 2013).

The pilot wells were spaced at 300 feet, amounting to 40-acre spacing. The company had previously confirmed that 60-acre spacing worked in the Niobrara (see Shale Daily, Feb. 25), but Wells Fargo Securities analyst David Tameron said moving forward with 40-acre spacing could add 128 new drilling locations in addition to Carrizo’s current 453 in the play.

The company has defined three prospective areas across its 47,500 net acres in northeast Colorado. It said Wednesday that the 1,021 boe/d IP rate exceeded its 800 boe/d type curve for Area 1, where the company has seen the best results.

CEO Chip Johnson said the wells were drilled to two Niobrara benches, which are both currently meeting expectations. He said in a statement that “while more production history is needed on these wells, the early results imply that there could be significant upside to our current drilling inventory.”

The company also said it’s drilling a second multi-bench 40-acre pilot nearby in Weld County, which calls for five wells. The Eagle Ford has driven much of the company’s business to date, where it has also spent most heavily. In the first quarter, the company hit record oil production of 15,022 b/d, a 61% year-over-year increase, with the Eagle Ford accounting for 12,700 b/d.

Carrizo also reported in May what it said could be the best condensate well in Ohio’s Utica Shale, the Rector 1H in Guernsey County, which produced 500 b/d of condensate on a gross basis during a long-term stabilized test (see Shale Daily, May 6). A vertical rig has arrived to spud the company’s second Utica well, the Brown 1H, also in Guernsey County, the company said Wednesday.

Financial analysts expressed optimism over the latest Niobrara test results, with those from Tudor, Pickering, Holt & Co. agreeing with Johnson and offering a cautionary note by saying it will be “important to monitor decline curves” at Bringelson Ranch in the coming months. Tameron was also positive, but said in a note to clients that given some of the company’s results in the Eagle Ford and the Appalachian Basin, it is likely Carrizo’s Niobrara focus will remain on the backburner.

“As we’ve stated before, we believe longer-term the company is a seller rather than a buyer of Niobrara acreage given their superior returns and large opportunity set in the Eagle Ford,” he said. “Today’s announcement clearly has the potential to enhance the value attributed to the company’s Niobrara program. But from our perspective, our longer-term views on Carrizo’s Niobrara aspirations remain unchanged.” 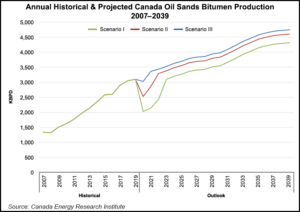 Cenovus Energy Inc. announced Sunday it would take over Canadian oil and gas rival Husky Energy Inc., combining two of the country’s top producers, in a share swap valued at C$3.8 billion ($2.85 billion). Total estimated value of the transaction, including debt, is C$23.6 billion ($17.7 billion). The run rate synergies achieved by the corporate…