Carrizo Oil & Gas Inc. slashed its capital budget by more than one-third and plans to pivot from the Eagle Ford Shale back to the Permian Basin’s Delaware sub-basin, dropping three of its six rigs to kick off its drilling program for the new year. 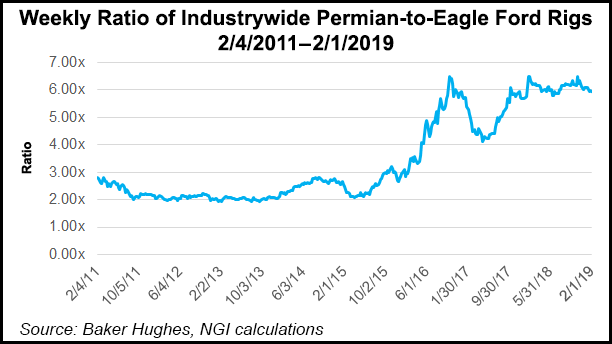 “Our dual-basin portfolio continues to provide us with significant flexibility,” Johnson said. “Our pivot to the Eagle Ford Shale during 2018 paid off as its exposure to premium, seaborne crude oil markets insulated us from the regional price differential blowouts seen in the Permian Basin. This allowed us to maintain some of the strongest margins in the industry.

“With price differentials currently improving in the Permian Basin due to the imminent addition of pipeline capacity out of the region, we are planning to begin shifting capital back to the Delaware Basin this year.”

Carrizo plans to reduce its rig count in the Eagle Ford from four to one by the end of 1Q2019, and will run two rigs in the Delaware during the first half of the year. It plans to deploy a third rig in the latter during the second half of 2019. Under that scenario, Carrizo expects to drill 65-75 net operated wells and complete 85-95 net operated wells in 2019. The company said it also plans “to participate in several net nonoperated wells during the year.”

With the company electing to complete an additional pad in the Eagle Ford late in 4Q2018, preliminary D&C and infrastructure costs were $175.4 million, above its initial expectations. Carrizo did not include an estimate for 4Q2018 D&C costs in its 3Q2018 investor presentation.

The additional pad in the Eagle Ford “allowed Carrizo to take advantage of the attractive discounts offered by service providers resulting from the industry-wide slowdown in activity,” the company said. “Due to timing, the additional pad did not add any material production to the fourth quarter.”

Carrizo will hold an earnings call to discuss 4Q2018 and the full-year 2018 on Feb. 26 at 10 a.m. CT, and plans to release its financial and operating results after the markets close on Feb. 25.