Service sector spending on carbon capture and storage (CCS) projects is poised to quadruple globally from 2022-2025, driven by favorable policies and investor support, according to new analysis from Rystad Energy. 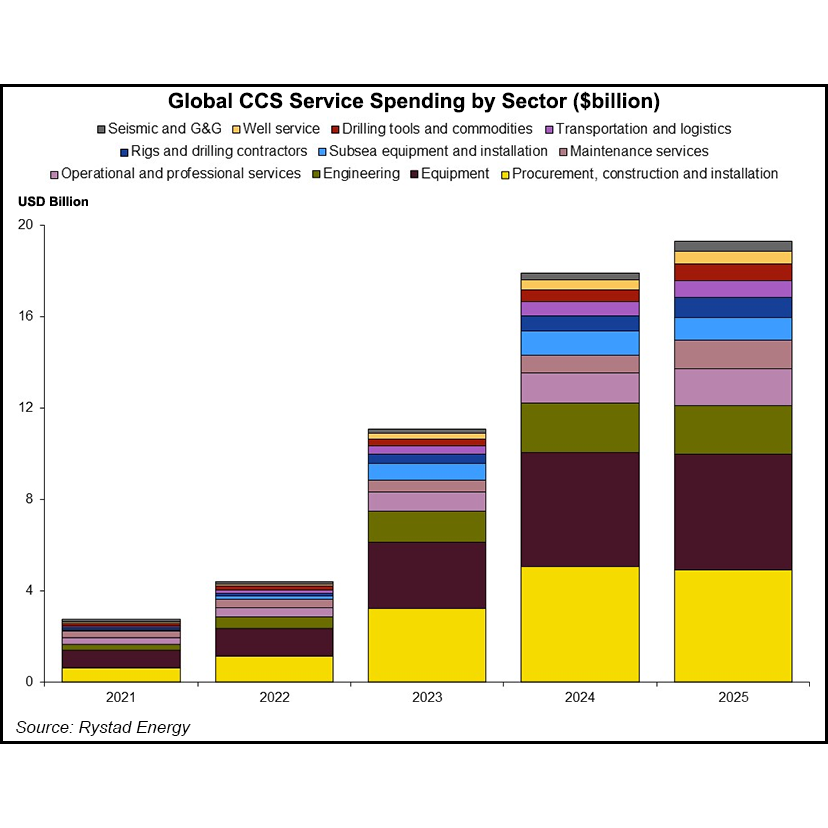 Cumulative spending over the three-year period is forecast to exceed $50 billion, the Oslo-based consultancy said, with North America and Europe accounting for the bulk.

Spending is forecast to total $11 billion in 2023, $18 billion in 2024 and $19 billion in 2025. These figures are based only on projects already announced, and on the assumption that all projects would move forward as planned.

“CCS technology is viewed as a fundamental component of the societal decarbonization required for a successful energy transition,” said Rystad’s Lein Mann Hansen, senior analyst. “Although the technology dates back to the 1970s, the number of CCS project announcements has surged in the last two years, and service sector spending is expected to go through the roof in the coming years as a result.”

Cash is set to be spent “on a broad range of services related to the installation of the capture unit, transportation of the carbon dioxide (CO2) and storage,” the Rystad team said. Researchers cited that 63 of the 84 announced commercial CCS projects slated to begin operation by 2025 are planned for either North America or Europe.

If all projects move ahead as scheduled, Rystad analysts expect a total of 140 CCS plants to be in operation by 2025, capturing at least 150 million metric tons/year (mmty) of CO2. This is up from 56 projects capturing up to 41 mmty currently.

Where Will CCS Spending Go?

Almost two-thirds of the total service spending would be directed to equipping facilities with the CO2 capture component and maintaining operations, according to Rystad projections.

Transportation of CO2, which can occur in gas or liquid form via pipelines, trucks and ships, would require service purchases worth $8.5 billion through 2025, the Rystad team estimated.

The third and final component of most projects is storage, which can take place on land or offshore. The storage process is likely to incur at least $9 billion in service purchases through 2025, the analysts projected.

“The majority of these new additions will stem from Europe and North America, which account for 85% of the service purchases expected through 2025,” researchers said. “The European market will account for more than 50% of the purchases despite having almost the same number of projects in the pipeline as North America.

“This is because many of the new upcoming projects in Europe will store CO2 offshore.”

Researchers explained that, “Offshore storage is more expensive as it requires, for example, laying subsea pipelines for transport using pipelaying vessels, offshore rigs operating at higher rates to drill injection wells, and is coupled with higher labor rates in the region.”

CCS growth in Europe is expected to be fueled by high European Union Emissions Trading System prices, “along with favorable carbon policies and support for CCS projects,” researchers said. “The North American CCS landscape is continuing to gain momentum with multiple projects announced in the U.S. and Canada, driven by national incentives and funds supporting the technology.”

One of those projects is a direct air capture (DAC) facility under development in the Permian Basin by Occidental Petroleum Corp., better known as Oxy, through its Oxy Low Carbon Ventures (OCLV) unit.

OCLV subsidiary 1PointFive Inc. last week announced the sale of 400,000 metric tons of carbon removal credits from the Permian DAC project to multinational aerospace firm Airbus SE. Under the agreement, Airbus has pre-purchased the capture and permanent sequestration of 100,000 metric tons of CO2 /year from the atmosphere for four years, with an option to secure more volumes in the future.

The agreement with Airbus represents “an enormous opportunity to help the aviation industry and other hard-to-abate sectors decarbonize,” said 1PointFive CEO Michael Avery. “Direct air capture will be a scalable, practical solution that aerospace pioneers like Airbus can integrate into their decarbonization roadmaps to contribute to climate action.”

Construction of the Permian DAC facility is slated to begin in the second half of 2022. Once operational, Oxy expects it to be the world’s largest DAC facility, with a 1 mmty removal volume capacity.

Meanwhile, Gulf of Mexico oil producer Talos Energy Inc. has executed a lease with the Texas General Land Office (GLO) for the Bayou Bend  CCS LLC project offshore Jefferson County, TX, southeast of Houston. The project, a joint venture with Carbonvert Inc., would be the first ever major offshore carbon sequestration site in the United States, according to Talos.

The lease comprises more than 40,000 acres adjacent to the Beaumont and Port Arthur industrial corridor, with estimated sequestration capacity of 225-275 mmt of CO2.

“In the coming months we hope to identify anchor industrial partners for the Bayou Bend CCS project as well as a midstream transportation solution in the region,” said Talos CEO Timothy Duncan. “Our bid for the large-scale permanent sequestration site was selected from a highly competitive process in August last year.”

Bayou Bend is one of multiple CCS projects that Talos is pursuing along the Gulf Coast.

What CCS Projects Are Planned By Denbury?

“These agreements further cement Denbury’s position as the definitive leader in CCUS, and we are continuing to advance negotiations with multiple industrial partners whose captured emissions would be stored in these sites,” CEO Chris Kendall said.

Two of the agreements cover a contiguous area of 84,000 acres about 30 miles southeast of New Orleans, which could provide more than 500 mmt of potential CO2 sequestration capacity, Denbury said. The Plano, TX-based independent plans to initially connect emissions from nearby industrial facilities to this site, with future plans for a pipeline connection to its Green Pipeline in Donaldsonville, LA.

The company also executed a pore space agreement adjacent to the acreage leased near Donaldsonville. It would expand the potential volume of CO2 that could be sequestered at the combined site to more than 220 mmt, a 50% expansion to the original site. The combined 11,000-acre site is less than 10 miles from Denbury’s existing CO2 pipeline infrastructure.