Canadian utilities are starting trials of green uses for a natural gas substitute, hydrogen, that has to date chiefly served the Alberta oilsands production often criticized by environmentalists. 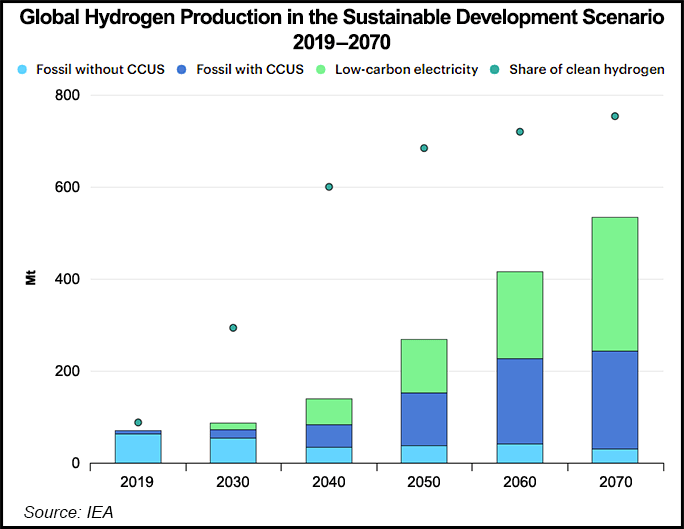 In the 2021-22 heating season, household blends of hydrogen and gas are scheduled to enter field tests in Ontario and Alberta residential fuel markets. A Quebec variation would employ hydrogen to extract ethanol and methanol from landfill sites.

Enbridge Gas Inc. and Cummins Inc. are planning a C$5.2 million ($4 million) experiment in Ontario that would serve a 3,600-customer segment of the distribution grid in the Markham suburb of Toronto with a 2% hydrogen blend.

Another test in Alberta by Atco Gas would give a 5% hydrogen blend a trial run in a 5,000-home neighborhood northeast of Edmonton in Fort Saskatchewan, with a C$2.8 million ($2 million) provincial government grant covering half the cost.

In addition, Gas distributor FortisBC in British Columbia has commissioned a C$500,000 ($375,000) engineering study of reducing greenhouse gas emissions by supplying customers with West Coast versions of the Ontario and Alberta hydrogen blends.

High-volume use of hydrogen to thin and stabilize molasses-like oilsands bitumen supports an economic growth plan by an Edmonton-area coalition of municipal governments, Alberta’s Industrial Heartland. The plan seeks to turn the region into a national and eventually global hydrogen supply and export “node.” The feat would be done by making an improved variety that raises the Alberta product up a notch on an environmental color-code scale, to “blue” from “gray.”

The oilsands additive ranks as gray because the natural gas-fired traditional process for splitting hydrogen from natural gas, known as reforming, results in carbon emissions. The blue version would pair reforming with carbon capture and storage technology.

Atco’s experimental household fuel blend obtains hydrogen from natural gas. The Enbridge and Hydro Quebec versions rank at the top of the environmental scale, as “green,” by splitting hydrogen from water with high-powered electrical current.

In announcing their green fuel trials, the utility companies voiced optimism that they are embarking on a new-age energy transition with great growth potential.

“This low-carbon hydrogen blending project is the first of its kind in North America and is an important step in greening the gas supply that millions of Ontario homeowners and businesses depend on to heat their homes and energize industry,” said Enbridge.

Atco management said its project “is an important first step for Alberta, which has all the ingredients needed to be a leader in the hydrogen economy, including the ability to produce near zero-emissions hydrogen at a lower cost than virtually any other jurisdiction in the world.”

Meanwhile, the power produced by Hydro-Québec is over 99% “clean” because of the Quebec utility’s fleet of more than 60 hydroelectric generating stations, with a total output of 36,700 MW. “This puts Québec in a prime position to take on a leading role in the production of green hydrogen,” according to the utility.

A federal government report issued in December, “Hydrogen Strategy for Canada: A Call to Action,” noted technical and economic hurdles. The 141-page report pointed out that hydrogen and natural gas are not completely interchangeable. The low-hydrogen fuel blends resulted from engineering reviews of effects on pipelines and home appliances. The field tests exclude industrial energy consumers that use sensitive heat processes.

“At any pressure, the volumetric energy density of hydrogen is about one-third that of natural gas,” said the report’s authors. “Delivering the same amounts of energy to users would therefore necessitate increased volumetric flows.”

“Hydrogen is not yet cost-competitive compared to conventional fuel options. For example, hydrogen used as a carbon-free heating fuel is about five times more expensive than natural gas,” the authors said.