A report by a veteran Canadian engineering firm in support of a liquefied natural gas (LNG) export terminal on the British Columbia coast has come up with some astronomical early estimates of shale gas resources in just five of the 50 identified shale basins in Canada. 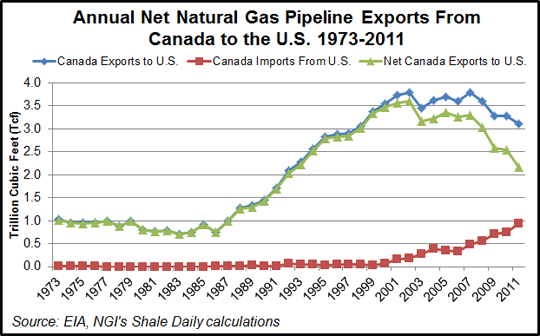 As the oldest and still one of the biggest Canadian petroleum engineering and geology consulting firms, Sproule takes care to err on the conservative side of supply estimates done to support an LNG Canada export license application to the National Energy Board (NEB).

The educated guesses for gas production potential count only five of up to 50 shale gas formations described in a national catalog collected by the Geological Survey of Canada (GSC). The most complete figures come from just three areas: the Horn River, Cordova and Liard geological basins near BC’s top boundary with the Yukon and Northwest Territories.

From these Sproule comes up with a Western Canadian resource base of between 809 and 2,222 Tcf which could produce between 170 and 435 Tcf of marketable gas. “Given the early stage of development and the relatively limited production data available for each of these plays, a range of outcomes is most appropriate because the level of uncertainty is high,” the report says.

No reliable production or reserve numbers are available for Alberta, the country’s mainstay gas supplier since the 1950s. A provincial counterpart to the GSC, the Alberta Geological Survey (AGS), has been doing studies that will begin to fill the knowledge gap.

A forthcoming AGS report is expected to make possible an earth sciences overview of the full scale of a formation known as the Montney that straddles 60,000 square kilometers (24,000 square miles) of northern Alberta and BC.

The document may also provide the first public, scientific glimpse into an Alberta hotbed of secretive mineral rights buying, exploration drilling and new production: the 120,000-square-kilometer (48,000-square-mile) Duvernay Formation. Financial analysts such as BMO Capital Markets, drawing on sparse corporate disclosures of drilling results and their own arithmetic, predict that the Duvernay will turn out to harbor up to 750 Tcf of liquids-rich gas.

Sproule’s estimates of the gas in just the five best-known BC and Alberta shale formations dwarf even the mammoth volumes being earmarked for Pacific Coast export terminal projects by LNG Canada, B.C. LNG Export Co-operative and the KM LNG team of Apache Canada, EOG Resources Canada and Encana Corp.

The KM LNG and B.C. LNG projects have obtained 20-year export licenses from the NEB for a total of 11 Tcf. LNG Canada has filed an application for a 20-year license for 33 Tcf. The total for tanker export licenses sought by all three northern Pacific Coast projects, 44 Tcf, is equal to nearly two-thirds of the current combined conventional reserves of 69 Tcf officially recognized in Alberta (36 Tcf) and BC (33 Tcf) by provincial government authorities.

Planned daily shipments for the trio of BC tanker terminal projects, after all proposed liquefaction trains are built in stages at Kitimat on the northern Pacific Coast, add up to 4.7 Bcf/d: 3.2 Bcf/d by LNG Canada, 1.3 Bcf/d by KM LNG and 240 MMcf/d by B.C. LNG. The schemes all identify future growth of shale production as their primary supply source.

More tanker export projects are on industry drawing boards, such as a 4.2 Bcf/d package, including a new terminal site farther north at Prince Rupert and an 850-kilometer (525-mile) pipeline, that Spectra Energy Corp. and BG Group plc recently announced intentions to design over the next couple of years (see Daily GPI, Sept. 11).

The project lineup prompted BC Premier Christy Clark to tell an economic conference at the University of Calgary in recent days, “We’ve got pretty big economic fish to fry.” Clark said the emerging LNG terminal project lineup, which is expected to add more entries in the months ahead, adds up to “a very big economic development project in our province. We’ve been focused single-mindedly on bringing it to fruition.”

She called benefits from the environmentally-contested, C$6-billion Northern Gateway proposal (U.S. dollar at par) for an oilsands pipeline from Edmonton to another planned Pacific Coast energy export terminal “chump change” by comparison with LNG potential that she described as “a trillion dollars.”

But the KM LNG group sounded a note of caution when its vice-president, David Calvert, gave a progress report to a parallel Calgary industry conference off the campus where the BC premier spoke.

The business community heard that while Calvert’s project was optimistic enough to start work on clearing the BC construction site for its proposed terminal, this year on international energy markets has taught LNG developers to be wary of growing economic risk.

The overseas tanker trade is becoming more competitive and liable to run into price cutting. Aspiring newcomers among LNG merchants show signs of loosening a formerly tight and highly rewarding link with oil, which was upheld by a tradition of indexed sales contracts. The custom tied overseas prices for LNG to oil and made tanker deliveries fetch far higher prices than gas pipeline shipments across glutted North America.

At least one publicly disclosed overseas contract confirmed a prediction that popped up two years ago in regulatory proceedings before the U.S. Department of Energy’s Office of Oil and Gas Global Security and Supply. California-based Altos Management Partners Inc. made the prediction in a report that Freeport LNG Development LP filed as part of a 2010 export application.

“Our analysis predicts an erosion of oil-parity contracts as world supply of LNG doubles within a decade,” Altos said. “Future European and Asian prices will be set by gas-on-gas competition.”

KM LNG continues to seek oil-linked Asian contracts, saying it is not offering discounts to try beating the Sabine plant’s lower costs as a converted export version of an established import site. The other BC projects and the provincial premier have similar hopes to obtain premium gas prices overseas.