Canadian drilling will stage a modest recovery this year, about one-sixth of the long way back toward the extended activity peak before oil and natural gas prices plunged in mid-2014, according to field service and supply contractors. 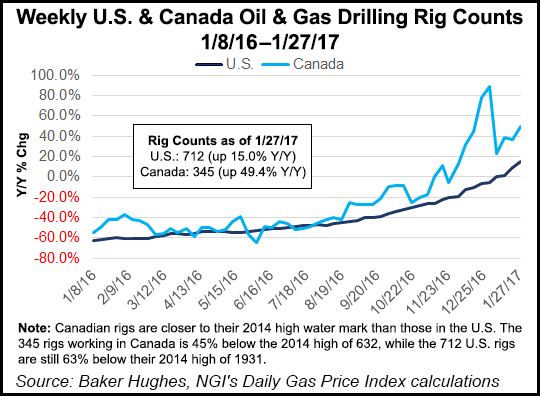 The anticipated activity increase would regain 1,200 of the 7,720 Canadian wells per year lost since 2014. PSAC President Mark Salkeld described the improving outlook as just “some uptick. It took us many years to recover from a similar, but less impactful, downturn in the early 1980s and it will be the same again now.”

For starting the recovery, the association credits Alberta provincial royalty reform as well as firming commodity prices. PSAC expects 2017 averages of US$52.50/bbl for oil and C$3.00/Mcf (US$2.25/Mcf) for natural gas. The revised royalty regime holds rates down to token levels until drilling costs are recovered.

Production results of the partial drilling revival were not forecast. But Statistics Canada, in a monthly gross domestic product update, confirmed that output continues to rise in the northern Alberta oilsands, the biggest and fastest-growing natural gas consumer.

The federal government agency reported total Canadian oil and gas extraction rose 1.3% last November from October. Oilsands production grew by 3.7%, while effects of the 2014-2016 drilling slump continued to be felt in a 0.9% contraction of conventional oil and gas output.