The Transportation Board of Canada (TSB) said it is concerned about a plan by regulators to phase out the use of DOT-111 tank cars for transporting crude oil, suggesting that 2025 isn’t soon enough as it investigates a derailment and fire that occurred this month in Ontario. 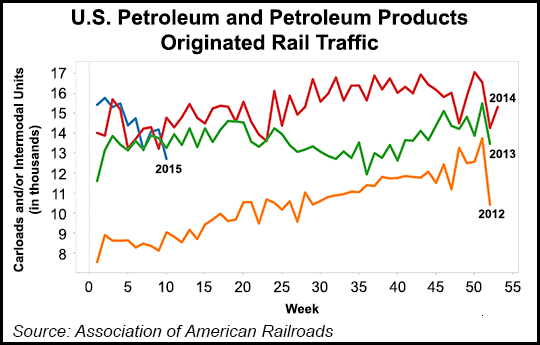 Last week, Transport Canada announced an update of its plans to enact a final rule for higher standards for tank cars that transport flammable liquids (see Shale Daily, March 12; Jan. 14, 2014). The new standard, TC-117, would require that the tank cars be jacketed and thermally protected, and be built with thicker steel, full-head shields, top fitting protection and a bottom outlet valve.

But the TSB said its investigation into a Canadian National Railway (CN) train accident near Gogama, ON, on March 7 revealed that all 39 cars that derailed were DOT-111 tank cars built within the last three years. They were also all built to the industry’s CPC-1232 standard, which has some safety improvements over the original DOT-111 design. According to the TSB, the improvements include half-head shields, improved top and bottom fitting protection and normalized steel.

“Initial impressions are that these [DOT-111] tank cars performed similarly to those involved in the Lac-Megantic accident,” the TSB said Tuesday, in reference to a disaster that occurred in July 2013 in Quebec, when a train carrying Bakken Shale crude oil crashed and exploded, killing 47 people (see Shale Daily, July 9, 2013).

“While the proposed standards [by Transport Canada] look promising, the TSB has concerns about the implementation timeline, given initial observations of the performance of CPC-1232 cars in recent derailments,” the TSB added. “If older tank cars, including the CPC-1232 cars, are not phased out sooner, then the regulator and industry need to take more steps to reduce the risk of derailments or consequences following a derailment carrying flammable liquids.”

According to the TSB, the CN train involved in the March 7 derailment had two locomotives and was hauling 94 DOT-111 tank cars. Several of the cars that derailed leaked oil and ignited, destroying a steel bridge over the Makami River and about 700 feet of track. The fire was extinguished three days later. There were no injuries and no evacuations were required.

“Canadians expect their government to ensure that the risks posed by the transportation of flammable liquids are minimized to the greatest extent possible,” said TSB Chairman Kathy Fox. “I am reiterating my concern expressed in letters I sent to both the minister of Transport and the acting administrator of the [U.S.] Pipeline and Hazardous Materials Safety Administration [PHMSA] in October 2014, in which I urged Transport Canada and its U.S. counterparts to adopt the highest possible standards for tank cars carrying flammable liquids, and replace or retrofit existing tank cars as soon as practicable so that they meet new standards.”

Officials in Canada and the United States have both called for DOT-111 tank cars to be removed from service for transporting flammable liquids due to dangerous design flaws (see Shale Daily, July 25, 2013). Discussions between the two countries are reportedly ongoing.

The timeline also calls for phasing out CPC-1232 tank cars. Nonjacketed CPC-1232 cars would be barred from transporting crude oil and ethanol after July 1, 2023. Transport Canada has proposed banning four types of cars — jacketed CPC-1232 cars in crude oil service, all remaining jacketed and nonjacketed DOT-111 cars, and all CPC-1232 tank cars — from transporting crude oil, ethanol and all remaining flammable liquids (PG I, II and III) by May 1, 2025.

Earlier this month, a 105-car BNSF Railway Co. train loaded with Bakken crude derailed and caught fire near Galena, IL. In February, a 109-car CSX Corp. train derailed and burned in southern West Virginia (see Shale Daily, March 6; Feb. 17). All of the tank cars in both incidents were CPC-1232.