Canada’s growth customer for natural gas made a long stride forward Thursday, when the National Energy Board (NEB) approved a 590,000 b/d pipeline expansion for oilsands exports to Asia. 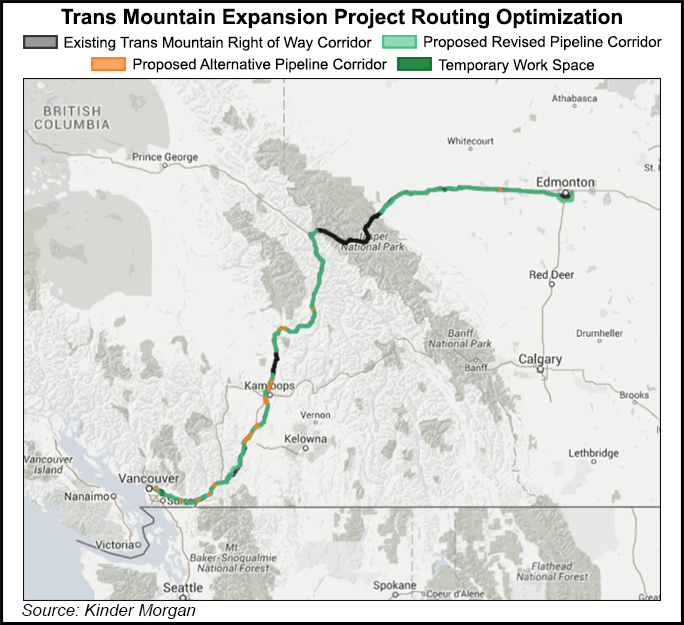 The ruling in favor of the US$5.5 billion addition to Kinder Morgan Canada’s 63-year-old Trans Mountain Pipeline signaled a historic turn away from Canadian reliance on land routes into the United States.

The increase in the line’s total capacity to 890,000 b/d and the new focus on overseas sales are forecast to raise oil revenues by C$73.5 billion (US$56 billion) over 20 years — and gas producers are expected to share in the gains.

Use of gas as fuel by thermal oilsands complexes and their power plants will rise 70% to 3.9 Bcf/d from 2.3 Bcf/d, the Alberta Energy Regulator said in the newly issued 2016 edition of its annual provincial reserves inventory and forecast.

The NEB decision accepted predictions that oilsands output will keep on climbing, as foreseen by an array of industry and provincial agencies that disagree only on the pace of increase and not on the eventual outcome.

The project sponsors expect total Canadian output of all crude types to climb to 6.9 million b/d from 4 million b/d in 2015. Shale and tight oil are forecast to play a role. But oilsands will be the star performer, doubling to 4.8 million b/d from the 2015 average of 2.4 million b/d.

The NEB tacked 157 safety, engineering, environmental and financial conditions onto the Trans Mountain approval. But the board rejected environmentalist demands to scrap the oil expansion on grounds that fossil fuels are flickering out and a new green energy era is at hand.

“Regarding the evidence and argument of some parties that there is no need for the project because of likely future competition from wind, solar and other renewable energy, the board finds such positions were not supported by credible evidence,” the ruling said.

“Renewable energy will be increasingly important in the years ahead. However…world demand for oil is likely to continue to increase over the next 20 years. It is possible there could be some modifications in policies around the world. However, this is not expected to materially change the continued global dependence on oil.”

Rather than theories about the future of carbon-based fuels as determined by as yet unknown global economic policies, the Canadian test of need for a pipeline is still the market for transportation services. The Trans Mountain capacity addition is supported by 15- to 20-year delivery contracts with 13 major oil producers, the NEB said.

The increased traffic on the line’s 1,180-kilometer (732-mile) route to a Pacific Coast tanker dock at Vancouver from the Alberta capital of Edmonton is aimed primarily at China, Japan, South Korea and Taiwan.

Forecast producer revenue gains are credited to anticipated reduction of price discounting on glutted northern U.S. markets for Canadian oil — a commercial headache known as the “bitumen bubble” – as well as to growth in overall sales volumes.

The project still has to go through a Canadian counterpart to the U.S. political resistance that industry blamed for Obama’s decision. The Trans Mountain expansion will go through the first run of a formal arena that the fledgling Liberal government in Ottawa has created to review larger, more ideological aboriginal and environmental objections to energy schemes than the law court-like NEB has a mandate to handle.

A tribunal of specialists, especially steeped in native rights and culture, has been appointed, directed to hold a review and hearings across Canada, and report by November to the federal cabinet, which must ratify NEB rulings to put them into force.