Rising shale gas supplies from the eastern United States took Ontario and Quebec by storm before a pipeline toll overhaul put domestic Canadian production back into contention to keep at least part of its former market share with mainstay natural gas customers. 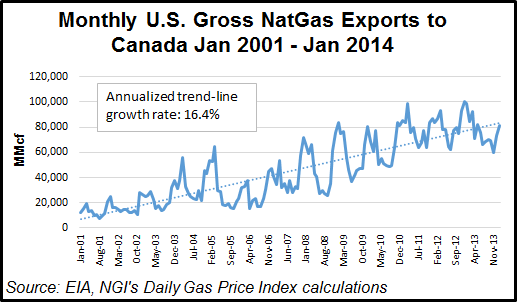 By doubling since 2007 to about 2.5 Bcf/d, U.S. northbound exports gained a 75% share of the 3.3 Bcf/d central Canadian gas market, according to a review by the National Energy Board (NEB) titled “Canadian Energy Dynamics 2013.”

The NEB agrees with a trade scorecard kept by the U.S. Department of Energy’s Division of Natural Gas Regulatory Activities and adds Canadian explanations for the startling numbers. The record shows U.S. exporters more than turned the tables on their Canadian counterparts when the score is kept as market share, as opposed to gross sales volumes.

Even at the 2008 peak of southbound pipeline deliveries across the border, at about 3.8 Tcf per year, Canadian exports were just 16% of the total U.S. gas market. As of 2013, annual northbound U.S. pipeline exports of about 1 Tcf approach one-quarter of the overall Canadian market, including rapidly growing consumption by thermal oilsands extraction projects in northern Alberta.

Western industrial consumption and depletion of aging conventional reserves are only partial explanations for the trade about-face. A pivotal role was also played by steeply rising tolls on TransCanada Corp.’s half-century-old gas Mainline from Alberta to Ontario, Quebec and eastern border crossings into the United States.

By 2012, the NEB said the Mainline’s benchmark long-distance toll across Canada was C$2.02/gigajoule (GJ) (US$1.93/MMBtu) — double the rate five years earlier, largely due to shippers bearing costs of growing excess capacity in the national right-of-way.

After a marathon of hotly contested hearings on proposals for Mainline finance and service restructuring, the NEB enacted a formula that cut the long-distance benchmark to C$1.42/GJ (US$1.36/MMBtu) as of mid-2013 (see Daily GPI, Sept. 16, 2013).

NEB records agree with the U.S. Department of Energy’s latest quarterly gas trade scorecard, which showed the rate of northbound U.S. shale supply exports into Canada was slowing as of July through September last year. “Since August 2013, the volume of gas destined for eastern markets on the Mainline has increased steadily,” NEB said. “In December, about 24% of Western Canadian Sedimentary Basin gas moved east on the Mainline — the highest level in almost three years.”

But the partial recovery of eastbound flows to 3.2 Bcf/d still left the Mainline running at only about half of its capacity. Ontario and Quebec gas buyers kept on showing a taste for competitive shale gas from the United States.

Provincial utility commissioners kept on encouraging consumers to diversify supply sources beyond old Alberta mainstays. Pipeline plans — including a settlement now under review by the NEB on facilities additions and tolls by TransCanada, Union Gas and Enbridge Gas in Ontario, and Gaz Metro in Quebec — focus on raising import capacity.

Changes in pipeline flows over the past 18 months included a historic about-face that added a new central Canadian import route to the long-standing northbound conduit from Michigan under the St. Clair River to the Dawn storage and trading hub near Sarnia, ON.

Known as the Eastern Mainline Expansion, the switch reversed flows in the Niagara Falls region between Ontario and northwestern New York State, which was previously a Canadian export route for half a century.

The board also said preparatory work has continued on a second new northbound route for U.S. shale production: a potential flow reversal of Iroquois Gas Transmission, which has been a Canadian export route to New York, New Jersey and New England since the early 1990s.

At the same time U.S. traders and Canadian industrial consumers are reversing flows of a premium-value gas byproduct. Ethane increasingly flows north into Canada from liquids-rich shale sources in the United States.

“Ethane is a highly valued natural gas liquid in the petrochemical industry, and is a key feedstock for the manufacturing of ethylene. Since 2008, ethane production in the U.S. has grown by 32% and the Canadian petrochemical hubs of Alberta and Sarnia, Ontario are key markets for growing U.S. ethane production,” NEB said.

Construction of the latest addition to the U.S. byproduct export network, Vantage Pipeline, was finished in 2013 and started Bakken Shale ethane deliveries this year of 45,000 b/d from North Dakota to central Alberta petrochemical plants.

In Ontario the Sarnia petrochemical manufacturing hub partially converted raw materials to ethane from oil last year by beginning to use Marcellus Shale liquids from the eastern United States. The trend is scheduled to accelerate in 2017, when Nova Chemicals and Kinder Morgan plan to start service on a new Canadian natural gas liquids import route called Utopia.

Like most Canadian industry and financial analysts, NEB makes no predictions that the cold winter and improved gas prices of 2013-2014 will change market trends enough to make North American gas trade revert to almost exclusively southbound flows into the United States.