Complex procedures are causing pipeline and liquefied natural gas (LNG) project approvals to take more than one year longer in Canada than in the United States, inflating industry costs, according to a new economic comparison survey. 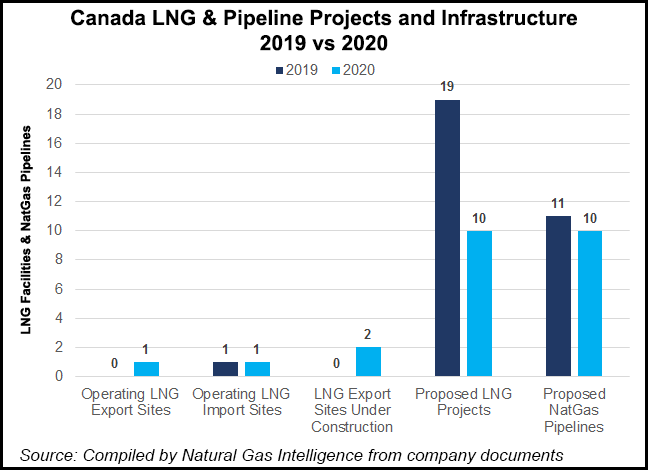 The study by the Canadian Energy Research Institute (CERI) recorded average approval time lags of 13 months for oil or gas pipelines and 19 months for LNG developments.

“The cost of a delay to a project can be as high as 15%,” said researchers. The survey “also highlighted the top of mind issues for industry and government to consider. Uncertainty was the most discussed concern.”
The study follows adoption of hotly contested federal climate change and environmental approval policies since the 2015 election of a Liberal national government. It also comes after a series of pipeline and LNG projects have been scuttled over the past five years.

The policies cited in the report include greenhouse gas emission reduction targets, carbon taxation, reorganization of the National Energy Board into the Canada Energy Regulator, and the creation of the Impact Assessment Agency of Canada.

“The increased uncertainty of the decision-making process in Canada adds to the cost,” said researchers in the report titled Competitiveness of Canada’s Regulatory Framework for the Oil and Gas Sector.

“Risk-based assessments of cost, if higher, add to the profitability hurdle rate for investors,” the report said. “In such a situation, when increased costs are combined with risk, competitiveness is challenged.”

Only industry activities that are too small to attract national government and regulatory attention still escape from the complicated procedures, which cause Canada’s disadvantage in attracting investment compared to the United States.

“For typical day-to-day approvals of routine small-scale onshore oil and gas wells, Canada and the U.S. have similar requirements and similar processes,” researchers said. “For those projects, there is no significant difference in the competitiveness of Canadian and U.S. project approvals demonstrated in our assessments.”