Despite congested pipelines and record U.S. production, Canadian oil exports to the Lower 48 increased 8% to 3.6 million b/d in 2018, according to National Energy Board (NEB) records. 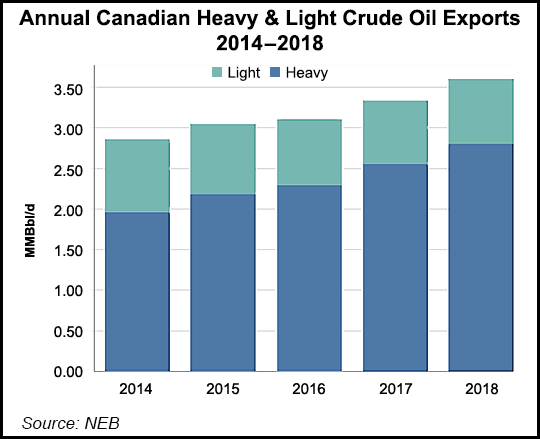 The growth continued a trend of Canada-U.S. oil sales going in the opposite direction of shrinking southbound cross-border natural gas exports from differences between the commodities and their buyers.

Unlike the gas market, an arena of head-on competition to sell production that is interchangeable regardless of source or nationality, the oil trade has more complex economic drivers including variations in quality and processing capability.

“The North American crude oil market has undergone significant change in recent years with the emergence of light crude oil production from shale plays in the U.S.,” the NEB said in a year-end 2018 trade review. “However, the increase in U.S. shale production has not stopped the growth of Canadian crude oil exports.

“The U.S. remains Canada’s main crude oil export market with exports showing steady growth over the past five years. The U.S. refineries have made heavy investments in technology that processes heavy crude, and still prefer heavy crude as a cheaper feedstock.”

Other NEB records show a sharply different performance by natural gas. From a peak of 10.4 Bcf/d in 2002, Canadian gas pipeline sales into the U.S. have fallen 25% to 7.8 Bcf/d. Canadian gas imports from the U.S. have increased from negligible into a range of 2-3 Bcf/d since 2002.

Over the same 17-year period, American oil imports from Canada have increased about 250% from 1.4 million b/d in 2002, according to a trade scorecard from the U.S. Energy Information Administration. The flow from Canada has grown to exceed U.S. imports from the Organization of the Petroleum Exporting Countries (OPEC).

The Canadian oil export growth trend will be interrupted or slowed down this year by OPEC-like production restrictions that Alberta’s left-leaning New Democratic Party government ordered last December to prop up heavy crude prices. A 325,000 b/d cut to the province’s oil production took effect on Jan. 1, but was eased to 250,000 b/d at month’s end.

The extent and duration of the restrictions will depend on the results of a spring Alberta election. Current polls show the less interventionist, right-wing United Conservative Party is favored to win.