Liquefied shale natural gas production from the eastern United States would sail overseas from a terminal on Canada’s Atlantic coast in a scheme presented Thursday to the National Energy Board (NEB). 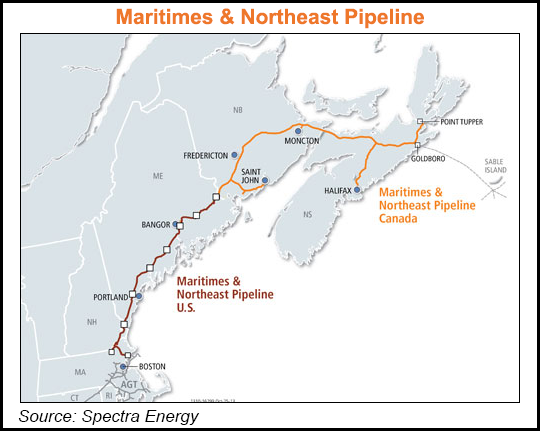 The plan by Goldboro LNG, the 10th liquefied natural gas (LNG) tanker terminal project in the Canadian lineup for long export licenses from the NEB, calls for U.S. gas to fill up to 1 Bcf/d, or 70%, of its proposed capacity of 1.4 Bcf/d.

Reversing flows on Maritimes & Northeast Pipeline (MNP) — to convert the 1,101-kilometer (661-mile) gas highway across Nova Scotia, New Brunswick and New England into a northbound U.S. export route — is described as an essential part of the package.

Growing eastern U.S. supplies from the Marcellus and Utica shales would support the change, according to the trade license application for exports of both Canadian production and imported U.S. output. Goldboro seeks a 20-year permit to ship a total of 7.3 Tcf of gas as LNG via a new terminal projected to cost about C$5 billion to build at the northern end of MNP on the Nova Scotia coast near the provincial capital of Halifax.

Of the total 511 Bcf in annual tanker cargoes sought by Goldboro, the application calls for 365 Bcf to be re-exports of gas imported from the United States.

MNP has made no formal announcements or moves on the flow-reversal proposal, such as an open season capacity auction. But the idea has been gestating in industry and government circles since Goldboro announced its terminal project a year ago. MNP has reported receiving numerous proposals and called the reversal at least technically feasible.

Traffic on MNP has changed radically since the line was built in 1999 for deliveries from the Sable Offshore Energy Project (SOEP) to Nova Scotia, New Brunswick and the New England states, the 134-page survey of market conditions said.

Production from SOEP has fallen to less than 150 MMcf/d from 550 MMcf/d due to natural depletion of the wells offshore of Nova Scotia. While the nearby new Deep Panuke production platform will provide an initial burst of up to 300 MMcf/d, the volume is expected to decline swiftly as low gas prices prevent additional drilling to compensate for rapid drainage of the conventional reservoir, said ICF.

About three-quarters of MNP’s delivery capacity has been taken over by a North American arm of Spain’s Repsol energy empire, which includes Canada’s only LNG import terminal, Canaport in New Brunswick near Saint John. The site is connected to MNP and has potential for conversion to an export point for U.S. production while Repsol marketers rearrange supply portfolios for their U.S. customers, ICF said.

Goldboro’s trade license application to the NEB says, “The dramatic swing for the U.S. Northeast area from a demand market to a supply basin has fundamentally changed the gas industry.”

All concerned on the industry’s supply side stand to gain from developing LNG export services on the Atlantic Coast while an array of U.S. pipeline projects will ensure that U.S. consumers do not suffer, Goldboro said.

In the northeastern states, Marcellus and Utica shale production has brought about “gas prices transformed from some of the highest in the U.S. to prices that are now flat or discounted when compared to most other gas markets in North America,” said Goldboro. “Markets limited by current pipeline access may still see significant price spikes during cold winters; however, with the large number of new pipeline projects planned, these constraints will be eliminated” (see Daily GPI, Sept. 30).

“The low cost of gas production in the U.S., accompanied by lower transportation costs, means it is now uneconomic to produce gas in Atlantic Canada for export into the U.S.,” the NEB filing says. “As a result, new exploration and development in Atlantic Canada can no longer attract investment capital. Given the reserve base in the U.S. Northeast area, this situation will not change for the foreseeable future.”

Alone among Canadian LNG export projects, Goldboro has reported landing a sale for more than half of its proposed capacity. The Nova Scotia project has announced a 20-year agreement to supply 750 MMcf/d to E.ON Global Commodities SE, trading arm of a German gas and power conglomerate (see Daily GPI, June 4).

Meanwhile, on the other side of Canada, export of western Canadian gas via proposed U.S. terminals also is being considered (see Daily GPI, Sept. 23).