As Canadian gas supplies earmarked for liquefied natural gas (LNG) exports keep rising, a Chinese-controlled tanker terminal project is predicting that real deliveries will turn out to be smaller than the numbers on paper permits granted for the trade. 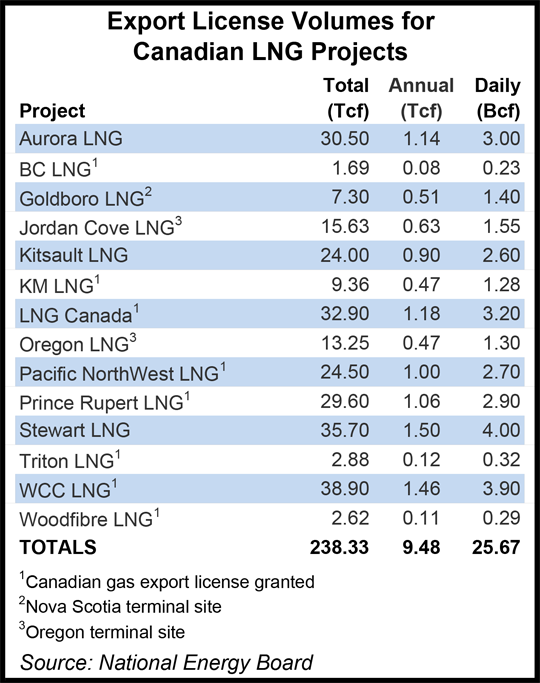 Aurora cited a history, dating back to the 1980s, of long-term trade permits granted by the National Energy Board (NEB) resulting in no deliveries at all. The record includes unused licenses for exports of 15.5 Tcf to the United States.

The failures set precedents of big transactions coming apart at both the supplier and buyer sides of energy markets. The biggest flop — a permit to ship out 9.2 Tcf of arctic gas — resulted from development and pipeline costs. The second-biggest failure — an export license for 4.1 Tcf of Alberta gas — ran afoul of market deregulation in California.

Even when gas flows under Canadian export licenses, the volumes are liable to run well below the maximum allowed, Aurora said after reviewing trade scorecards maintained by the NEB.

“Regarding licenses which were used, their ‘utilization rate’ in the period of gas market deregulation 1986-2012 inclusive was approximately 50% of authorized volumes, implying that as much as 20 Tcf of gas licensed for export during that 27-year period did not flow,” Aurora said.

Aurora’s statements, in an NEB filing, respond to signs that U.S. concerns about effects of large LNG exports on domestic gas supplies and prices are spreading into Canadian regulatory circles. While stopping short of holding an overall inquiry into the trade’s growing potential scale on paper, the board is asking increasingly probing questions during reviews of applications for export licenses.

After more than doubling since 2007 to take a 75% share of eastern Canadian markets, U.S. exports are projected to keep on growing by fulfilling most and possibly all gas demand growth in Ontario and Quebec for the foreseeable future.

As in U.S. producing regions, Canadian forecasts of supplies opened up by horizontal drilling and hydraulic fracturing into shale deposits in British Columbia and Alberta rate their resource endowment as virtually unlimited in the hundreds of trillion cubic feet.

As of this spring, 14 Canadian LNG terminal projects that have advanced far enough to seek export licenses earmark 238.3 Tcf for overseas tanker shipments over a quarter-century after deliveries begin. The total is about triple the current combined established reserves of 68 Tcf in Alberta and British Columbia (BC), which are still chiefly in conventional flowing geological formations tapped with previous generations of technology.

If all 14 Canadian LNG projects were built in their planned stages up to their intended full capacity, overseas shipments would swell to 25.7 Bcf/d, or nearly double the nation’s current total production of 14 Bcf/d.

Eleven of the Canadian terminal proposals are on the Pacific Coast of BC. Two have sites on the Oregon coast for loading up tankers with gas initially imported into the U.S. from BC. One has an Atlantic Coast location in Nova Scotia and plans to draw at least part of its supplies from eastern U.S. shale production.

The latest entry into the lineup spreads planned LNG activity to a former gold and copper mining boomtown within sight of environmentally sensitive territory on the southern end of the Alaska Panhandle.

Stewart LNG, named after the old northern BC border town, has a site at Canada’s most northerly ice-free port across a narrow but deep Pacific inlet from Alaska’s Misty Fiords National Park. A harbor expansion is under way for reviving ore and freight traffic from the Yukon and BC.

Owned by BC-registered Canada Stewart Energy Group Ltd., a private firm that makes its few disclosures bilingually in Chinese and English, Stewart LNG laid out plans to start exports small with a floating terminal but grow to a four Bcf/d giant by adding five processing trains on land.

Canada Stewart said energy groups have been lined up in two Chinese cities as customers, but it does not name them. Supply sources are also not identified. Nor is a prospective builder for an 800-kilometer (500-mile) pipeline that the firm acknowledges would be required to deliver gas to its terminal site from northern shale production fields.

None of the projects have reached the stage of committing to construction or set firm completion dates. All are hunting for overseas customers. Many also seek partners. Pipelines intended to deliver BC and Alberta gas to overseas export terminals remain in early stages of environmental and regulatory review.