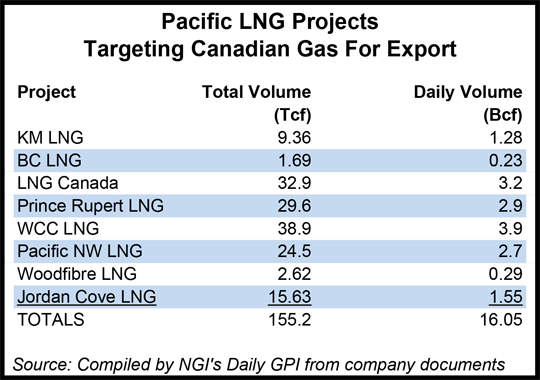 The requests react to temptation to revive bygone federal and provincial supply protection that the Industrial Gas Consumers Association of Alberta (IGCAA) and the Chemistry Industry Association of Canada (CIAC) dangled before the NEB this summer.

IGCAA and CIAC said that while they do not single out for rejection any of the contenders to date for 20- to 25-year LNG export licenses, an assessment should be done of their total supply commitment to foreign consumers.

IGCAA represents Canada’s fastest-growing source of gas demand as the voice of expanding industrial operations that currently use about 2 Bcf/d. CIAC members, chiefly in petrochemical manufacturing, use about 18% of the nation’s gas production. Their concerns about exports are similar to those voiced by the petrochemical industry in the United States (see Daily GPI, March 12).

The Canadian consumers are asking for the impossible, the NEB has been told by Pacific NorthWest LNG Ltd., a partnership of Malaysia’s state-owned Petroleum Nasional Berhad (Petronas) and Japan Petroleum Exploration Co. (Japex). “This submission has no apparent regulatory purpose,” said Pacific NorthWest in a filing with the NEB in response to the requests for an overall assessment of the LNG lineup by the Canadian gas consumers.

“It would require confident forecasting, over a term reaching to mid-century, of such variables as Canadian natural gas production, imports, domestic demand and exports, both by pipeline and in the form of LNG. This is simply not feasible.”

The NEB should stick to the “market-based procedure” that replaced previous generations of federal and provincial regulation in 1987, agreed WCC LNG, a partnership of ExxonMobil and its 70%-owned Canadian affiliate, Imperial Oil.

The old regime enforced a “surplus test” that ordered Canadian gas suppliers to maintain a collective stockpile big enough to cover up to 30 years of projected total domestic demand as a condition of permission to make export sales. The requirement generated libraries of forecasts and marathon public hearings on industry and consumer expectations.

The market-based regime adopted in 1987 retains a legislated NEB mandate to ensure that exports are surplus to Canadian needs, but only interferes with the trade if domestic consumers prove they are denied supplies at fair prices by international standards. The changed standard put a full stop to the old, recurring, formal regulatory debates over long-range gas supply and demand.

The market approach to export regulation has worked well for a quarter-century, and no evidence has turned up to suggest it should be discarded in any of the current crop of LNG export license cases before the NEB, say Pacific NorthWest and WCC.

Pacific NorthWest adds, “The board consistently draws attention in its own energy work” — ranging from periodic two-year gas outlook reports to long-range energy futures projections — “to the uncertainties which all forecasters face.”

Not the least of the current unknowns is which entries in the lineup to build LNG export terminals on the northern Pacific Coast of British Columbia (BC) will eventually be built and start loading Asia-bound tankers. None have secured sales contracts in their declared target markets in Japan, South Korea, China and Taiwan.

None of the Canadian LNG export projects have set firm dates for construction or operational startup. But all have set their sights on high sales volumes, with supplies forecast to primarily come from as yet mostly untapped shale deposits in northern BC and Alberta.

The cumulative total of supplies earmarked for export in NEB license applications comes from Jordan Cove LNG LP, adds a new twist, with Calgary-based owner Veresen Inc. seeking to ship out BC and Alberta gas from a terminal proposed for a site in the United States on the Pacific Coast of Oregon (see Daily GPI, Sept. 24).

Pacific NorthWest warns the NEB that while global and Canadian market outcomes are unpredictable, it is a good bet that reviving the old restrictive regulatory regime would hurt projects that deserve to go ahead.

Still more projects are understood to be in earlier stages of development and expected to step forward by declaring their targets in additional export license applications to the NEB. TransCanada Corp. and Spectra Energy (Westcoast) have started environmental review proceedings on multibillion-dollar pipeline projects from prospective shale development regions in northeastern BC across the province to proposed Pacific Coast terminal sites at Kitimat and Prince Rupert.