Canadian natural gas supplies will still last a century if all proposals for new tanker shipments to Asia succeed, the National Energy Board (NEB) has been assured. 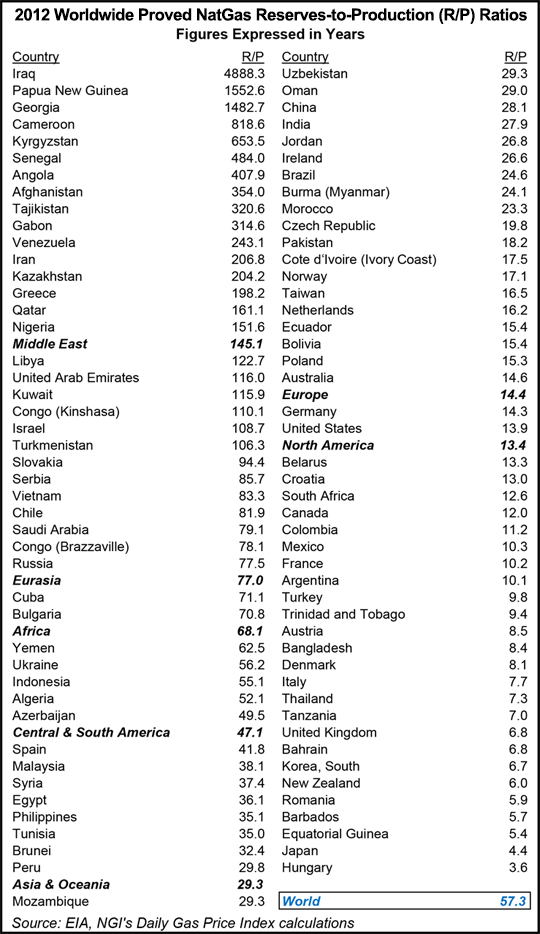 Not even the biggest liquefied natural gas (LNG) export scheme devised to date will shrink the stockpile enough to drive prices fetched by Canadian gas up to more than C$7/MMBtu (US$6.30/MMBtu), according to a report by Navigant Consulting Inc.

Steelhead LNG commissioned and filed the study to support applications for NEB licenses to ship out 45 Tcf at a rate of 4.5 Bcf/d for 25 years from a planned network of five plants on Vancouver Island.

“There is simply a huge abundance of natural gas to serve Canadian needs for hundreds of years, actually a considerably longer resource life than in the U.S.,” said the report, which is based on a review of the latest estimates by the NEB and the U.S. Energy Information Administration. Navigant’s analysis was accepted by the NEB in favorable rulings on other gas export license applications that relied on its earlier versions of its report for support.

The count of Canadian supplies rated as recoverable, using currently known technology, stands at an astronomical 1,444 Tcf. Canadian gas consumption is only about 3.6 Tcf per year, and will still be just 7.2 Tcf annually after a projected doubling over the next three decades.

As of this week the moving target of total volumes sought by LNG export schemes before the NEB, now up to 17 projects, stands at 287 Tcf over the next 25 years, with potential to ship overseas 30 Bcf/d if all go ahead. The most Canada has ever produced to date, for its own needs and exports to the U.S., was 17.5 Bcf/d in 2001.

Most of the stockpile of recoverable Canadian gas awaits development in 82,000 square miles of all but untapped shale and tight geological formations available for horizontal drilling and hydraulic fracturing in British Columbia and Alberta.

Even the current forecasts of vast supplies will turn out to err on the conservative side if the industry and government authorities continue a pattern of supply estimating that has prevailed since the onset of the shale development revolution in 2007.

“Not only are entirely new gas resource plays being discovered, and then brought into production,” said Navigant, “as additional data from producing gas plays is obtained over time, the resource estimates of those active plays have generally ended up being raised in an ongoing series of increases.”

The potential for increases in Canadian supplies rated as recoverable shows up dramatically in an estimate of Alberta’s endowment of total “in-place” shale resources, when added up without reference to technical capabilities or economic conditions.

An appraisal group in the Alberta Energy Regulator (AER) has calculated that total volumes embedded in only the province’s five shale deposits with “immediate potential” for development are colossal: 3,424 Tcf of gas, 58.6 billion bbl of gas-liquids byproducts, and 423.6 billion bbl of oil.

Even the immense current estimates of the province’s total resource endowment could eventually turn out to be conservative, said the appraisal group, which was formerly separate as the Alberta Geological Survey.

“In Alberta no less than 15 formations have the potential for shale- or siltstone-hosted hydrocarbons,” said the AER appraisal group. “Estimates for the total amount of gas in Alberta shale vary widely from 80 to more than 10,000 Tcf.”

But the attention of Alberta producers has remained riveted on oil and liquid byproducts since the AER released its shale resource appraisal about two years ago. BC has no counterpart to the Alberta’s oil sands or concentrations of liquids-rich shale deposits.

Navigant, echoing industry and government forecasters, predicts BC will take over from Alberta as Canada’s top gas-producing jurisdiction.

Recoverable reserves are far greater than proved reserves, so the proved reserves figure, as measured by the industry standard reserves to production (R/P) ratio, doesn’t tell the whole story, according to Patrick Rau, Natural Gas Intelligence director of strategy and research.

“In 2012, the most recent year with available data, Canada’s R/P ratio (calculated by dividing 2012 proved reserves by 2012 production) was just 12 years, a far cry from the hundred or so years Navigant estimated in its report,” Rau said. “The 12-year figure makes Canada one of the lowest-ranking countries in the world, even behind the United States, which sits just below 14 years.

“However, it is very likely that much of those recoverable reserves will in fact become proved reserves over time, so Canada has far more than 12 years of gas left to produce.”