While hanging on to a good amount of acreage in two counties in the Williston Basin in North Dakota, Calgary-based Crescent Point Energy Corp. has found better economics for oil and natural gas production on the Canadian side of the border for the prolific basin that spreads over portions of Saskatchewan, Manitoba, Montana and most of the western half of North Dakota. 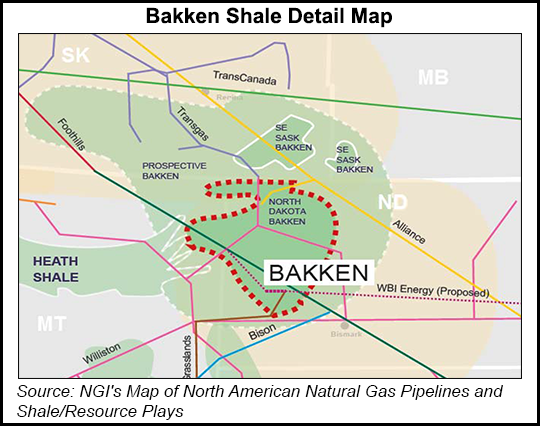 With the recent acquisition of Viking oil and gas assets in Saskatchewan from privately held Polar Star Canadian Oil and Gas Inc., Crescent Point obtained another 2,800 b/d of capacity in the Dodsland area on the Canadian side of the border. With those added assets, Crescent executives indicated the company is focused on increasing its drilling and completion work on both sides of the U.S.-Canada border.

For this year, Crescent Point has increased its overall production estimate to 135,500 boe/d. The company’s 2014 exit production rate may be up to 148,000 boe/d, according to a spokesperson, who noted that company funds flowing from operations this year should hit $2.45 billion.

Although the bulk of its production from the Bakken comes from the Canadian side, Crescent has been identified as the leading company in terms of the number of new drilling permits (216) it submitted to the North Dakota Industrial Commission this month, followed by Hess (113) and others with infill applications, such as Marathon Oil Co. and Newfield Exploration Co.

Calgary-based Crescent spokesperson Rob Willson clarified that activity in an interview with NGI‘s Shale Daily on Monday, reiterating that the economics favor development on the Canadian side of the border in terms of much lower drilling costs and royalty payments.

“We do have a fair amount of land in North Dakota in McKenzie and Divide Counties, however, that is not a hot spot for our company right now,” Willson said. “The economics of North Dakota are not anywhere close to what we’re seeing in Saskatchewan.

“We like North Dakota, but the royalty costs and well completion costs are astronomical compared to other places.”

In Divide County, Crescent has wells located at the Canadian border, and Willson said for a two-mile horizontally drilled well, it would cost roughly $7.5 million, plus royalties of about 30%. “In Canada, that exact same well — literally a mile away on the Canadian side — with the same depth, same lateral, would cost us $4.3 million to drill and complete with a 100,000 bbl royalty holiday,” he said, adding that when a royalty is eventually paid it is 18%.

Under these conditions, its doesn’t make sense for Crescent to deploy a lot of capital in North Dakota, Willson said. The reason for the current spate of permits — in which Crescent mostly holds small 5% minority interests — is that they are tied to leases that will expire soon if there isn’t some drilling activity at the sites.

In the U.S. Bakken, the plays are much deeper and the oil is in place in the rock where it was created; in the Canadian Bakken the resource has migrated northward from North Dakota and is consequently not as firmly embedded in the rock and it is much shallower, Willson said.

“In North Dakota, you are drilling into the source rock, but where we are in Saskatchewan, the supplies are only about one mile deep and the porosity and permeability tightens to the north, so this oil has migrated all the way up from North Dakota, and it is basically trapped in Saskatchewan.”

In Canada there is no need for 1.5- to 2-mile vertical drilling just to start the horizontal lateral. “You go one mile down and horizontal for one mile; that’s all,” Willson said. “As a result, these are more like conventional wells and we’re getting rates of return on some individual wells at 1,000%, and there are hundreds and hundreds of wells that pay out in a few months.”

Crescent Point is focused mainly on the Viewfield Bakken in southeast Saskatchewan, just over the border from North Dakota; the Shaunavon play in southwest Saskatchewan, just above Montana; and the Uinta Basin in Utah. Crescent owns about 80% of the Viewfield Bakken play, Willson said. In all three areas, longer term Crescent’s plans call for waterflood enhanced recovery. The smaller plays are in Alberta, Manitoba and North Dakota.

By the end of this year, Crescent estimates that it will have drilled a total of 2,800 horizontal, multi-stage hydraulic fractured wells in all of its play, and almost all of that is in the two Saskatchewan plays, on a portfolio it began building five years ago (see Daily GPI, Aug. 25, 2009).