Canadian Prime Minister Justin Trudeau promised to cooperate with President Biden on climate change even though one of the new president’s first actions was to halt the construction permit for Keystone XL (KXL), the Canada-to-Gulf Coast system. 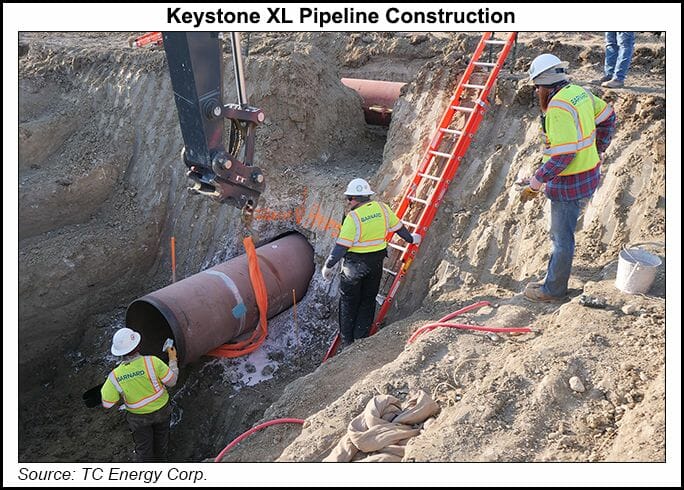 “We are disappointed but acknowledge the president’s decision to fulfill his election campaign promise on Keystone XL,” said Trudeau on Wednesday.

Sponsor TC Energy Corp. on Tuesday halted work on the system because the new president was expected to pull the presidential permit.

Following his inauguration, Biden did, signing a series of executive orders (EO) including one titled “Protecting Public Health and the Environment and Restoring Science to Tackle the Climate Crisis.”

The EO revoked the presidential permit issued by President Trump in March 2019 for KXL. The permit was granted to TC, then TransCanada Corp., allowing the company to “construct, connect, operate and maintain pipeline facilities at the international border of the United States and Canada.”

The Biden administration revoked the permit, an action that was first undertaken in 2015 by the Obama administration following an environmental analysis.

“That analysis, in addition to concluding that the significance of the proposed pipeline for our energy security and economy is limited, stressed that the United States must prioritize the development of a clean energy economy, which will in turn create good jobs,” Biden’s EO stated.

“The analysis further concluded that approval of the proposed pipeline would undermine U.S. climate leadership by undercutting the credibility and influence of the United States in urging other countries to take ambitious climate action.”

Biden noted that climate-related costs have increased over the past four years.

“The world must be put on a sustainable climate pathway to protect Americans and the domestic economy from harmful climate impacts, and to create well-paying union jobs as part of the climate solution,” the EO stated. KXL “disserves” U.S. national interests.

“Our domestic efforts must go hand in hand with U.S. diplomatic engagement. Because most greenhouse gas emissions originate beyond our borders, such engagement is more necessary and urgent than ever. The United States must be in a position to exercise vigorous climate leadership in order to achieve a significant increase in global climate action and put the world on a sustainable climate pathway.

“Leaving the Keystone XL pipeline permit in place would not be consistent with my administration’s economic and climate imperatives,” Biden stated in the EO.

Trudeau said he looked “forward to working with President Biden to reduce pollution, combat climate change, fight Covid-19, create middle-class jobs and build back better by supporting a sustainable economic recovery for everyone.”

Despite canceling the permit, the Liberal prime minister promised cooperation on a wide range of policy fronts to undo legacies of Trump’s tumultuous term.

“Despite President Biden’s decision on the project, we would like to welcome other executive orders made,” Trudeau said. Those EOs would include “the decisions to rejoin the Paris Agreement and the World Health Organization, to place a temporary moratorium on all oil and natural gas leasing activities in the Arctic National Wildlife Refuge, and to reverse the travel ban on several Muslim-majority countries.”

“We will continue to fight for Alberta’s responsible energy industry,” said Alberta’s United Conservative Party (UCP) chief, Premier Jason Kenney. He urged Trudeau to seek a deal that would revive KXL and to retaliate if Biden refuses.

“Failing an agreement with the American government, we call on the government of Canada to respond with consequences for this attack on Canada’s largest industry,” said Kenney. “We are not asking for special treatment, simply the same response that Canada’s government had when other areas of our national economy were under threat from the US government.”

Canceling the construction permit immediately forced out 2,000 people who were employed to build the planned export conduit’s Canadian leg and U.S. pump stations, according to Kenney.

A $1.5 billion ($1.1 billion) Alberta government ownership investment in KXL made the preliminary construction work possible. Critics of Kenney and the UCP accused him of wasting taxpayer money with a bad bet on a high-risk project.

In the United States, North America’s Building Trades Unions (NABTU) echoed Kenney. “Environmental ideologues have now prevailed, and over 1,000 union men and women have been terminated from employment on the project,” said NABTU.

“Our unions support an all of the above energy strategy that supports and grows the middle class and those desperately trying to reach it. Addressing climate change is a priority for all of us, but a truly sustainable future cannot continue to dismiss the economic sustainability of working families.”