An analysis indicates that Canada’s oil production appears to be the most affected by the Covid-19 pandemic and from reduced oil demand, with shut-ins estimated to climb above 1.1 million b/d between April and June. 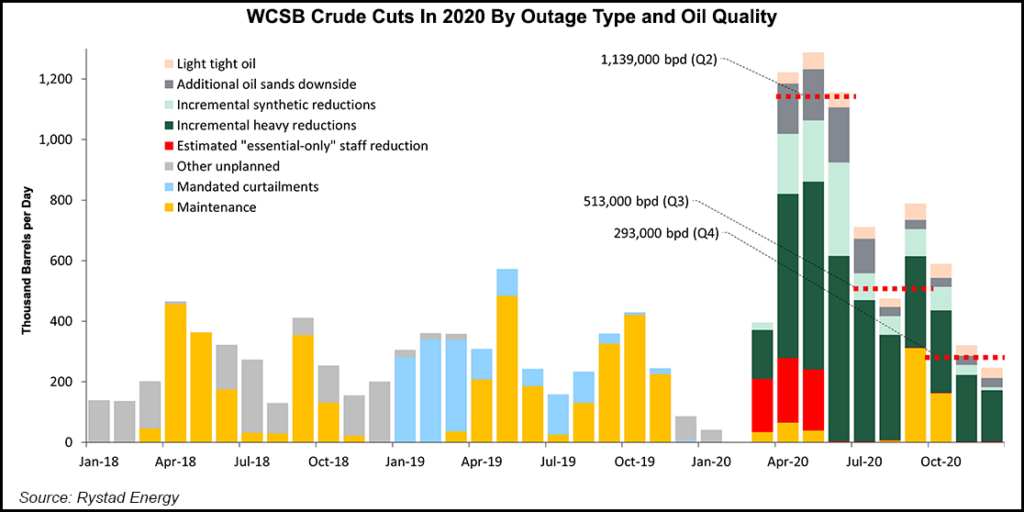 The United States is likely to shutter “hundreds of thousands” of oil barrels but the numbers were not yet official and not included in Rystad’s estimates, which were issued on Thursday.

“Due to the severity of demand destruction in North America in April and May, we estimate that shuttered oilsands and heavy oil curtailments in Western Canada could exceed 1.1 million b/d in the second quarter of 2020, with additional near-term downside risk,“ said Rystad’s senior analyst Thomas Liles. “Our curtailment forecasts for the rest of the year have increased to 513,000 b/d for the third quarter and 293,000 b/d for the fourth quarter.”

Calgary-based Athabasca Oil Corp. earlier this month called the first halt to an entire Canadian bitumen production site in response to depressed prices and the economic contraction caused by the coronavirus. The firm mothballed its Hangingstone operation, shutting in about 9,500 b/d tapped by steam injections from natural gas-fired boilers into a northeastern Alberta oilsands deposit near Fort McMurray.

Midstream operators also have “underscored the strain on storage capacity and the production cuts this has already brought,” Rystad analysts noted. “Recent communication from upstream players has also highlighted the storage conundrum and all but assured deeper near-term cuts.”

An “additional oilsands downside” is a scenario in which mining projects that have not been upgraded, as well as higher-cost thermal projects, would be taken completely offline.

Rystad’s near-term projections for large thermal projects are not as steep as mining because of the need to maintain thermal reservoir integrity and the “technical ease” with which mining projects are able to adjust short-term output. The firm’s current estimates indicate that most of the near-term curtailments would be from mining projects.

“In any case, Western Canada’s chronic lack of storage capacity was guaranteed to emerge as a key constraint on upstream volumes in a low-demand environment,” Liles said. “As with the recent decoupling in light benchmark prices, the experience for Canadian producers will probably remain decoupled” even if there are positives from the meeting held Thursday (April 9) by the Organization of the Petroleum Exporting Countries and its allies “or any other potentially positive news surrounding global near-term supply developments.”