A small handful of cold, hard numbers tells why Canadian shale gas is forced to rely on elusive Asian exports of liquefied natural gas (LNG) to thaw out drilling prospects 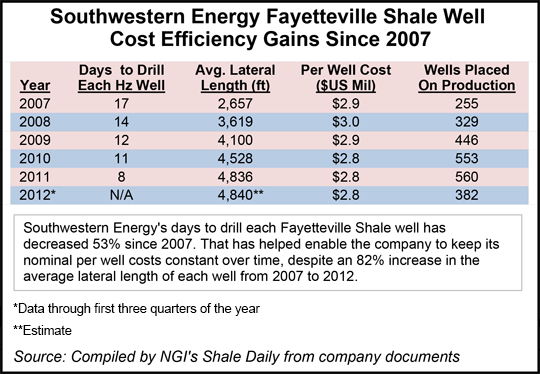 A decision by the National Energy Board (NEB) to reject a northern gas pipeline project, and an industry meeting in Calgary generated figures that showed that even the richest Canadian shale deposit is no match on North American markets for rival sources in the United States.

The projections foresee 20-fold growth of Horn River production into a range of 3.5-4 Bcf/d from its current trial level of 217 MMcf/d.

Fayetteville costs continue to drop as Southwestern gains experience with shale technology and the gas-factory approach developed for its use, Olson said. “Southwestern had a great year, even in a low gas price environment,” she said, anticipating imminent release of the firm’s 2012 annual report.

As of mid-2012, the cost of completed Fayetteville deep, horizontal and hydraulic fracturing wells was down to about US$2.8 million apiece, and initial production jumped to 3.9 MMcf/d from the previous average of 2 MMcf/d, she said in an interview.

The number of days it takes Southwestern to drill each Fayetteville Shale well has decreased 53% since 2007, according to company documents. That has helped enable Southwestern to keep its nominal per well costs constant over time, despite an 82% increase in the average lateral length of each well from 2007 to 2012.

North American competitive gas market conditions make even the NGTL projection that Horn River production will take until 2030 to hit full stride liable to turn out to be overly optimistic, the NEB said.

“The extent and pace of development in the Horn River Basin remains an open question in the near to medium term,” said the board’s verdict on the Komie project, which followed hotly contested hearings in Calgary and Fort Nelson, the nearest community to the deposit near the northern border of BC.

The ruling said, “The board recognizes that some interveners highlighted a number of circumstances — such as low gas prices and competition from other supply basins in North America — that could limit drilling activity and production in the Horn River Basin. The board agrees that these factors could result in near- and medium-term production growth that is slower than contemplated in any of NGTL’s production forecasts.”

The NEB granted agreement to TransCanada-NGTL’s submissions that — compared to other, smaller and nearly as remote Canadian shale gas deposits — “supply costs of the Horn River Basin are low.” However, “its future relative cost compared to other basins remains fairly uncertain given the early stage of development.”

Like the NEB, Olson did not discount the possibility that Canadian specialists at operating in cold, dark regions strewn with insect-infested muskeg swamps and mostly populated by wary aboriginal societies will eventually transplant the mass-production methods of shale development.

The Ozark Mountains foothills and woods of the Fayetteville Shale region were an industry frontier too, Olson said. “When we started, there was nothing there.” Southwestern has opened an exploration office to examine Canadian opportunities.

Southwestern devised programs and sprouted subsidiaries to build up requirements from roads and bridges to service contractors, trained talent and community relations innovations for drilling big, technical wells by the thousands, she said.

“You have to have an attitude that you’re going to do the right thing,” Olson said. The environmental and community relations arts include learning to recycle used hydraulic fracturing water, building ponds to catch rain where new supplies are needed, and making deals to turn the reservoirs over to owners of the property involved for free after industry finishes using them, she said.