During summertime, the rigs come out in Canada. The “frozen north” gained 23 active drilling rigs in the latest census from Baker Hughes Inc., released Friday. That increase was enough to bring North America to a net gain of 17 for the week ending July 17, despite a net decline of six rigs in the United States. 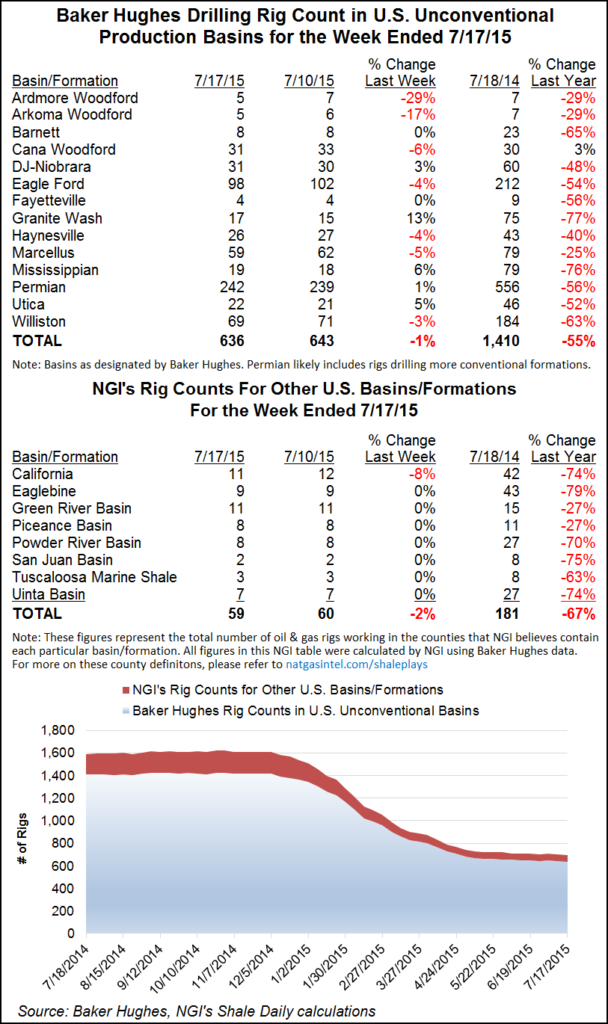 Alberta added 11 rigs, and British Columbia saw its tally increase by 10. Saskatchewan picked up three rigs while the other provinces were static. The majority of the rigs added in Canada, 16, were gas-directed; seven oil-directed rigs were added.

However U.S. drilling rigs were back on the retreat after posting an ever-so-modest gain in the previous count (see Daily GPI, July 10). The U.S. lost seven active oil-directed rigs but gained one active gas-directed rig. Of the net decline of six, three rigs were lost from land and three left the inland waters arena. The offshore category was static.

In the U.S. four each of directional and horizontal rigs were lost, but two vertical rigs were added. In the previous week’s count, it was a strong return by vertical rigs that made for a net gain of one by U.S. rigs.

In the current count, among states Louisiana lost the most rigs, down three, followed by North Dakota, Pennsylvania and Texas, which each lost two. California lost one rig, but Alaska, Colorado, Kansas and New Mexico each gained one.

Among major basins tracked by Baker Hughes, the Eagle Ford gave up four rigs, followed by the Marcellus, which lost three. The Ardmore Woodford, Cana Woodford, and Williston each lost two rigs while the Arkoma Woodford and Haynesville each lost one.

The Permian Basin added three rigs, and the Denver-Julesburg/Niobrara, Mississippian and Utica each added one rig.

“We believe that the North American rig count may now be touching the bottom, and that a slow increase in both land drilling and completion activity could occur in the second half of the year,” said Schlumberger Ltd. CEO Paal Kibsgaard during an earnings conference call (see related story).