Propane exports from Canada to overseas markets jumped by 19% in 2020, with international sales poised to increase again this year, according to the Canada Energy Regulator (CER). 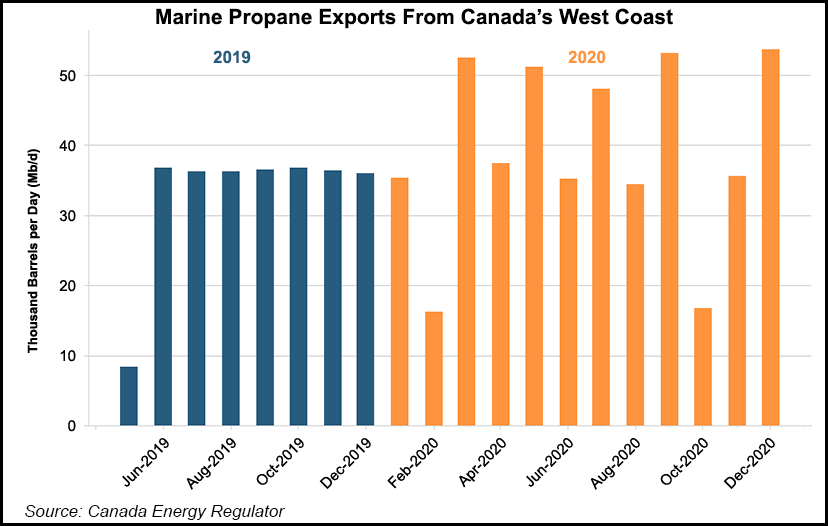 A terminal location on the northern Pacific coast of British Columbia (BC) at Prince Rupert lived up to expectations of giving a competitive advantage to the Alberta-based pioneers of marine propane, AltaGas Ltd. and Vopak Pacific Canada Inc.

“Canadian propane exports will likely compete with U.S. supplies for Asian market share going forward, as U.S. exports of propane to East Asia also grew over much of 2020,” said the CER.

“However, propane marine exports from Canada have some advantages over U.S. exports from the Gulf Coast, including a shorter shipping distance to Japan and no need to ship via the Panama Canal, which can cause delays due to busy ship traffic.”

A lot of the abundant propane supply is secured from the liquids-rich Montney formation, which straddles northern BC and Alberta. Output is expected to grow in part because of liquefied natural gas exports from BC projects under construction, including the Royal Dutch Shell plc-led LNG Canada and the related Coastal GasLink supply pipeline.

All of the Canadian overseas propane exports last year went to Asia, where Japan was the top sales outlet. However, the market shows signs of expanding.

“Growth in 2020 Canadian marine propane exports was driven by greater demand due to cold weather and growing petrochemical feedstock consumption in China,” the CER said. “Marine propane exports also increased to Asian countries as a result of reduced supply from Saudi Arabia, which is a major supplier of propane to Asian markets.”