TransCanada Corp. obtained approval Thursday for a step toward expanding the busy northbound natural gas freeway for imports into Ontario and Quebec from the United States. 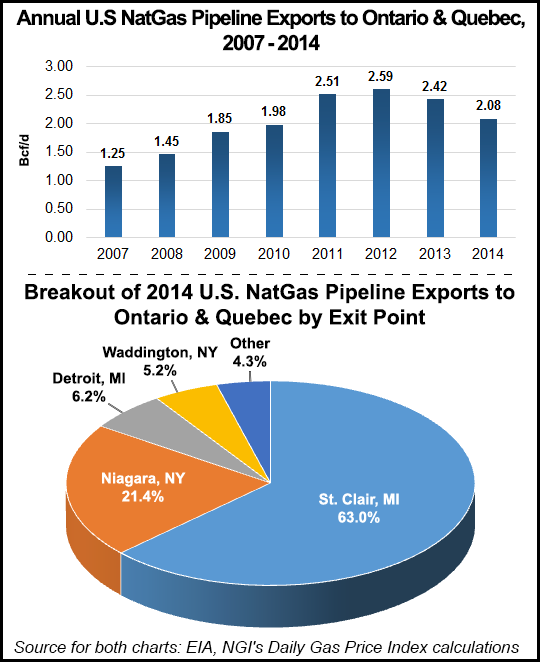 The National Energy Board (NEB) authorized construction of an 11-kilometer (seven-mile) stretch of pipe 36 inches in diameter plus associated hardware that will increase capacity by 345 MMcf/d.

The additional gas flows will reach southern Ontario and Quebec via the Dawn storage and trading hub west of Toronto and border crossings farther east. The project, named King’s North, is part of a C$500 million (US$400 million) facilities package agreed upon nearly two years ago by TransCanada and the country’s three top distribution companies: Enbridge Gas in Toronto, Union Gas (Spectra) in southwestern Ontario and Gaz Metropolitain in Quebec.

The agreed package is intended to enable the distributors to shop around for potentially increasing exports of shale production from the United States, especially as competition for the region’s traditional Western Canadian suppliers led by Alberta.

The King’s North project was uncontested except for some wrangling with municipal authorities over route and safety planning details. A much larger project, intended to compensate for the Energy East proposal for partial conversion of the TransCanada gas Mainline to oil service, was not part of the agreed facilities package and started a fight over allocation of about C$1 billion (US$800 million) in costs. All concerned are seeking a settlement in confidential negotiations.

The NEB postponed releasing formal reasons for the King’s North approval. In a statement thanking the board for swift action, TransCanada president Russ Girling said, “The approval of this project is a great milestone for our southern Ontario facilities expansion plan. We are committed to ensuring that we continue to provide diverse, reliable and economic sources of natural gas.”