Preparations to spread gas and oil exports beyond traditional mainstay markets in the United States rank high on the Canadian government’s legislative agenda for the rest of this year and 2014. 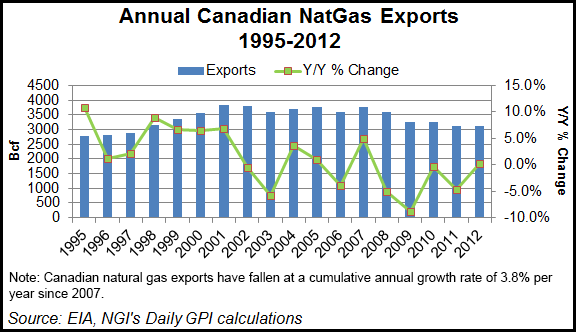 Measures to accommodate increased pipeline, ocean tanker and railway movement of energy commodities figure prominently in the Speech from the Throne that opened a new session of Parliament, which began Thursday.

Prime Minister Stephen Harper highlighted the priority his Conservative government puts on international commerce by skipping the opening House of Commons sitting to fly to Brussels and complete a free trade agreement between Canada and the European Union (EU).

Although negotiations and publicity have dwelled on livestock and cheese, the deal was expected at least to create potential for prying open EU energy markets. While public and political attention has riveted on routes to Asia for liquefied natural gas (LNG) and bitumen, Canadian energy merchants have been quietly exploring European possibilities and courting customers.

Fresh outlets are also sought for growing oilsands output. No deals have been disclosed yet. But Canadian industry and government representatives have repeatedly trekked to European capitals to campaign against green-tinged EU regulatory proposals for penalties against Alberta bitumen as “dirty oil” due to carbon emissions from thermal extraction plants. Canada’s biggest pipeline companies, TransCanada Corp. and Enbridge Inc., are advancing west-to-east oil projects. The total delivery capacity of the schemes is 1.4 million b/d.

Measures sketched out by the Canadian throne speech include strengthened safety, environmental, accident insurance and spill cleanup rules for tanker, rail and pipeline transport of energy commodities. The initiatives are partly intended to encourage public acceptance of increased gas and oil traffic.

No details of new standards were immediately disclosed. Throne speeches outline priority topics of forthcoming action, leaving the particulars to be revealed by legislation and the government budget.

The throne speech, delivered late Wednesday by Governor-General David Johnston at a ceremony in the Canadian Senate, said “Canada’s energy reserves are vast, sufficient to fuel our growing economy and supply international customers for generations to come. However, for Canadians to benefit fully from our natural resources, we must be able to sell them. A lack of key infrastructure threatens to strand these resources at a time when global demand for Canadian energy is soaring.”

The Alberta Geological Survey (AGS), a science arm of the Alberta Energy Regulator (AER, formerly the Energy Resources Conservation Board), delivered a reminder of just how vast the resources are at a fall meeting of the Canadian Society for Unconventional Resources in the industry capital of Calgary (see Daily GPI, Nov. 12, 2012).

“Those numbers are going to get larger,” predicted AGS resource appraisal team leader Dean Rokosh. He described the estimating methods as deliberately erring on the conservative side of geological projection techniques. “We didn’t want these numbers to have any hype at all,” Rokosh said.

He predicted that the figures are bound to grow as shale drilling and hydraulic fracturing methods spread across the province, generating results disclosures to the AER that are mandatory in Alberta. Enough data is accumulating for the geological survey to start working on estimating how much of the colossal resource endowment is recoverable with current technology after deducting volumes beyond industry reach because they are under cities and parks.

The estimates to date also cover only the six best-known Alberta shale deposits: Duvernay, Muskwa, Montney, Exshaw, Nordegg and Wilrich. Too little is understood about other, unexplored geological layers with gas and oil potential to enable technical forecasts.

Work is also continuing on an assessment of Canadian shale deposits that underlie both British Columbia and Alberta. BC geology is much less oily than Alberta’s basement, and less explored. A report on the best known and most accessible deposit, the Montney, is being prepared by the AER, the BC Oil and Gas Commission, the National Energy Board and other technical agencies.