A 28-month fight over access to Enbridge Inc.’s oil Mainline ended in defeat Friday for its plan to sell decades-long contracts to fill 90% of the conduit’s capacity for 3 million b/d to a handful of refineries and brokers. 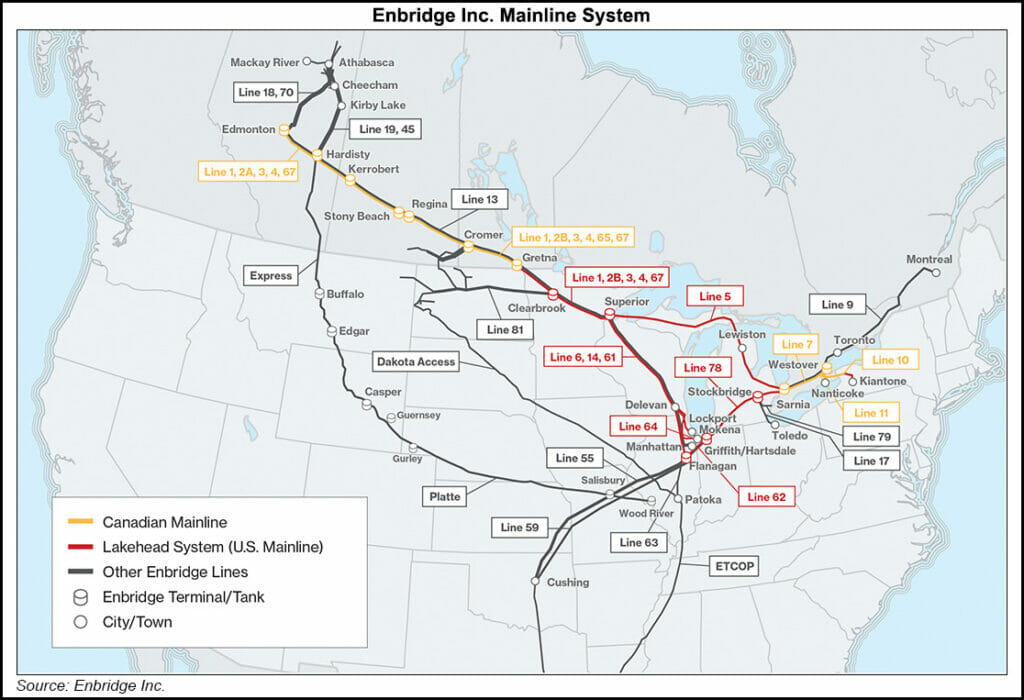 “Mainline contracting would likely reduce the access to pipeline capacity realistically available to certain shippers,” said the Canada Energy Regulator (CER) in a decision to continue a 71-year tradition of filling the pipe with monthly bookings available to all.

“The package of tolls, terms, and conditions in the service offering would result in a distribution of benefits and negative impacts that is uneven and disproportionate,” CER stated.

Enbridge said Sunday it accepted the CER decision and pledged to begin discussions within weeks on a new package of services, tolls and expansion planning with Mainline shippers. The new deal would replace an agreement that expired in June.

“Any negotiated settlement would require CER approval,” said Enbridge. “The negotiating process may take through 2022. We expect the subsequent CER review and decision process to conclude in 2023.”

The pipeline firm assured investors that a financially “manageable” settlement would be sought to prevent harm to its corporate books or share prices. “Mainline throughput is expected to be strong over the next several years and the company’s outlook is positive.”

Enbridge said, “Throughout the regulatory review, the offering has been supported by over 75% of Mainline shippers, by volume, reflecting its competitive toll and overall shipper benefits.”

Enbridge transports about 70% of Canada’s production, as the primary supplier for its eastern provinces as well as the top source of oil imports by the United States.

The Mainline access dispute began in August 2019, when Enbridge launched an open season contract sale amid capacity shortages that caused service rationing. Producer objections prompted the CER to halt the sale and call hearings on the plan.

The rejected Enbridge contracting proposal had “serious and broad-ranging implications for the oil industry, beyond the risks faced by the Canadian Mainline, both now and into the future,” said the CER decision.

The hearings exposed industry divisions on an international scale. Of 15 Enbridge supporters, 10 were U.S. refiners or their marketing arms, according to an opposition filing at the CER by the 170-company Explorers and Producers Association of Canada (EPAC). Of five Canadian firms that backed Enbridge, three had corporate affiliations with U.S. refineries.

The Enbridge proposal spelled a historic change for the worse for producers, said Roland Priddle, a retired chairman of the CER’s ancestor National Energy Board, in a report on the oil Mainline’s role in Canadian industry evolution done for the CSG.

“The support that Enbridge has marshaled for the [service contracting] application does not represent the Canadian public interest: it is biased in favor of U.S. refiners and against Canadian crude oil producing interests,” wrote Priddle.

The CER decision said Mainline contracting posed “at least some risk of high magnitude price impacts” on Canadian oil. “Pure producers, unlike many integrated producers, do not have refining operations that could experience counterbalancing benefits,” said the CER.

“Even short-term impacts could cause meaningful financial harm to producers and the governments that rely on them for royalties and tax revenues,” said the decision.

Mainline contracting could also overcharge Canadian producers for delivery service, said the CER. “The proposed tolls could produce unreasonable returns and unreasonably exceed cost of service tolls on a sustained basis on the Canadian Mainline.”

The CER rejected Enbridge explanations of its contracting proposal as necessary to prevent losses of Mainline oil traffic and to provide secure foundations for future capacity addition projects.

Still, Mainline oil traffic losses would be a small fraction of its room for 3 million b/d, said the decision against contracting. Cancellation of the 830,00 b/d Keystone XL project erased potentially big new competition against Enbridge, added the CER.

“Long-term apportionment [service rationing] could provide a reasonable signal that additional capacity would be utilized, particularly when combined with analysis of crude oil supply and markets carried out by Enbridge and industry associations,” said the CER.

“Enbridge has successfully expanded the Enbridge Mainline on numerous occasions using the same type of information that is available today in the absence of Mainline contracting.”