Canadian regulators have proposed introducing a new class of tank cars to transport flammable liquids by rail, requiring shippers to begin phasing out what they consider to be the most dangerous rolling stock for crude oil in two years for a complete transition by 2025. 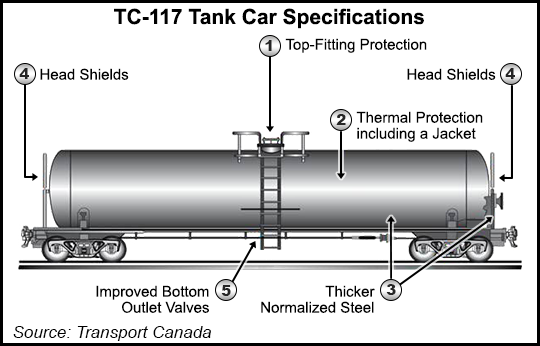 Meanwhile, a committee in the House of Commons released a list of 10 recommendations for transporting dangerous goods, including two that specifically target DOT-111 tank cars, which officials in Canada and the United States have said should be removed from service due to dangerous design flaws (see Shale Daily, July 25, 2013).

In an update released Wednesday, Transport Canada said it was continuing to work toward enacting a final rule for higher standards for tank cars, which would include requirements for thicker steel, half head shields and top fitting protection (see Shale Daily, Jan. 14, 2014). But it said the Transportation Safety Board (TSB) was continuing to recommend even tougher standards, while the Transportation of Dangerous Goods General Policy Advisory Council — created by the Transport Ministry in 2013 — and others were recommending a “harmonized standard” across North America.

Transport Canada said the new standard, formerly called TC-140, would now be named TC-117. “It would require a tank car used to transport flammable liquids to be jacketed, thermally protected, with thicker steel, full head shields, top fitting protection and [a] new bottom outlet valve,” the department said. “The proposed regulation would require industry to manufacture new tank cars used to transport flammable liquids to meet the TC-117 requirements, once it is in force.”

The timeline also calls for phasing out CPC-1232 tank cars. Non-jacketed CPC-1232 cars would be barred from transporting crude oil and ethanol after July 1, 2023. Transport Canada has proposed banning four types of cars — jacketed CPC-1232 cars in crude oil service, all remaining jacketed and non-jacketed DOT-111 cars, and all CPC-1232 tank cars — from transporting crude oil, ethanol and all remaining flammable liquids (PG I, II and III) by May 1, 2025.

“[We are continuing] to work in close collaboration with the U.S. Pipeline and Hazardous Materials Safety Administration and the Federal Railroad Administration to develop stricter requirements for tank cars carrying flammable liquids in North America,” Transport Canada said. “The U.S. is following its own regulatory processes and will make its own decisions on this standard.”

According to Transport Canada, there are ongoing discussions with its counterparts in the United States to enact braking requirements, including ECP braking, into operating rules, rather than have them be a part of tank car standards.

Transport Canada said there were about 147,000 TC-111 tank cars currently in service transporting flammable liquids in North America. Of those, about 80,000 were built before 2011. The department estimated that an additional 7,500 jacketed tank cars adhering to the TP-14877 or CPC-1232 standards will be built for crude oil service in 2015 — leading to about 115,000 tank cars with those standards in service transporting crude oil and ethanol by the end of 2015.

In an 84-page report, the House of Commons’ Standing Committee on Transport, Infrastructure and Communities issued 10 recommendations to Transport Canada, including that Transport Canada:

Last week, a 105-car BNSF Railway Co. train loaded with Bakken crude derailed and caught fire near Galena, IL. There was another incident in February involving a 109-car CSX Corp. train that derailed and burned in southern West Virginia (see Shale Daily, March 6; Feb. 17). All of the tank cars in both incidents were CPC-1232.