A glut of light oil supplies from tight oil fields into the Midwest has depressed regional prices, making it imperative for Canada’s oilsands producers to find alternative markets for their product, consultancy IHS CERA said in a Jan. 14 report. 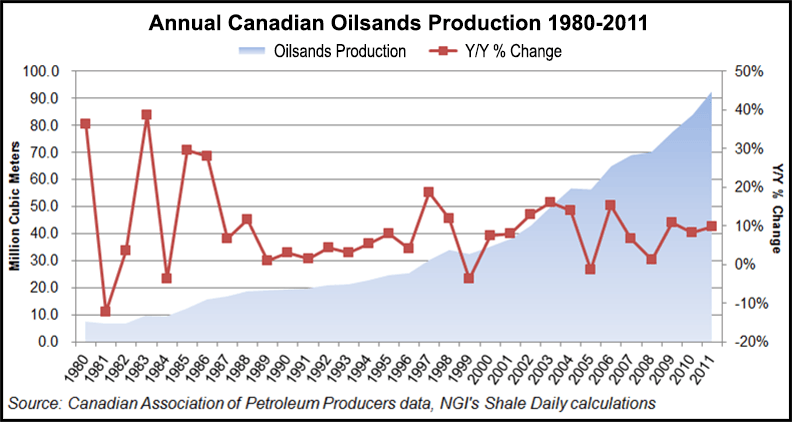 Currently, 80% of Canada’s oilsands exports are consumed in the Midwest.

The report projects that oilsands production will increase from 1.7 million b/d to 3.2 million b/d in 2020. The industry has attracted a variety of major producers such as Royal Dutch Shell plc, whose oilsands operations have produced more 500 million bbl since production began in 2003 (see Shale Daily, Aug. 22, 2012).

IHS estimates that there are 168 billion bbl of economically recoverable oil in the oilsands. That is almost twice as much oil as can be economically produced from North America’s tight oil fields. The oilsands produce heavy crude made of bitumen, and refineries often need to make modifications in order to process it.

The destination of oilsands production will depend on the uncertain fate of pipeline projects that provide market access. There could be as many as nine additional pipelines connecting the oilsands in Western Canada to other parts of Canada or the U.S. Gulf Coast, but only one of the pipelines is in the construction phase. TransCanada Corp.’s Keystone XL oil pipeline from Hardisty, AB, to Port Arthur, TX, would have a capacity of 700,000 b/d, but progress has been blocked so far by the state of Nebraska and the U.S. State Department (see Shale Daily, Jan. 9).

China is the export market with the most potential, according to the IHS report. It lacks refiners capable of processing heavy crude, but is expected to double its refining to about 20 million b/d by 2030. With a refining capacity of 2.4 million b/d of heavy crudes, the U.S. Gulf Coast is another growth market. The region’s demand for heavy crude is flat, but Canadian oilsands could replace Mexican and Venezuelan imports.