A mammoth wind-powered hydrogen production project planned in Newfoundland is poised to emerge as a frontrunner to keep the Canadian government’s promise to deliver new supplies for energy-hungry Europe. 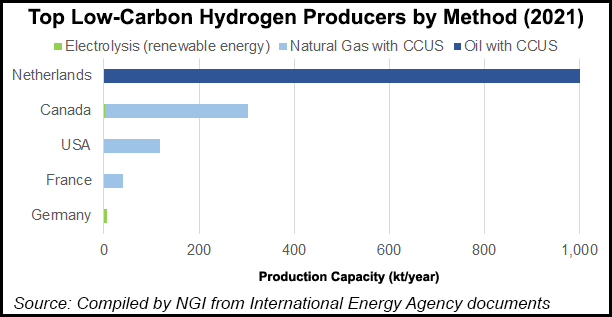 “Germany and Canada are close friends on the world stage,” Trudeau said. “We are tied by our shared commitments to democracy, peace and security, including our support for Ukraine, a clean, healthy future and an economy that works for people.

“I look forward to showing Chancellor Scholz what Canada has to offer, while we further strengthen our relationship, create jobs, and help grow the middle class in both countries.‎”

In March and again in May, Trudeau and Scholz agreed to work together to advance carbon pricing around the world through Canada’s Global Carbon Pricing Challenge and Germany’s Climate Club. And in May, Germany and Canada signed onto the Group of Seven members’ Hydrogen Action Pact.

The hydrogen production plan would include a 54-square-mile spread of 164 turbines. The 1 GW wind farm would power a production plant to extract 30,000 tons/year of hydrogen from water by electrolysis and hold greenhouse gas emissions at zero.

“We expect a strong interest from lenders as large-scale green hydrogen projects are still scarce in the market,” the sponsors’ environmental approval application stated. “Lenders will highly value the location in a politically stable country with ambitious carbon-neutral targets.”

“With Newfoundland and Labrador’s existing workforce with relevant skills in the marine, fishery, hydro, and offshore oil and gas sectors, the province has the best position to help reach not only national but international carbon emission-reduction targets while boosting the economy and creating jobs,” according to the sponsors.

A plethora of hydrogen-related projects are underway across the United States and in Canada.

The Stephenville visit by Trudeau and Scholz, as well as business and provincial leaders, would coincide with an energy trade show before a ceremony to announce the Canada-Europe supply agreement.

The area is renowned as a coastal Newfoundland wind corridor. Tops of giant fans for the proposed power generation turbines would tower about 654 feet above Newfoundland’s Port au Port Peninsula.

The hydrogen output would be converted for delivery and sale into 100,000 tons/year of ammonia as a next-generation fuel for marine vessels. The project’s design includes built-in capacity to triple the size of the wind farm and production volumes in stages.

The schedule sets a target date to begin hydrogen output by mid-2024. A preliminary “concept” estimate anticipated a total cost of about $3.6 billion for the first stage of Project Nujio’qonik GH2. No federal, provincial or European grants or loan guarantees were disclosed.