Canada’s natural gas, oil and coal mining corporations have reduced exploration and development expenses since 2014 because of economic factors and policy changes, which in turn has cut into annual federal tax revenue, the country’s government watchdog said in a new report. 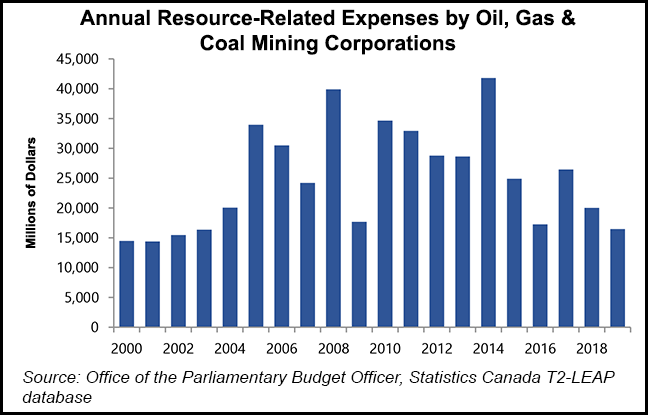 PBO was asked to review deductions for resource-related expenses, as well as the incentives for liquefied natural gas capital investments. The budget office also was asked by Galvez to estimate lost revenue from exceptions to the carbon levy for agriculture.

“Corporations in the oil and gas sector have experienced declining profits due to various factors since 2014, and therefore corporations have had less opportunity to use expense pools to reduce their taxable income,” the PBO noted in the report.

“The revenue impact from exploration expenses and flow-through shares is projected to decline going forward,” the PBO stated. “These estimates do not account for possible interactions with other federal or provincial tax measures, royalty regimes or the accounting treatment of such expenses.”

Although the national tax accounts include coal activity, which qualifies for the fossil fuel deductions, oil and natural gas account for most of the federal government revenue, the PBO noted.

Galvez has a motion in the Canadian Senate that would declare the country to be embroiled in an urgent national climate change crisis. No vote has been held on the resolution.

At the recent United Nations’ Conference of Parties, aka COP26, which was recently convened in Scotland, Canada’s Liberal government endorsed a commitment in principle to phase out “inefficient” fossil fuel subsidies.